By Laura Caseley, writer at LittleThings

Loving dog owners, no doubt this has happened to you before: while on a walk, everything is totally normal -- until your dog starts doing something very strange...

Well, it might have been any number of strange things: maybe the dog shuffles around mid-deed, leaving a trail. Maybe he turns in circles for what seems like a thousand times.

Or maybe, and sometimes most unsettlingly, the dog stares deeply and soulfully into your eyes -- while pooping. What is going on here?

Dogs are actually full of fascinating facts and behaviors, like why their fur smells so weird when it gets wet.

As you already know, they're way more than just simple animals. They're full of complex emotions and psychology, but if you don't know what to look for, it can just look downright weird!

Check out some of the reasons behind your dog's strange pooping habits. Some are simply your dog's personal preferences, but some of them are signs of something more serious.

So the next time you're out on a walk with the pooch, pay attention! Your dog won't mind -- they walk around naked.

You're Taking A Walk, And Suddenly, It's That Time... 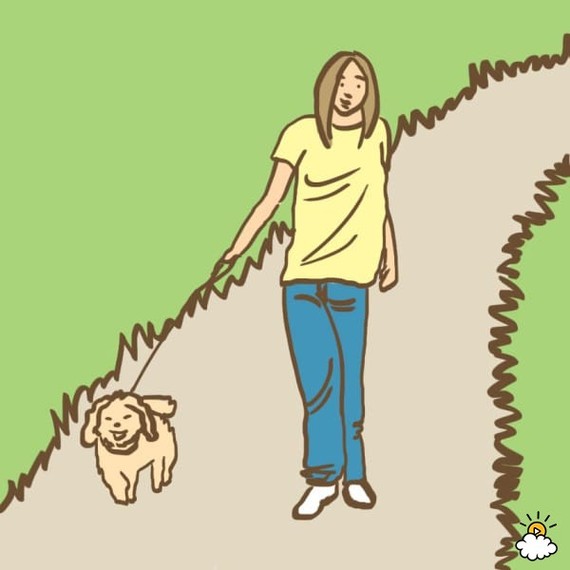 If you've ever owned a dog, then you know all about everything that comes along with it, namely the times when your dog stops and does his business.

While you're digging a plastic bag out of your pocket for cleanup, you might notice that your dog seems to have a little ritual happening.

But what does it mean? 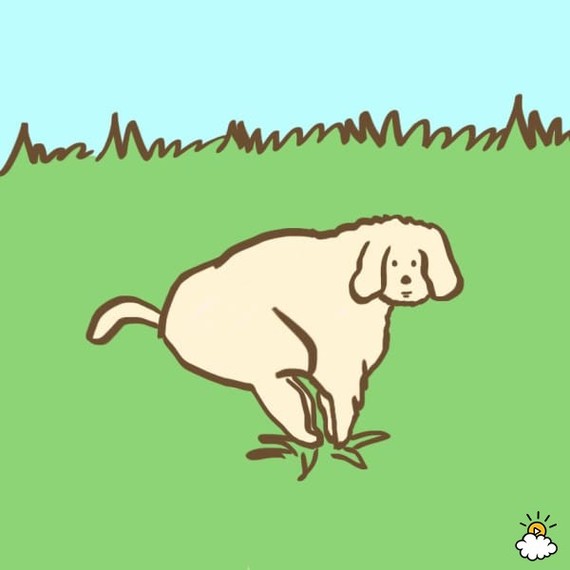 For humans, pooping is not generally the time to lock eyes, but dogs don't worry about things like that. They're not staring at you to ask for privacy. In fact, quite the opposite.

In the wild, a defecating animal is vulnerable. By staring at you, a member of their pack, your dog is making sure that you're keeping watch for any potential baddies, and is watching your body language for signs of approaching danger.

So if your dog is staring at you, don't feel awkward. It means she trusts you!

It also might be why some dogs insist on sitting with you while you're in the bathroom. They're looking out for you! 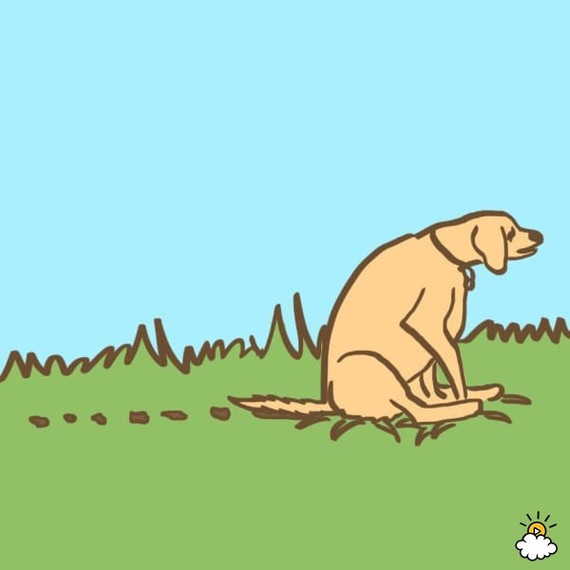 If your dog decides that mid-poo is the time for a little stroll, it's actually not that weird, although it is annoying if you have to pick it up.

Dogs will sometimes take a few steps because the motion aids with the passage of stool. Other times, it's just that there's a really interesting smell a few inches away.

If your dog scoots, though, it means that they may be trying to clean off his bum, or that the glands there needs to be expressed. If you notice it happening a lot, talk to your vet. 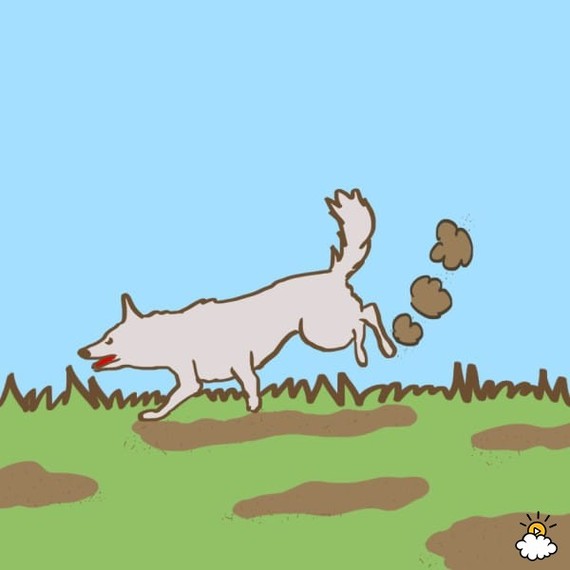 After finishing up, some dogs like to kick up their back feet, along with clumps of grass, soil, and poo. But why make even more of a mess?

Well, your dog is actually cleaning up. Kicking away waste like this is similar to how cats kick litter over their poo at home.

In addition, scraping their feet over the ground allows glands in your dog's feet to be expressed, so it doubles as marking their territory. 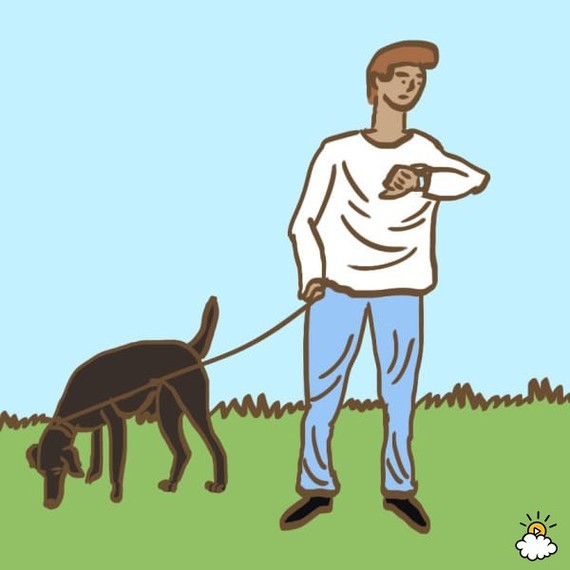 Dogs don't just poop out of need, but also to leave markers of their territory.

It's kind of like the canine equivalent of humans leaving notes or graffiti to point out to others where they've been.

So if your dog sniffs around for what seems like ages, it's because she's staking out her perfect place where her "information" is sure to be noticed. 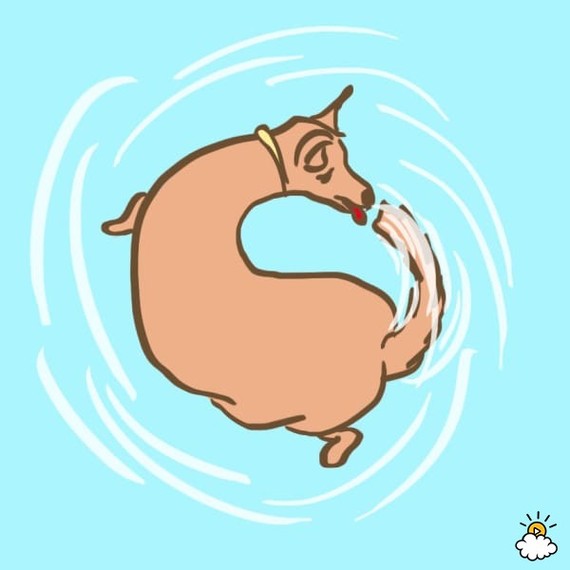 Dogs like to turn in circles before pooping, just like they do before laying down for a nap.

By turning in a circle, it allows your dog to get a quick idea of what's around him, and to make sure it's a safe place to squat. 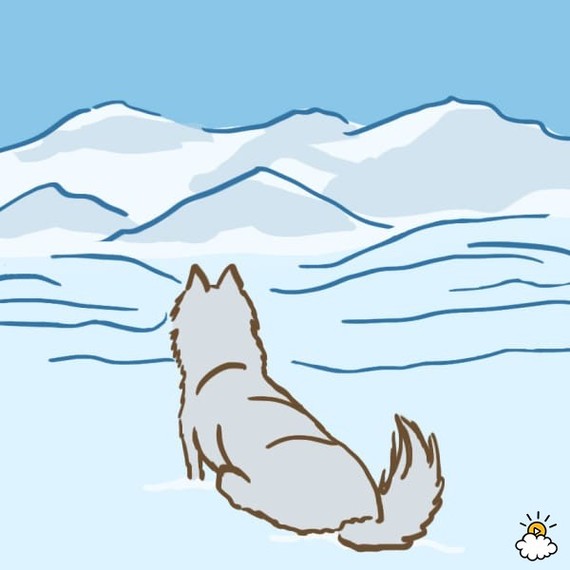 A team of Czech and German researchers found that many dogs, while pooping, will align their bodies along a north-south axis, meaning they'll point north or south.

This shows that dogs may be magneto-sensitive, or sensitive to the Earth's magnetic field, but will only exhibit this behavior when the magnetic field is calm.

We're still not sure why they do this, but it may have to do with using the time to reorient themselves in space.

It's like the dog version of catching up on some reading while on the toilet. 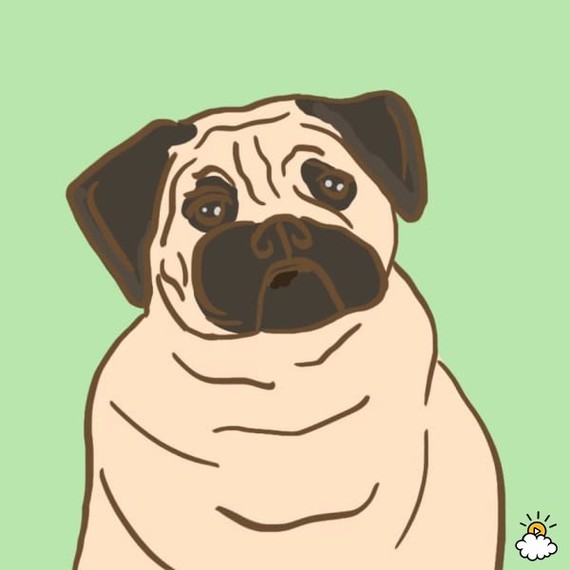 By far the grossest habit, this one sees dogs snacking on their own, um, product. We like recycling, but this is really taking it too far.

It can also happen if a dog is feeling anxious or stressed, or if they eat a low-nutrient dry food.

If you see this behavior, talk to your vet about switching up your dog's diet or giving them a dietary supplement with their meals, and have them checked for any digestive issues. 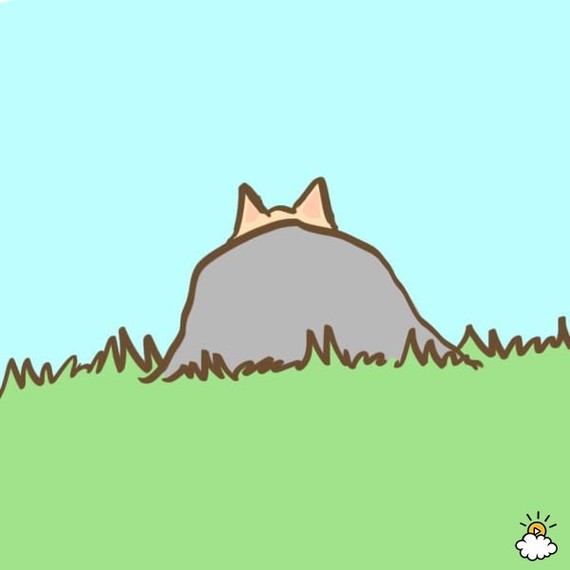 Like humans, some dogs won't go if someone's watching. Again, this has to do with feeling secure while in a vulnerable position.

Just like with staring, this is simply a habit that means your dog feels more comfortable with some privacy as opposed to a companion. It's totally normal.

But Whatever They Do, They Love You! 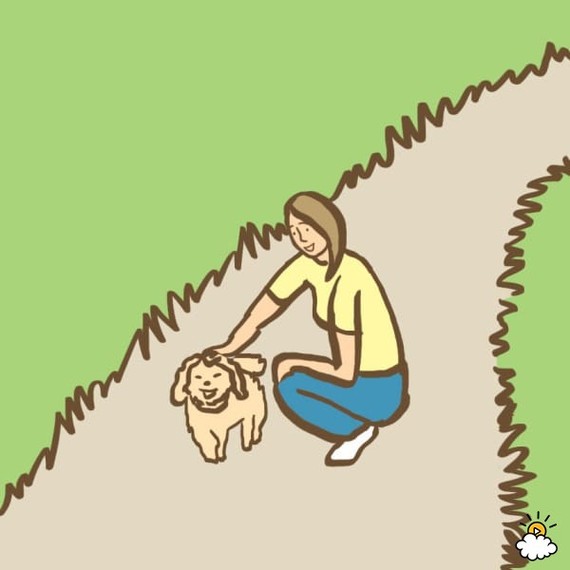 Just like humans, no two dogs are ever alike, and they each have their own quirks and preferences. They might seem a little strange, but it's part of what makes your dog your dog.

Be sure to keep an eye on your dog's habits so you can learn what makes them most comfortable.

If their habits or behaviors change, talk to your vet.

What weird habits does your dog have? Let us know in the comments!

And be sure to SHARE with anyone who's ever been weirded out by a staring dog!