A brilliant "ring of fire" has been spotted in deep space, giving astronomers a rare glimpse of a galaxy 12 billion light-years away.

The near-perfect "Einstein ring" was captured at a super-high resolution of 23 milliarcseconds by the Atacama Large Millimeter/submillimeter Array (ALMA), a ground telescope in the Atacama desert in Northern Chile. (Scroll down for images.)

"With the astounding level of detail in these new ALMA images, astronomers will now be able to reassemble the information contained in the distorted image we see as a ring and produce a reconstruction of the true image of the distant galaxy," ALMA deputy program scientist Catherine Vlahakis said in a written statement. 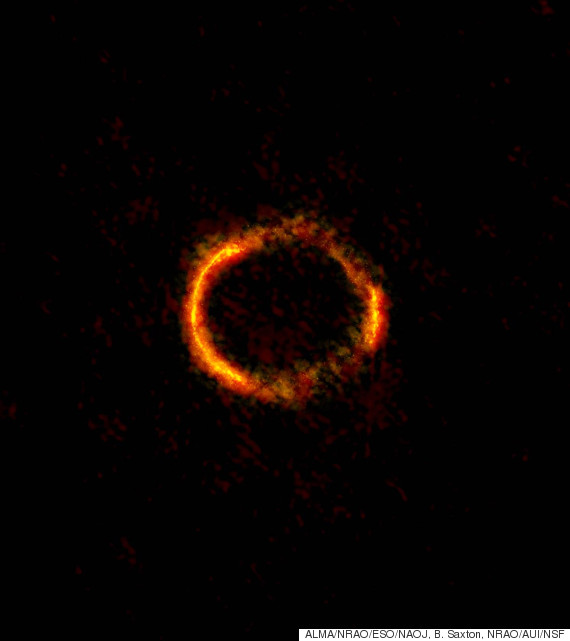 ALMA image of galaxy SDP.81. The bright orange central region of the ring (ALMA's highest resolution observation ever) reveals the glowing dust in this distant galaxy. 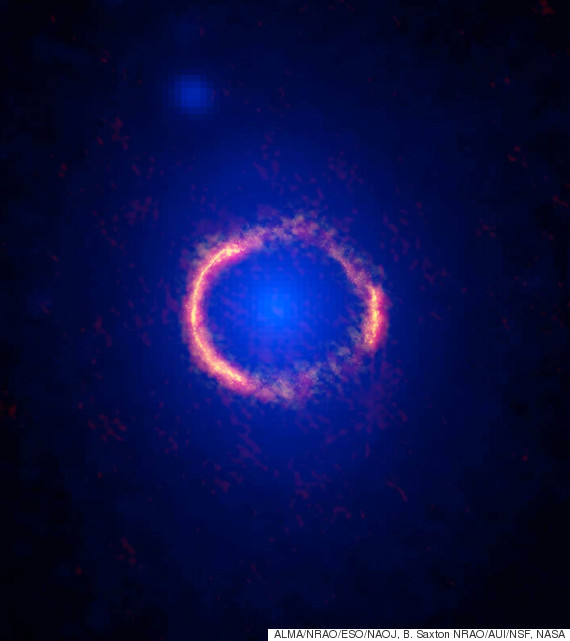 ALMA/Hubble composite image of galaxy SDP.81. The bright orange central region reveals the glowing dust in this distant galaxy, and the diffuse blue element at the center of the ring is from an intermediate galaxy, as seen with the Hubble Space Telescope.

The images feature the active star-forming galaxy SDP.81, which appears magnified and ring-like due to a strange phenomenon called gravitational lensing.

The phenomenon is predicted by Albert Einstein's theory of general relativity, which says that gravity bends the path of light. If two objects line up just right, the gravitational pull from one can bend the light coming from the other -- like a lens -- and even shape that light into a perfect ring as viewed from Earth. (To see how it works, check out the animation below.)

"Gravitational lensing is used in astronomy to study the very distant, very early Universe because it gives even our best telescopes an impressive boost in power," Vlahakis said in the statement.

A paper describing the research was submitted to the online publication arXiv.org on April 3, 2015.