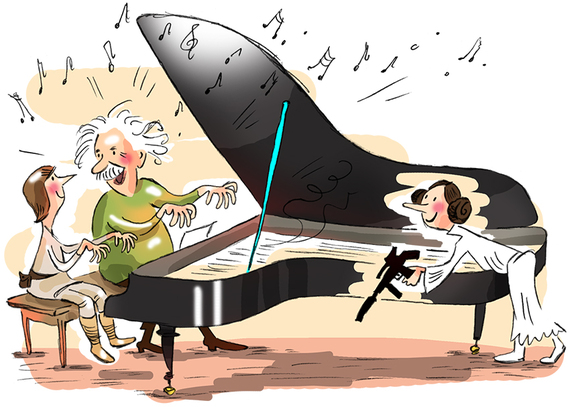 This month marks the 100th anniversary of Albert Einstein's theory of general relativity. Amid all the celebrations and conferences, it is easy to forget about the real human being who actually did it. But if you live in Princeton, and his piano is in your living room, he is always present.

Everyone thinks of Einstein musically as a violinist. At six, he took lessons and proved to be a talented pupil. After he became famous, he willingly gave benefit concerts on the best stages in the world. He sometimes said that if he had not chosen scholarship, he would have become a musician.

His love for music was nurtured from the cradle. His mother Pauline was a pianist and brought music into his family. On his violin he played solely the work of others -- preferably Mozart, Bach, Corelli and Schubert. His musical mentors stopped somewhere in the mid-nineteenth century.

But while playing the piano, he was daydreaming. There are many stories about Einstein, and who knows which are true. But one of them is that while improvising at his piano, he daydreamed about his relativity theory. Music and mathematics came from the same wellspring in his brain.

Einstein purchased his Bechstein grand piano when he lived in Berlin. He often played music at home with his friends. When he left for America in 1933, fleeing from the Nazis, he shipped his piano. I imagine it bobbing across the ocean in his wake.

In Princeton, he put the piano in his small white at 112 Mercer Street. Here his friends and colleagues would often gather to make music. After Einstein died in 1955, and later his stepdaughter Margot died in 1986, the Bechstein might have gathered dust someplace. But a generous patron took care of it and had it restored to its full splendor.

I am intrigued by this instrument, built in Berlin at N.5.7. Johannisstrasse, as the black lettering on the gold-colored interior tells me. Writing to the Einstein Archives in Jerusalem and to the manufacturer, C. Bechstein Pianofortefabrik, I try to learn more about this piano. It's a frustrating search, especially since a large part of the Bechstein archives was destroyed during the allied bombing of Berlin in 1945. Ironically, members of the family, Edwin and Helene Bechstein, were firm supporters of Hitler.

Today the piano stands in my living room at the Institute for Advanced Study, gleaming and shining like a huge black bird unfurling its wings. Its sound is soft and round, perfect for Einstein's beloved chamber music -- sometimes described as an intelligent conversation between good friends.

When visitors see it, they always want to sit at the keys, as if gathering inspiration from its presence. This past Halloween, a little boy and his sister appeared at my door in their Star Wars costumes. He stepped forward, raised his sword and said seriously: "Trick or treat!" Soon they were rummaging in the candy jar. He immediately unwrapped some toffee and put it in his mouth.

"May I briefly play it?" He said and pushed his sister down the hall before I could answer.

He sat at the keys for a moment, a little boy with curly red hair. Then he pushed up the sleeves of his costume and began to play, Twinkle, Twinkle, Little Star. His legs dangled below the bench.

"Great sound," he said firmly as he stood up.

Then he ran to Princess Leia, still in the hallway, chewing on her Milky Way.

"Thank you for letting me play!" he shouted.

Later that night, when I was turning out the lights, I seemed to hear some faint piano music in the living room. And as I closed the lid of the Bechstein, I noticed that the keys were still sticky.