Unless you have been living under a rock, by now you have heard that gravitational waves, predicted by Albert Einstein, have been discovered. These are two monumental achievements that ought to be lauded. Einstein for seeing the ramification of the theory of general relativity that he worked so hard to accomplish, and to the LIGO team for steadfastly pursuing the goal to measure the ripples in spacetime directly, and with that create a new type of telescope that opens up a portal, as it were, to a universe that is unfamiliar to us. These telescopes use gravitons after all, not photons, to "see". And with gravitons we can see further back in time than is possible with photons. We might one day "listen" to the birth of the universe, through the ringing of gravitons gently shaking the Earth.

What is less well known is that Einstein struggled mightily with the theory of gravitational waves. The fact that Einstein was a genius but nevertheless mortal is, by now, somewhat known. After all, it took him five tries to get the field equations of General Relativity right. Mind you, I don't fault him for that. Instead, I think he ought to be held in regard precisely because he dared to publish papers that were flawed, and there is ample evidence that he submitted them for publication in full knowledge that the theory was not finished. He was also fully aware of just how important this work was. Legendary physicists have opined that had Einstein not figured out these equation then, we might still be struggling with the theory. 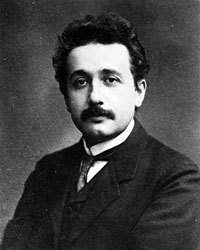 In 1916, Einstein submitted a paper to the "Sitzungsberichte der Königlich-Preussischen Akademie der Wissenschaften zu Berlin". This may seem like an odd journal, but you have to understand that 1916 was a very different time than today when it comes to scientific publishing. You can translate the title to mean "Meeting Notes of the Royal Prussian Academy of Sciences in Berlin". But this does not imply that Einstein actually gave a talk at the Prussian Academy. Instead, as he was a member of said academy, he could publish in the journal simply by sending in the paper. Without peer review. (Note that until recently, even the US National Academy of Sciences had such a publication track for members).

The paper that he sent in, entitled "Näherungsweise Integration der Feldgleichungen der Gravitation", contained a bombshell. The translation of the title seems harmless: "Approximate integration of the field equations of gravity". ("Integration" here just means "Solution"). Those field equations are, of course, Einstein's equations. He says he solves them approximately, because he considers small deviations from the exact solutions, something that you would do in order to treat fluctuations. These fluctuations would be gravitational waves, and Einstein was naturally led toward them. This is the paper that is now acknowledged worldwide of having introduced gravitational waves, 100 years before their direct discovery by the LIGO team.

Except that the paper is wrong. It contains a monumental mistake in the calculation. This was not a simple mistake, because it changed the apparent nature of the radiation dramatically. If this was a different blog I would lead you precisely through the mistake to see how it could have happened. In my view it was simply an oversight (a 'prime' in his notation got lost). Unfortunately for him, the results of the mistake were, in hindsight, catastrophical. One of the defining characteristics of gravitational waves (as Einstein later figured out), is that it does not have a "dipole" character as the electromagnetic radiation (for example, light). In dipole radiation, the signal you "see" is due to charges moving to and fro. But gravitational waves are not like that (that is, being due to mass densities moving back and forth). Rather, the radiation must have a quadrupole moment, so that density is compressed in one direction, and expanded in the orthogonal directions. It is precisely this feature of the radiation that explains the "L"-form of the LIGO interferometers in Hanford, Washington and Livingston, Louisiana, that opened up this new chapter in our exploration of the universe.

Einstein's reasoning, mind you, was flawless as always. In fact, he was perhaps the greatest intuitive physicist who ever lived. But he struggled (by his own admission), with mathematics (something I can say I share with him). I don't know how or when he realized his mistake, but he published another article in the "Sitzungsberichte", simply entitled "Über Gravitationswellen", or "On Gravitational Waves", two years later. He begins that article in his characteristically detached tone, writing:

Let me translate this for you.

"But since my exposition of the subject-matter at that time was not sufficiently transparent and furthermore blemished by a regrettable error in calculation, I have to return to the matter here one more time."

As a side note, I find the manner in which he describes the error here (and further below in the article) delightful. In a sense, he does not think of the discovery (gravitational radiation) as "his". It was there all along, and he apologizes for its "disfigurement" at his hands.

For us readers, Gravitational Waves 2.0 is a gift. It is indeed clearer than 1.0, even though it is not like Einstein did nothing but work on this paper for two years after discovering the error. In between he wrote six other articles for the Sitzungsberichte (among which an obituary for Karl Schwarzschild, the fellow after which a black hole's radius is named after). And ten other articles in various journals.

Once he realized the mistake, he was able to take the calculation much further, and derives the famous "quadrupole formula" as Equation (30) in the 1918 paper, and writes immediately:

"One can see from this result that a mechanical system that maintains spherical symmetry cannot radiate, in contrast to the result--disfigured by a calculational mistake--of the previous paper."

So rightfully we should celebrate 1918 as the year that Einstein discovered gravitational radiation, but I think it is clear that he knew in 1916.

While the 1916 mistake is not very well known, Einstein's repudiation of gravitational radiation (in error again, and corrected this time before publication) twenty years later is quite well-known. As you can read in the last linked reference, Einstein submitted a paper to the Physical Review in which he "shows" that gravitational waves do not exist. The paper was reviewed (as had become the norm at that US journal), and the reviewer carefully read it, and found it to be wrong. (Einstein had chosen a bad coordinate system).

Einstein was furious. In a nutshell, he wrote to the editor that he (the editor) did not have permission to show the paper to anyone, and that he would never publish in that journal again. Clearly, Einstein was not used to peer review as we know it today. Fortunately, Einstein's co-author Nathan Rosen was in the room when Einstein threw the letter into the trashcan (and kicked it for good measure), retrieved it from its confines and revised the paper according to the reviewer's concerns. The way we do it now. But he submitted it to a much less well-known the journal, the Journal of the Franklin Institute.

I think their are some lessons for us today in this hundred year-old story. Progress in the sciences is not a linear affair. Progress moves via burps and jumps, sometimes going backwards, but moving forwards on average. Science is made by people, and people are fallible. We should always remain humble in the sense that we are only discovering the laws of nature--we are not making them. And mistakes are part of the equation. If we are timid, we would wait for decades before having the temerity to go forward with our discoveries. I much prefer Einstein's brash approach to publish first, and see how the chips may fall, but it is certainly not for everybody.

Finally, I feel like I should acknowledge the advantage of having a co-author that can find your mistakes before they go to print. Einstein wrote most of his papers as single author, and that worked well for him most of the time. But even he could afford to have been saved by a co-author, as I have been many times.

Scientist working at the intersection of physics and life sciences