Opposition to the proposed design for a memorial to President Dwight Eisenhower has reached a fever pitch, with high-level officials in the Obama administration and senior lawmakers on Capitol Hill adding to the chorus of calls to halt momentum on the project.

This week, the Eisenhower family said it still opposed the design concept for the memorial on the National Mall to the former president and supreme commander of the allied forces during World War II.

Interior Secretary Ken Salazar also weighed in on the design, saying it was important for the 11-member Eisenhower Memorial Commission to continue working to put forth a proposal that the family can get behind.

Rep. Jim Moran (D-Va.), who sits on the Appropriations Committee, which grants the Memorial Commission the bulk of its funding, said in a recent letter obtained by Roll Call that he, too, doesn’t care for the design.

And Rep. Darrell Issa (R-Calif.) announced he would withhold his support for the design should the commission go ahead with its July 12 meeting with the National Capital Planning Commission, which must approve the proposal in order to break ground.

Issa is a voting member of the NCPC, in his capacity as chairman of the Oversight and Government Reform Committee, which has jurisdiction over the District of Columbia.

But the committee also has investigative and subpoena authority over the federal government, and to that extent, Issa has requested correspondence from the General Services Administration to determine whether the selection of renowned architect Frank Gehry was handled properly. Some stakeholders have asked whether the GSA, which oversaw the selection of the architect in an open competition, was using a transparent and inclusive process.

“As both chairman of the Oversight Committee and a voting member of the National Capital Planning Commission ... it is my duty to ensure that the design selection process is as transparent as possible and the memorial itself properly honors a man of President Eisenhower’s stature,” Issa wrote in a letter in a letter to Rocco Siciliano, chairman of the Eisenhower Memorial Commission. “I would request that you and your fellow Commissioners refrain from making a recommendation to [NCPC] until after all documents have been produced and there has been an opportunity for review.”

Issa wrote to the GSA in early March to request information that could shed light on the process the agency used to select Gehry. Having heard nothing back, he followed up with the agency on May 18 to say that the committee would take more drastic steps if it doesn’t get answers.

“If the Administration cannot provide complete answers and produce responsive documents as requested, the Committee may need to consider the use of compulsory process to obtain this information,” Issa wrote to acting GSA Administrator Dan Tangherlini.

Roll Call reported earlier this month that Issa was perhaps in the early stages of launching a formal investigation into this matter.

Members of the Eisenhower Memorial Commission — among them eight Members of Congress ­— had hoped that Gehry’s revisions to his original design would assuage concerns and bring a drawn-out process to a conclusion by the end of this year.

“Time is of the essence,” Sen. Daniel Inouye (D-Hawaii), a World War II veteran, said at a public hearing on May 15 when the revised design was unveiled. “There is a national interest in making sure this monument is completed to remind the next generation of Americans what America has gone through and the great leaders we’ve had.”

Since the Eisenhower family originally objected to the former president being depicted as a sculpture of a young boy looking out onto a tableau of his future accomplishments, Gehry changed the statue to be that of Eisenhower as a young man.

And bas-reliefs, which had also been criticized, were made three-dimensional statues: One depicts Eisenhower speaking with 101st Airborne division soldiers at Normandy. Another is of the former president as depicted in the photo “The Elder Statesman,” taken in 1966 by Yousuf Karsh.

The family and others, however, remain concerned about the stability of the metal tapestries that depict Eisenhower’s boyhood in Abilene, Kan.

Despite the appearance of new obstacles, Eisenhower Memorial Commission spokeswoman Chris Cimko told Roll Call that the organization is unfazed.

“We are happy to have heard from the Eisenhower family. We are pleased that there were elements of the design that they liked,” she said. “We share their concerns about the longevity of the metal tapestries and the testing, which is going on now.”

Cimko added that the commission stood by its selection process for Gehry: “We have great confidence in the integrity of the process.” 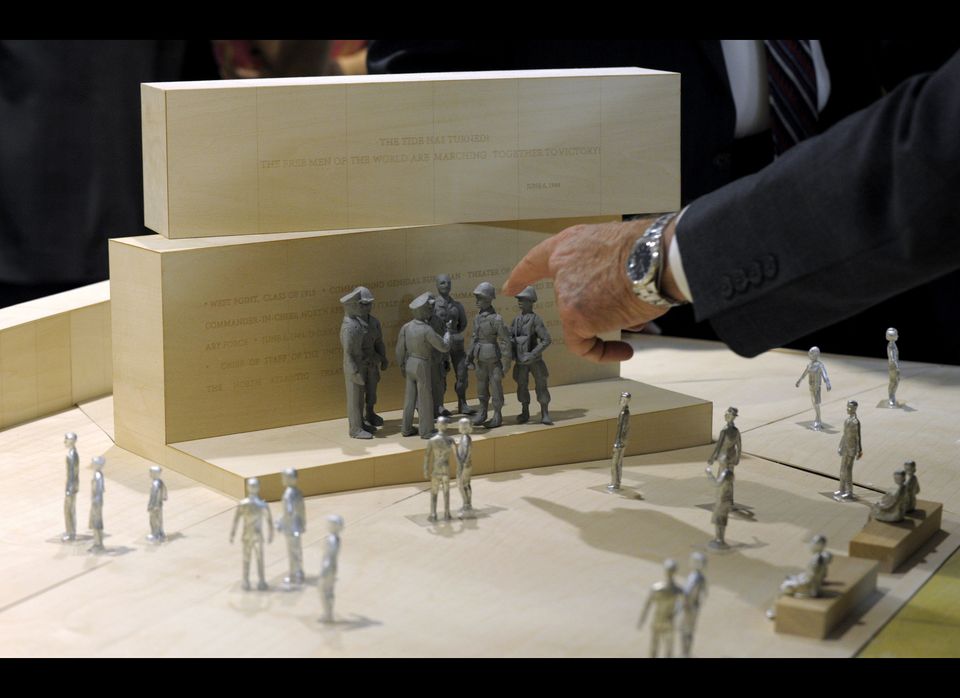