In a damp Spanish cave, Alistair Pike applies a small grinder to the world's oldest known paintings. Every few minutes, the dentist-drill sound stops and Pike, an archaeologist from the University of Southampton, UK, stands aside so that a party of tourists can admire the simple artwork — hazy red disks, stencilled handprints, the outlines of bison — daubed on the cave wall tens of thousands of years ago. He hopes that the visitors won't notice the small scuff marks he has left.

In fact, Pike's grinder — and the scalpel that he wields to scrape off tiny samples — is doing no harm to the actual paintings, and he is working with the full approval of the Spanish authorities. Pike is after the crust of calcite that has built up over the millennia from groundwater dripping down the wall. The white flecks that he dislodges hold a smattering of uranium atoms, whose decay acts as a radioactive clock. A clock that has been ticking ever since the calcite formed on top of the art.

The results of an earlier round of sampling in El Castillo cave, published last June, showed that the oldest of the paintings, a simple red spot, dates to at least 40,800 years ago, roughly when the first modern humans reached western Europe. Pike and his colleagues think that when they analyse the latest samples, the paintings may turn out to be older still, perhaps by thousands of years — too old to have been made by modern humans. If so, the artists must have been Neanderthals, the brawny, archaic people who were already living in Europe.

The answer won't be known for at least a year, but if it favours the Neanderthals, it could tip — if not resolve — a debate that has rumbled for decades: did the Neanderthals, once caricatured as brute cavemen, have minds like our own, capable of abstract thinking, symbolism and even art? It is one of the most haunting questions about the people who once shared a continent with us, then mysteriously vanished.

An early date for the paintings would also be a vindication for the slight, dark-haired man watching as Pike works: João Zilhão, who has emerged as the leading advocate for Neanderthals, relentlessly pressing the case that these ice-age Europeans were our cognitive equals. Zilhão, an archaeologist at the Catalan Institution for Research and Advanced Studies at the University of Barcelona in Spain, believes that other signs of sophisticated Neanderthal culture have already proved his point. But he is willing to debate on his opponents' terms. “To my mind, we don't need that evidence,” he says of the paintings. “But I guess for many of my colleagues this would be the smoking gun.”

The front line in the Neanderthal wars runs through another cave: Grotte du Renne, 1,000 kilometres away in central France. As early as the 1950s, excavations there unearthed a collection of puzzling artefacts. Among them were bone awls, distinctive stone blades and palaeolithic baubles — the teeth of animals such as foxes or marmots, grooved or pierced so that they could be worn on a string. They were buried beneath artefacts typical of the first modern humans in Europe, suggesting that these objects were older. A startling possibility loomed: that artefacts of this style, collectively known as the Châtelperronian industry, were made by Neanderthals.

This story was originally published on Nature News. Read the rest of the story here.

El Castillo: Earliest Known Cave Paintings Might Have Been Made By Neanderthals
El Castillo Cave Art 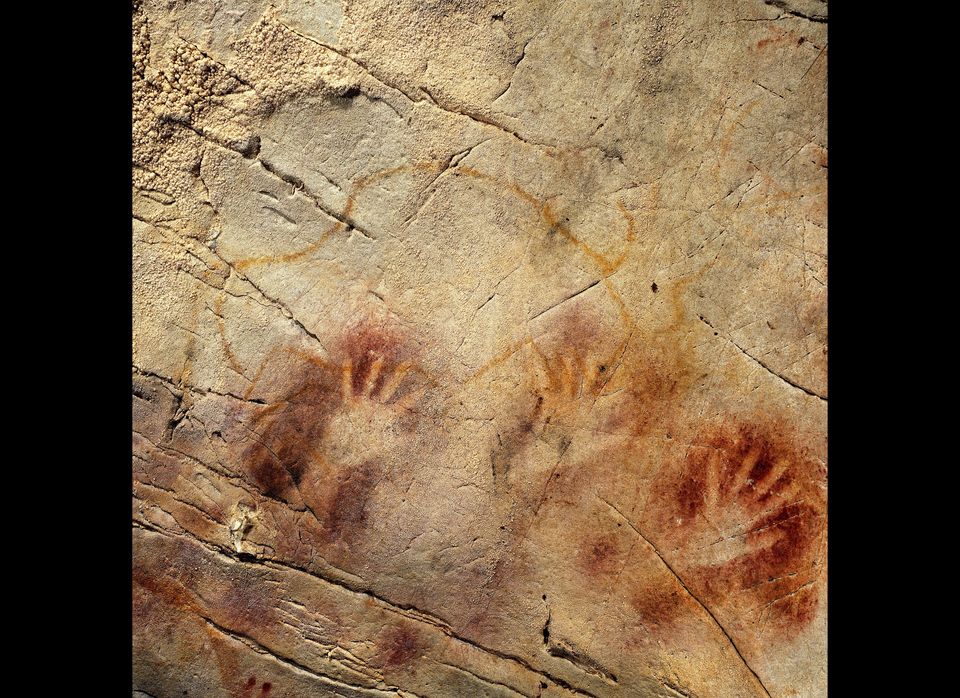 1 / 3
This undated handout photo provided by pedro suara/aaas shows detail of the 'Panel of Hands', El Castillo Cave, Spain, showing red disks and hand stencils made by blowing or spitting paint onto the wall. A date from a disk shows the painting to be older than 40,800 years making it the oldest known cave art in Europe. The bison overlies the hands and is therefore painted later. New tests show that crude Spanish cave paintings of a red sphere and handprints are the oldest in the world, so ancient they may not have been by modern man. They might have even been made by the much-maligned Neanderthals, some scientists suggest but others disagree. (AP Photo/Pedro Saura, AAAS)
AP