New footage shows where one of the world's most wealthy and powerful drug lords escaped a Mexican maximum-security prison.

In the video above, Mexican authorities are seen touring the abandoned house where the escape tunnel ended. They gather around a rectangular manhole-like structure where Guzman is believed to have climbed to freedom. There is also a small kitchen and bed, both in disarray.

The New York Times described the escape route in detail:

The opening in the shower led to a mile-long tunnel leading to a construction site in the nearby neighborhood of Santa Juanita in Almoloya de Juárez, west of Mexico City. The tunnel was more than two feet wide and more than five feet high, tall enough for him to walk standing upright, and was burrowed more than 30 feet underground. It had been equipped with lighting, ventilation and a motorcycle on rails that was probably used to transport digging material and cart the dirt out.

Guzman's capture in the spring of 2014 was considered a crowning achievement in the Mexican government's ongoing war against drug cartels.

This marks the second time that Guzman has escaped from a high-security prison. 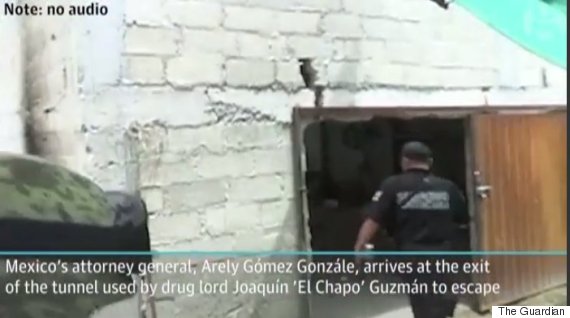 The doorway to the abandoned building where 'El Chapo' escaped.