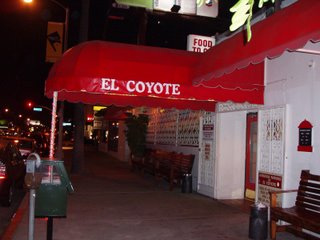 About 70 people gathered at the legendary El Coyote Cafe in Los Angeles' Fairfax District Wednesday morning for a community sit down/brunch to hear Marjorie Christoffersen speak about why she gave $100 to Yes on 8 via the Mormon Church. Marjorie, a lifelong Mormon, is the niece of El Coyote's founder and daughter of the current owner. She receives a salary as a floor manager. El Coyote has 89 employees, many of whom are gay.

Despite the staff delivering chips, salsa and drinks to the waiting guests, tensions were high when Arnaldo Archila, a long time manager and bartender, spoke about Ms. Christofferson and her views:

We don't share her views as the management. They don't press us to do anything that we don't want to do, and we never talk about politics or religion. I don't understand why we got connected to something going on at the top.


Well, El Coyote is involved because 10% of what Marjorie makes from El Coyote goes to the Mormon Church as required tithe, and that $100 she gave to Yes on 8 was in part money paid by gay clientele--and her income was used to strip their rights.

And that's why there's protest called for 7pm tonight.

Then Marjorie herself spoke, shaking and barely able to stand, lieterally supported by her daughters who helped hold her upright as she read from a prepared statement. And it was sickening and saddening to see how her faith had leveraged her salvation and forced her to disconnect her love for her customers, and allowed her, despite that professed love, to deny them a civil right:

I am sick at heart that I have offended anyone in the gay community...you are treasured to me...I've been a member of the Mormon Church all my life and I responded to their request. This was a personal donation, not the El Coyote's. In like fashion, any employee can support anything of its choosing...The restaurant does not support any political group...I don't know of another place on earth where such diversity exists in harmony, joy and mutual respect. I know boycotts are planned...It saddens me that my faith will keep you away from the Coyote. I cannot and I will not, no matter what, change my love and respect for you and your views.


For video footage of Marjorie's statement, and the attendees' responses, click here


Marjorie took only one question, asked by Sam Page, an ex-Mormon: Would she personally make an equal donation to the campaigns to repeal Proposition 8? Before Marjorie could answer, manager Billy Scheoppner announced that El Coyote would make two $5,000 contributions, one to the Los Angeles Gay & Lesbian Center and other to the Lambda Legal Defense Fund. Schoeppner, who is openly gay, asked for suggestions to avert a boycott.

I cannot change a lifetime of faith.


Then one of her daughters added:

It's her personal choice...she loves you guys and she loves this place...The church does not tell you how to vote, they did not say you must vote on Prop 8. They supported and donated to the Yes on 8 situation, campaign...You are not told ever how to vote--very, very rarely.