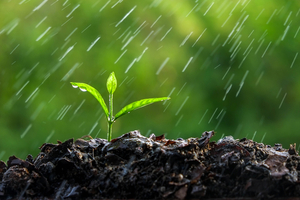 The forecasters predicted it, the young and wild boy-child, El Niño would come. A warm pacific current that often wreaks havoc promised torrential rains for the west coast of the North America continent. We believed in him like the god of water who would bestow wet blessings upon the land. California, my home for the past 39 years, has always been wet and green in the winter with golden dry hills casting the summer. These past few years, the boy went dry, and the rains ceased. 2016 was to be the year of relief, of promise, that El Niño would bring us water. If ever he forsakes us, much of California's agriculture will be under duress.

If the middle of the country is the breadbasket, then California is the fruit bowl and vegetable crate, the land of pistachios, almonds, sweet oranges and fine wines. Does all this bounty depend on the whims of a boyish warm current?

Here in California, our farmers are on the front lines of the climate change battle. Without the Sierra snowpack, which feeds the reservoirs and aqueducts, there will be no water to make the desert bloom. Farmers will plant fewer crops such as onions and garlic because they are just too thirsty for their return price at market. Fields will lay fallow and orchards will wither. The price of food will rise, and our diets will change.

The predicted deluge had not yet materialized in February. The blue skies wore on, ominously clear and the Fahrenheit was far too high. The soils were already dry and baking beneath my feet. The May flowers began blooming, the April catkins dangling with vibrancy and bloom in February, much too early.

We now know that this February was the warmest above average month in recorded history across the globe. It's the fifth straight month that global temperatures were more than 1°C above average. On March 3rd, the average temperature of the world's Northern Hemisphere breached the 2 degrees Celsius above "normal" mark for the first time in recorded history. Scientists agree that when global temperature rises above 2 degrees Celsius, then it will be "dangerous" for mankind and the Earth. We have breached that threshold. As a result, Arctic ice hovers at its lowest levels ever, and they're hauling in snow for the famous doggy Iditarod.

The climate is changing before our eyes.

An ominous study in The Lancet suggests that the impacts of climate change on the global food supply could lead to more than 500,000 deaths a year by 2050. This headline suggests there will be major cultural and social upheaval. In fact, it's likely that many will be plagued with famine and pestilence, which will lead to unrest and perhaps even wars. No warm current can change this course.

We simply have pumped too many greenhouse gasses into the atmosphere, and it is altering our world to a tipping point. One of the reasons I dedicate my life to organic agriculture is because it provides one real solution to this climate threat. If we can get the carbon out of the air and back into the soil by sequestering it through organic methods, it can make a big dent in mitigating our changing climate. Healthy organic soil is the most important aspect of organic agriculture. Most people are soil blind; they walk on it and eat from it but never think about soil health.

The first week of March brought a round of blessed rain. The boy returned with a sort of vengeance, and the waters gurgle vigorously in the creeks. For now, we may have the rain and snowpack we need, but what about the years to follow? We need to change the way we grow food and the way we think about soil. We can no longer rely on a precocious El Niño to deliver our fate.

Rodale Institute: We could sequester more than 100% of current annual CO2 emissions with a switch to widely available and inexpensive organic management practices, which we term "regenerative organic agriculture."

"The Soil Will Save Us": A book about how scientists, farmers, and foodies are healing the soil to save the planet.