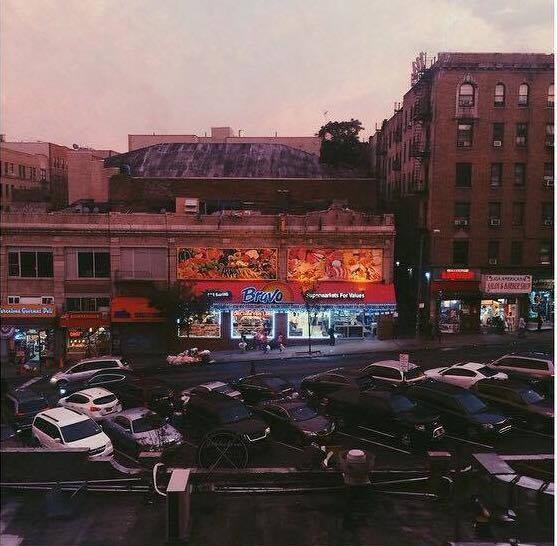 If Atlas opted to bear the weight of an entire planet instead upon his face, maybe then would that very mass encompass the crushing weight of the multidimensional identity lodged upon my mask. Awkwardly sustained by the fragile stature of my neck, this world of people, generations, prejudices, and myself seesaws back and forth upon the tip of my nose as I desperately attempt to maintain some sort of equilibrium. The tightrope walker mustn't stumble; this is the balancing act that I must uphold in order to sustain -- to preserve -- myself.

El refrán dice that diamonds are made under intense pressure, but there are days when the heavens themselves never felt so dense. In the Bronx, every one and their mothers look like me, and I look exactly like them. Los niñitos on my block carry pounds of gorgeously kinky hair upon their heads up until they're old enough to take the heat lashed on by the Dominican salons, an act of alchemy where las hermanas del calor transform baby girl's frizzy crown into silk. "Pelo malo," dice tu mama, to which baby girl responds: "pero mami, mi pelo nunca se he portado mal." I beg to differ; her pelo is mean-as-hell because baby girl's mane swallowed up the salonist's entire comb and coughed it back up into pieces as an act of resistance. Our skin works in much the same way. The latinxs within the community, a blend of the Dominican and Puerto-Rican diáspora, and the hijxs de la diáspora produced from it, waited for winters to bleach their leather skin back to a colonial past, piel stained and blessed by the Sun alongside their Taino/Afro ancestors; others -- the same folxs who'd take delight in the ways in which their hair would shatter timid combs -- did not mind being referred to as "morenita"; they waited patiently for summers to come.

On Sunday mornings, los vecinos would bless you with twenty Hail Mary's and two sloppy kisses to the cheeks. As a child, I'd pay close attention to las vecinas' sharp adobo stained nails; with their right hand, they were ready to snatch any one that came for their life; with their left hand, they mastered the art of measuring the right amount of sasón to add to their special paella de mariscos, an act of love and resistance against the bland-as-hell gringo food that had been introduced by the neocolonialists gentrifying mi barrio. I'd watch Doña Rosa fumble around with her rosary during Wednesday group prayers on the fourth floor in Mami's -- the loud-ass vecina on the fourth floor -- crib. The weight of years creasing the edges of their eyes and mouths revealed the prayers that they would whisper to themselves after taking in the body and blood of their Cristo; they longed for a heaven that would erase the erosion of their faces and spirits. Womyn would decorate their heavily calloused hands in rings that bore their names, while boldly wearing crop tops to reveal the scars etched across their navels -- sometimes from forced c-sections -- as proof of the pride they have raised: their children. Sometimes, mothers don't live long enough to teach their daughters the difference between a caballero and a tiguere; mi mama trato, but fate was not kind to her. I was 13-years-old and had just started my period when she abandoned me for another world, taking with her my love of miracles as well as my love of a white dios that falsely promised salvation to the luchadxr; I only now realize how much this dios hated me for my untamed hair and my wider set nose, much in the same way as the gringos who rebranded my South Bronx as the Piano District hated me. Para el carajo with him. I tell my closest friends now that I don't believe in god (yes, lowercase god) not because I don't believe he actually exists somewhere sitting idly as my mother suffered, but because I want him to know that I am rebelling against his being. I am choosing to believe in myself over him.

The men leave home at 4 p.m. returning to their daughters by 4 a.m. I barely recognize my father in the mornings; he grows older every night. Perhaps they bring back a nickel or two in their pockets. Despite that, they're always rich enough to hand us our sour patch kids, just as they promised. My father's arms, sore from holding a taxi wheel for hours, are still strong enough to pick up both his daughters, and fling them across his shoulders, so that they might be able to reach for something that he was never able to reach himself. Our dreams are now his wishes.

Families crossed entire oceans, far beyond the comfort of native soil beneath their feet, dream after dream deferred, at the slight hope that one day, their great, great, great granddaughter (their final dream: The Great American Dream) will actually be just that: great. I'd like to hope that they didn't look back when they dropped their names in the ocean in exchange for new ones. I can only image how difficult it must have been for them to reintroduce themselves.

Now, more than ever, I struggle with my own identity because these narratives -- that of my community, friends, family, and ancestors -- are tangled into mine; like my hair, these intersecting narratives will unapologetically resist against, and shatter, anything that tries to neatly partition it. It demands that it be understood and loved as a complex and intertwined entity -- that it is enough.

At Cornell, people do not look like my vecinos. Whereas I would have been praised for touching the hot paella and learning that it burns, failure doesn't work in the same way within institutions of higher education. Failure haunts me; because my education is a gamble, I could lose it all if I were to let my untreated anxiety and depression -- my mental illnesses political in and of itself as it intersects with my latinidad, multiraciality of white/afro/indigenous, poverty, atheism, and womynhood -- keep me tethered to my bed during mornings when the world feels far too heavy for my face to carry. My financial security is contingent upon a certain grade -- I am reduced to digits.

There are days when I can do more than just wake up. There are days when I don't give a fuck and I let the hood flow out of me within oppressive academic spaces; I disrupt respectability and what it means to be "educated". I can be academic, hood, and feminista all at once. Just as I expect for the ways in which I have, and continue to, educate myself to be honored as valid within academic spaces, I also expect that this world may honor the experiences and physical presences of my father and aunt who have educated me.

The village of people who raised me have never made me more proud of being Dominican -- especially as I decolonize my identity and reclaim my afro/indigenous narratives -- than I am now. I love that every morning when I have to walk up the slope in front of my dorm, I can put on some Gilberto Santa Rosa and salsa my way up the godforsaken climb just as I did back in Harlem during my hour long commute to high school. I love that my hair is political and that it has a mind of its own, just like mi angel de la guardia of a mother and my father. I love that luchando is a habit -- because I've witnessed it being done over, and over, and over again from my own community. Indeed, it does take a village to raise a child. More than that, I love who I am. I love myself, and that is a revolutionary act in and of itself. Everyday I see myself growing (perhaps, not vertically), along with everyone else around me back home. This is the place that my father had us reach for and there are entire stratospheres that I have yet to see for myself. I only regret that I cannot bring him and my aunt along with me sometimes so that they may witness for themselves the fruit of their labor here at Cornell. The world has grown three times its size and it feels heavier than ever before -- I hope it doesn't stop. Despite the tremendous weight I carry now, I could not imagine a greater honor. I will proudly carry my pueblo along with me.

Because of everything that I am, the whispered prayers and narratives of the Dominican Diáspora in the South Bronx, este "Nuevo Mundo" es mio para reclamar: this "New World" is mine to reclaim.