This Mother's Day, naturally, I think about the gifts my mother has given me over the years. My mother, Maria Teresa, had five children (in order): my sister Mireya, me, Nora, Monica, and my brother Erick. I look back now and can't imagine what a struggle it must have been for her. She and my father both worked, but even so, we lived in very poor circumstances. We didn't have much money. My brother and sisters and I slept in the same bed, and I don't know how my parents were able to put food on the table and still take such good care of us.

My mother worked as a seamstress. She would do sewing work and would design and sew costumes for Carnaval in Mazatlán. It was tiring work but she still managed to make the time to show us kids how important we were to her. It could not have been easy. My brother Erick remembers sitting by her side as she sewed for hours and she would give him empty spools from the thread she was using, so he could make racecars and play while she worked. 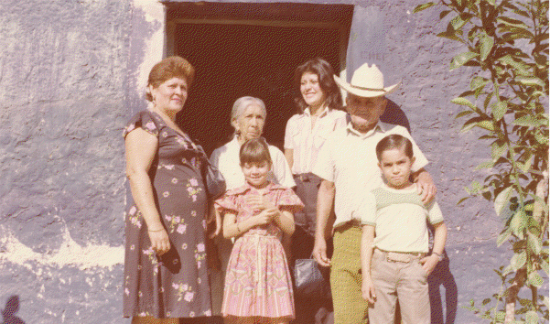 Now living in Los Angeles, and seeing these "real housewives" shows on TV, it really shows what a different life we had. My mom didn't go to the mall. She didn't come home with shopping bags full of new shoes. She didn't go to the spa. She didn't have a trainer or an assistant. If she had any extra money or any extra time, it went to us. I don't remember her buying anything for herself. Or taking time for herself. Everything she had she gave to us.

And as a kid, I wasn't easy. My brother Erick can tell you about my martial-arts phase when I was studying judo and worshiping Bruce Lee and using my brothers and sisters as punching bags for practice. I'm sure having dogs follow me around all the time wasn't easy either. Once, she gave me money to take Erick to the barbershop to get him a haircut. Instead I practiced my early dog-grooming techniques and groomed him myself. He had to wear a hat for weeks and my mom was furious.

But my mom never gave up on me. When I told her I wanted to be the best dog trainer in the world, she believed in me and thought I could do it. There was no way a short kid from Mexico was going to become anything. And there are a lot of kids all over the world who don't become anything, because their parents don't believe they can, even if they could. My parents believed. You can't imagine the power of that gift, and it doesn't cost a nickel.

Not long ago, my mom and my sister Monica came and prepared some food for my office pack. They made Tacos Dorados de papa y de res -- tacos with potatoes and meat. Very simple food. And I know everyone says it, but it's true -- the secret ingredient is love. We never had sushi and Kobe beef growing up, but my mom's hot dogs and pancakes with syrup and marmalade will taste as good to me as anything that any famous chef can create. She devoted her life to caring for us, nurturing us.

I think my mom was the original pack leader. She kept these five kids fed and loved, and now that we're gone, I think it's funny that she has five dogs. Two Chihuahuas, a dachshund, a poodle, and a Yorkie. I guess five's the magic number for her pack. My brother and sisters and I can argue about which dog replaced who.

In Mexico, Thursday, May 10, was Mother's Day. I called up my mother and my grandmother and sang to them over the phone. It was spectacular. I'm not sure my grandmother who wears a hearing aid could appreciate the full performance, but she knows I called.

This Mother's Day, I hope everyone who is lucky enough to still have their mother with them takes some time to tell her how much she's meant to you. And if your mother has passed on, take this day to reflect on the gifts she gave you and what you can do to make yourself the person she believed in. Happy Mother's Day to all the moms.