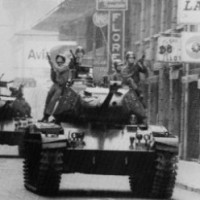 In the early '70s, Chile was in a state of political unrest -- its socialist president Salvador Allende and largely conservative congress were at odds, and by June 1973, the Chilean Armed Forces were plotting against the Allende government. On June 29, Lt. Col. Roberto Souper led a failed coup attempt now known as El Tanquetazo. General Carlos Prats, a frequent member of Allende's cabinet and commander-in-chief of the Army, responded to the coup attempt.

This account was compiled from an interview by ADST with Samuel Hart in 1992, who was stationed in Santiago during these years of unrest. You can read the entire account on ADST.org as well as Hart's account of the successful coup against Allende.

Q: The military in Chile, unlike most places in Latin America, was not an activist military.

HART: That's right. They had prided themselves on being a professional military. What happened in Chile in the overthrow of Allende was not the product of carefully thought-out and orchestrated U.S. policy. It was a product entirely of internal Chilean struggles and contradictions.

Allende was able to hold on to power as long as he did as a direct result of a bungled kidnapping attempt. There was a right-wing group in Chile called Patria y Libertad, with whom the Agency [CIA] had contacts, with whom the Agency had discussed possible actions to prevent Allende from taking power. But in the final analysis the Agency had decided not to participate in this attempted kidnapping. I think it was in December 1970 that this group went ahead, bungled it, and the commander of the Chilean Army, Rene Schneider, was killed in the bungled attempt. He was succeeded as head of the Chilean Army by a guy named Arturo Prats....

Arturo Prats, as long as he was head of the Army, because of his viewpoint about the role of the Army, protected Allende. Arturo Prats was a man of great strength and personal courage. I don't know what his real political views were, but he saw his role... as a guardian of the constitution, in a way. He felt that the enemies of Allende were trying to press a confrontation to the point where the constitutional fabric would be broken.

Pressures started to build: there was economic pressure; there was political pressure. There was economic pressure because the country consumed enormous amounts of assets in a binge of consumption in the first year and a half of Allende's regime. This was a conscious attempt by Allende to try to buy a majority vote in the upcoming elections so he could perhaps get the constitution amended, in a plebiscite, as to how the country would be governed. He came probably within one percentage point of getting that majority, when he ran out of assets. And then the economy started to free fall.

There was political pressure because the Supreme Court and the Parliament resisted some of Allende's actions. So he was more and more reduced to finding gimmicks and executive decrees and what have you to nationalize industries, to take over businesses, to close down access of opposition newspapers to newsprint, to put economic pressure on other political opponents, etc. 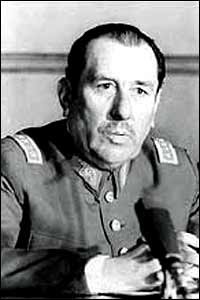 Finally (and this is really the most important thing), because the MIR and other militant groups in his own coalition, distrusted the military, they created an arms supply and a paramilitary group outside the military. This was supposed to be the vanguard of the working class should the confrontation come. And this involved importing enormous amounts of arms and munitions into the country outside of military channels....

The military started getting more and more restive, particularly the Navy and the Air Force, which had different commanders from Prats, who was the Army commander. Carlos Altamirano went down to Valparaíso, the home naval base of the Chilean Navy, in August of 1973, and made a speech to the non-commissioned officers and the below-the-decks types, saying, "Look, the Chilean Navy is anti-Allende, and there may be a military move against Allende. If there is, you should not obey your officers." This was probably the final straw...

As conditions got more and more tense, as the military became more and more restive, every night in front of General Prats's house, the wives of the field-grade Chilean Army officers would go up and down in front of his house, banging spoons on pots and pans, making a terrible noise and calling Arturo Prats dirty names for betraying his class and his institution-for betraying the middle class.

It got to the point where, one morning in June of 1973, a lieutenant colonel, the commander of a tank battalion, cranked up his tanks, chugged out with 15 tanks or so in a tank column, went down to the Moneda [the presidential palace], pointed the guns at it, and said, "This is a coup. Surrender!" Everybody kind of stood around wondering what was going to happen next.

The lieutenant colonel thought he had the armed forces behind him, but when he looked, nobody was there. He sat around there, with everybody kind of looking at each other, for about three or four hours. Then he got back in the tanks and headed for his barracks. But he ran out of gas, so he pulled in an Esso station and said, "Fill it up." He had to fill up the tanks to get them back into the barracks. This was the abortive coup of June 1973. 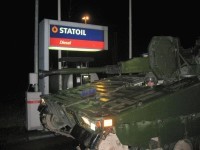 Then the Chilean military said, 'You know, what are we going to do with this guy?' General Prats was still the head of the Army, and he had come down and helped face down this lieutenant colonel, and behaved very heroically, I think, on that June day. Prats was the hero of the moment for those who supported Allende, because he had faced down this tank battalion.

But Prats's nerves were getting very raw. [Just two days before, on June 27] he was in the back seat of his official car, being driven from his house, out near where I lived, into town, along the main thoroughfare. He and his driver stopped at a stoplight. Alongside them at the stoplight, out in one of the nicer sections of town, was a Chilean lady of a certain age [Alejandrina Cox], who looked over and saw it was Prats, and shot him the finger.... Prats snapped. He got out of the car, he unlimbered his sidearm, and he shot her Citroën about six times. He emptied his service revolver into her car (not her) in full view of hundreds of commuting Chileans.

From that moment, Prats was dead meat. He could not survive. He could survive all kinds of political things; whether it was right for the Army to take these positions to fill ministries that were not defense. Because, to deflect political pressure, Allende was putting generals and colonels in to run these various government agencies, and a lot of people thought that was a terrible thing. Prats went along with it. He could get away with that. 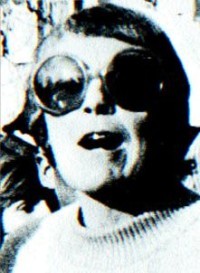 But he could not get away with violating the code of ethics of a Chilean Army officer, and shooting that lady's Citroën meant that Prats was through. He was removed by a conclave of generals as chief of the Chilean Army within a matter of a few days after that. It took just a few days and he was out of there.

Succeeding him as commander of the Chilean Army was a gentleman by the name of Augusto Pinochet....