In June 2014, comic artist Elana Pritchard was arrested for violating a court order. For two months, she served time for her violation in the women’s division of the Los Angeles County jail system, first at Century Regional Detention Facility and then at the Twin Towers Correctional Facility. As an artist, she was equipped with nothing more than a golf pencil.

Inspired by her mentor, animator-director Ralph Bakshi, Pritchard resolved to put that pencil to good use, documenting her stay in the women's jail in all its dark detail through a series of comics. Pritchard's images are disturbing, to say the least, offering an uncensored view of a world that normally remains cloaked in mystery. She chronicles filthy cells strewn with toilet paper and moldy bread and male prisoners pressuring her to expose her breasts. A particularly grim comic depicts an apathetic guard denying Pritchard a shower after four days unbathed, claiming most prisoners go a week before showering. 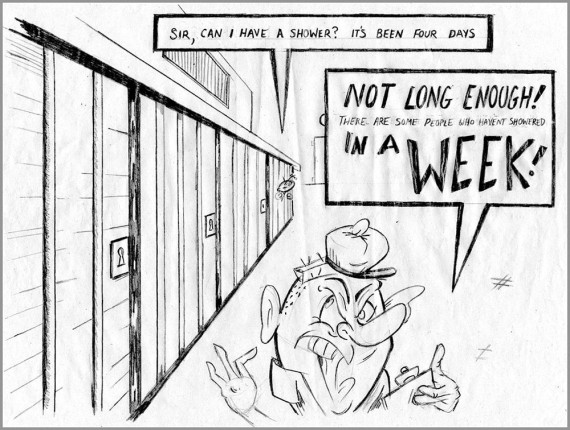 Pritchard's works were published in LA Weekly, along with written accounts describing the events illustrated. Again, the accounts spare no specifics, elaborating the daily realities of jail inmates, including the squat-and-cough, enacted every time one enters the facility.

"The dreaded squat-and-cough: You have to do it every time you enter the jail. In a room with about 40 other people, you strip naked, lift up your breasts, open your vagina, squat down and cough on command. If nothing falls out, you get up and put on your jail uniform as fast as you can. After the ordeal, they give each person an orange juice and a microwaved burrito. It’s the closest thing you get to compassion in jail." 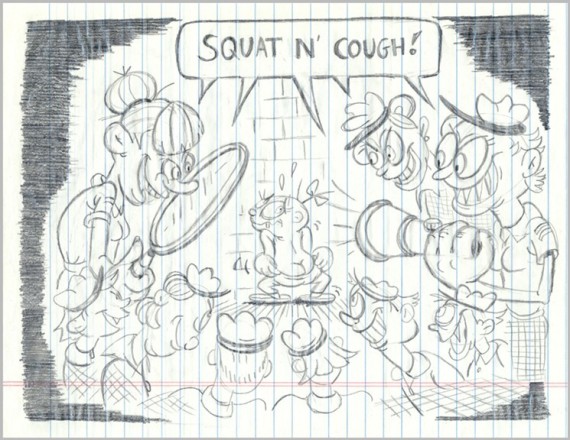 After Pritchard published her images, she was overwhelmed by the positive reaction to her work, receiving responses and support from strangers all around the world in regard to the inhumane practices of the facility. "I have been in communication with the LA County Sheriff's department," Pritchard wrote to The Huffington Post in an email, "and they have told me that due to these comics they have issued a new policy that all inmates must be given showers within 24 hours of entering the jail. We are scheduled to meet next week to discuss further improvements."

"And throughout all of this it seems the original, humble message of these comics is sticking: that we were people. Even though we had a barcode on our wrist with a number and were called 'bodies' by the staff, we were still people." 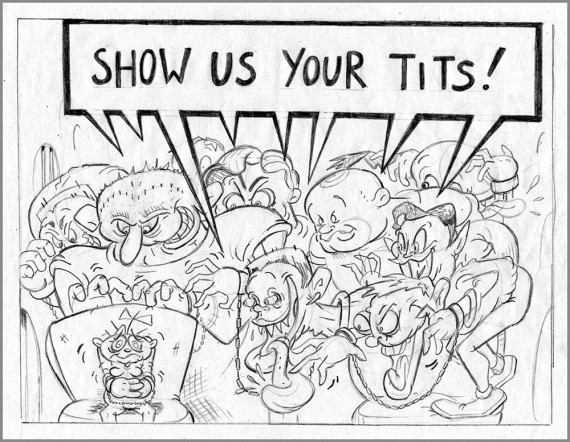 Pritchard's images combine humor and dismay, yielding an honest portrait and scathing critique of the incarceration system and the people who find themselves stuck in it. "Many people in jail are still on trial and haven't even been found guilty or innocent yet," she expressed. "Many people made mistakes that you or I have made before in private, only they got caught. There were mothers in there that missed their children. There were kind people in there that cared about the arts and cared about each other. I drew these comics to make us all laugh and remind us that even though there was a whole group of people with badges and better clothes than we had telling us we didn't matter... we did matter and we were people."

Read about Pritchard's time in jail in greater detail over at LA Weekly.

Elana Pritchard is a cartoonist and animator in Los Angeles. She is currently doing a Kickstarter to finish an animated cartoon and recently worked on Ralph Bakshi's upcoming film "Last Days of Coney Island" (to be released in the summer of 2015). Follow her on Twitter.