The population of aging and elderly prisoners in U.S. prisons exploded over the past three decades, with nearly 125,000 inmates aged 55 or older now behind bars, according to a report published Wednesday by the American Civil Liberties Union. This represents an increase of over 1,300 percent since the early 1980s.

More than $16 billion is spent annually by states and the federal government to incarcerate elderly prisoners, despite ample evidence that most prisoners over age 50 pose little or no threat to public safety, the report said. Due largely to higher health care costs, prisoners aged 50 and older cost around $68,000 a year to incarcerate, compared to $34,000 per year for the average prisoner.

Unless dramatic changes are made to sentencing and parole policies, the number of older prisoners could soar as high as 400,000 by 2030, posing a tremendous threat to state and federal budgets, said Inimai Chettiar, a co-author of the report.

"If we continue spending on prisons the way that we are, particularly on this aging population that's low risk, we're going to get to a place where states can't afford to spend on anything else," Chettiar said.

And while elderly inmates released from prison will require medical care and other public services, a fiscal analysis by the ACLU found that states would save an average of more than $66,000 per year for each elderly prisoner they release.

"Simply put, it is an unwise use of taxpayer dollars to spend enormous amounts of money locking up elderly prisoners who no longer need to be behind bars," said William Bunting, an ACLU economist and co-author of the report.

The population of elderly prisoners is not booming due to a geriatric crime wave. In fact, statistics show there are fewer old people committing crimes than before, Chettiar said.

Rather, the report found that the graying of the nation's prisons is largely the result of harsh sentencing laws enacted during the 1980s and 1990s, creating a vast pool of prisoners serving extraordinarily long sentences, often for non-violent crimes or drug offenses. Many states created statutes that triggered long sentences -- including life in prison -- for repeat offenders, even for those convicted of a series of relatively minor crimes.

Harsh anti-drug statutes and 'truth-in-sentencing' laws -- which dictate that inmates serve the majority of their sentences before being paroled -- also led to a sharp increase in the number of inmates growing old in prison.

As prisons increasingly resemble nursing homes, some states are considering more cost-effective alternatives. In 2011, the Louisiana legislature passed a law making it easier for inmates over the age of 60 to obtain parole hearings. The law only applies to non-violent offenders. Louisiana's prisons suffer from some of the worst overcrowding in the nation.

Marjorie Esman, executive director of the ACLU of Louisiana, applauded the move. "Louisiana should not be using taxpayer dollars to lock up elderly individuals when they pose no danger to our communities," Esman said in a statement at the time.

Statistics show that the likelihood of a prisoner committing a new crime post-release drops sharply in old age. However, many older inmates do end up back behind bars for parole violations. 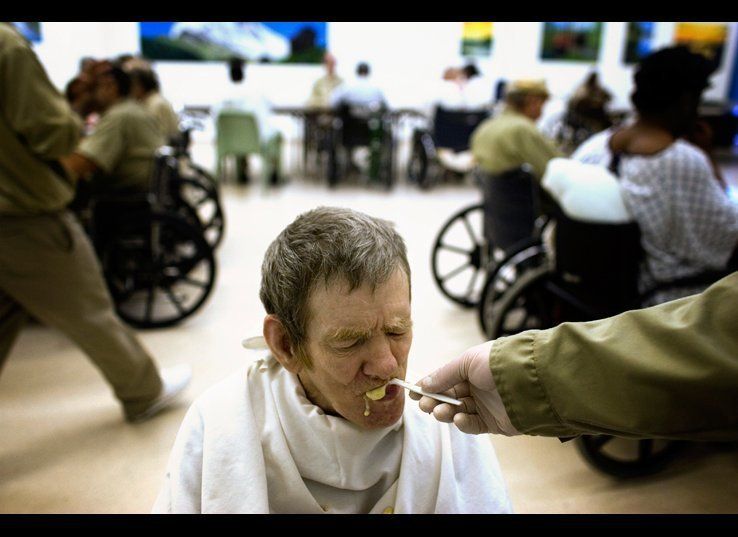 1 / 9
Charlie Coffey, 65, is fed his lunch. He has been in prison for over 30 years. <br><br> <em>All photos taken at the Nursing and Hospice Care Unit at the Kentucky State Reformatory</em>
Tim Gruber/ACLU