Elderly pit bulls have a couple of strikes against them when it comes to finding adoptive homes.

But Brenda and Phil Johnson are among those people who see gems in these often overlooked animals. And how the Springfield, Virginia, couple wound up with 13-year-old Diamond is the kind of tale of kismet and kindness that might have you believing in destiny.

When Diamond wound up at Northern Virginia's Lost Dog and Cat Rescue Foundation in need of a new home, volunteer Barbara Hutcherson thought of the Johnsons immediately.

"They are these wonderful people who have adopted three older pit bull type dogs," says Hutcherson. "The first one ... died of liver failure just months later. And instead of being crushed, they came back and adopted a pair of older dogs who still live with them. They are just so kind and patient and willing to accept the dogs who need them in whatever state they arrive."

Last Saturday, fellow Lost Dog volunteer Judith Danewitz also thought of the Johnsons, and sent Hutcherson a text. The women agreed to revisit the idea later, after Danewitz took Diamond to an adoption fair at a local Petsmart that day.

"I told her that would be perfect, and I would look for [the Johnsons'] contact info that night," says Hutcherson.

Maybe it was fate. Or maybe it's that someone who's worked a long time in animal rescue has intuition about which homeless pets would be good with which humans.

That very afternoon, Brenda Johnson happened upon Diamond at the adoption fair. She had been looking casually for another dog to adopt since losing one she'd taken in at 12 years old. Johnson's eye was on a geezer of a terrier she'd seen online, but she was having a hard time connecting with his foster parents to arrange a visit.

It was too bad for the terrier -- but happy for everyone else, because Johnson spotted Diamond, who was much too thin, "very, very tired and confused, but hanging in there with good manners" while "wearing a very silly pink coat decorated with red hearts," she says.

And that was more or less that for Johnson's heart.

"I am a sucker for old, used-up dogs who have fallen on hard times. So is Phil, my husband. They are expensive, and they are not with you as long as a puppy you might adopt, but they bring their history and wisdom to your home," says Johnson. "I could see that Diamond needed a soft place to land."

The adoption was basically over and done before anyone even realized that this lucky old pup had just gone home with the very people with whom Lost Dog volunteers had been hoping to place her.

Once they did figure it out, up went one of the most touching Facebook posts in the history of animal rescue:

Diamond's name is now Daisy. At her new home, she has lots of beds, a wee crew of fellow oldies to pal around with and a wide selection of bones to chew on -- though she seems occasionally frustrated that the others don't seem to care when she parades a choice chew toy around in front of them.

She's also found some food she likes, and has started putting on weight. That's especially moving since the dog was originally available for adoption because of a cruelty investigation and seizure relating to the pervious owners not keeping her healthy and at the appropriate weight, Johnson's learned.

"In a month you won't recognize her," says Johnson, adding that "it was strange that Barbara and Judith had mentioned me before I got there. I can't think of a better, more peaceful home for this senior girl than mine."

"This is really near the top of my list of favorite personal rescue stories," says Hutcherson, who seems surprised by her own reaction.

"I am the girl who gags when someone says things like 'It was fate,' or 'It was meant to be.' I always turn my nose up at these notions," she says. "But what else is one to believe about this? It has my belief system out of balance, that's for sure. But in a good way, a really good way." 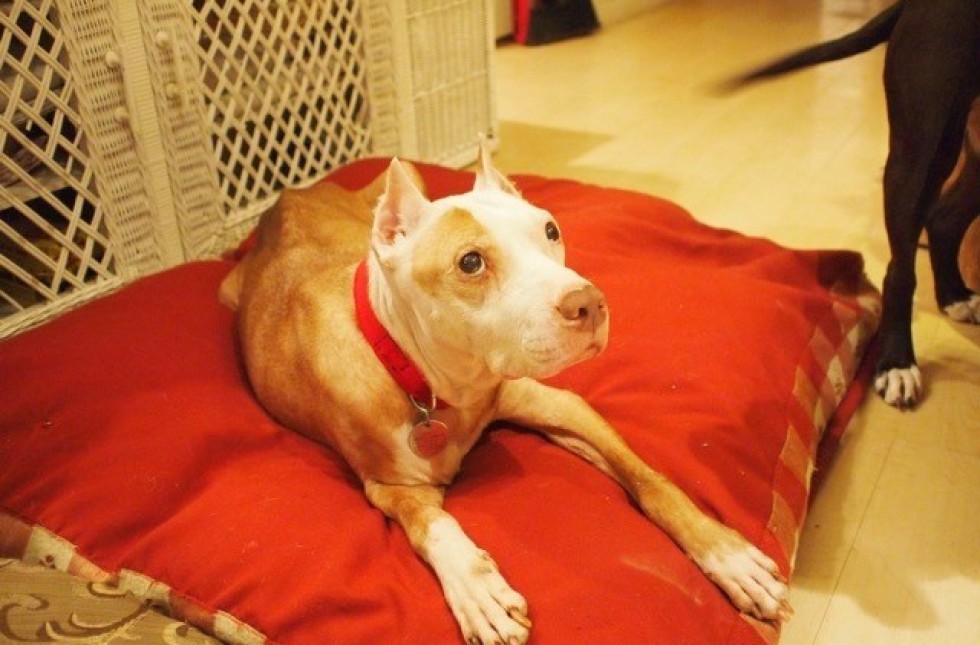 Diamond, now Daisy, luxuriates on one of her many comfy beds at her new home. Photo credit: Brenda Johnson

Overlooked Elderly Pets Need Love Too, And This Pit Bull Is Proof
These Pets Are Looking For Homes!