"The Great Depression of 1929 struck the United States like a biblical plague, shuttering factories, closing banks, foreclosing on farms, and putting as many as one out of three workers on the street. Unemployment jumped from fewer than 500,000 workers to more than four million between October and December 1929, and millions more could find only part-time work. Almost everyone felt insecure. Those who had jobs feared losing them; those without work worried about what would become of their families." (Source: Who Built America? (Volume Two) by Roy Rosenzweig et al.

When Franklin D. Roosevelt took office in March of 1933, he responded to those fears, declaring: "The nation calls for action and action now." And then he took action -- plenty of it -- with the National Industrial Recovery Act, comprised of a wide array of programs.

During the first three years of the Great Depression, strikes were virtually nonexistent as union membership dropped to less than 10% of the national workforce. The United Mine Workers in particular suffered, as miners continued to work 12 to 14 hours a day for very low pay in chronically unsafe and unhealthy conditions while living in company-owned housing and towns. The problems were particularly acute and cruel in Ohio, Pennsylvania and West Virginia. But with the inauguration of the new president, workers everywhere dramatically began to embrace collective action, and by June 17, 1933, the day after Roosevelt signed the NIRA, 80% of Ohio miners had signed union cards.

In early May 1935, however, the Supreme Court threw the labor side of the economic recovery back into complete disarray when it struck down the NIRA. Not long after, Eleanor Roosevelt, a consistent advocate for workers and workers' rights, on May 21, 1935, shocked the nation -- and the editors of the nations' newspapers -- by touring a coal mine. 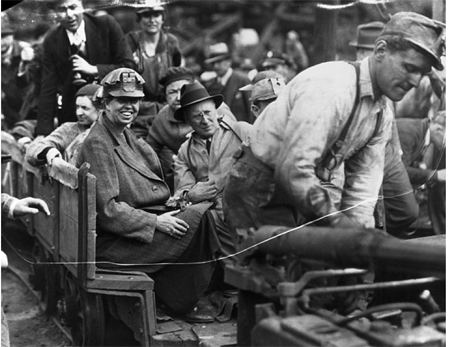 According to the New York Times, Mrs. Roosevelt "smiling with eagerness as she reached the mine shaft" declined the new pair of overalls provided for her, donned a grey coat and a miner's hard hat, and headed two miles into the mine. For over an hour and a half she discussed wages and working conditions, safety precautions and mining methods with the four hundred miners, black with coal dust, working in the two-mile stretch. (Many believe she was the first woman ever to go underground in Appalachia, defying both an age-old superstition that it brought bad luck for a woman to go into a coal mine and the equally long-held bias against women in the workplace.)

It is important to this story to also know that back on June 3, 1933, just three months after FDR's inauguration, a New Yorker magazine cartoon, with an especially cruel caricature of Mrs. Roosevelt, ridiculed the idea that she might ever dare go into a coal mine. Well now she had gone into one, forthrightly, courageously and with great sensitivity for the workers she met.

A short while later, in a piece she entitled "In Defense of Curiosity," Mrs. Roosevelt responded to the cartoon and to those who had said "there certainly was something the matter with a woman who wanted to see so much and to know so much." In her article, now cited as one of the earliest and most effective arguments on behalf of the rights of women in the modern era, she wrote:

Somehow or other, most of the people who spoke to me, or wrote to me about it, seemed to feel that it was unbecoming in a woman to have a variety of interests. Perhaps that arose from the old inherent theory that woman's interests must lie only in her home. This is a kind of blindness which seems to make people feel that interest in the home stops within the four walls of the house in which you live. Few seem capable of realizing that the real reason that home is important is that it is so closely tied, by a million strings, to the rest of the world. It is man's ceaseless urge to know more and to do more which makes the world move, and so, when people say woman's place is in the home, I say that caring will take her far and wide.

Now, bearing in mind Franklin and Eleanor Roosevelt's abiding commitment to workers, economic justice and a vibrant middle class that grows from the bottom up, contrast President Obama's seeming inattention today to fixing real unemployment and improving workers' rights with Candidate Obama's speech on July 2, 2008, to the United Steelworkers in which he said, "The reason I'm running for President is because I don't want to wake up one day many years from now and see that we're still standing idly by while even more plants are shut down, and even more jobs are shipped abroad, and even more workers are denied the good benefits and decent wages they deserve."

The Roosevelts' words and Candidate Obama's words are certainly from the same hymnal, but not yet their respective actions. The current Recession so mirrors the Great Depression of 1929 that the opening quote of this piece, if written today, would just as soberingly read: The Great Recession of 2007 struck the United States like a biblical plague, shuttering factories, closing banks, and putting as many as one out of ten workers on the street. Unemployment jumped from 7.7 million workers to 14.9 million between December 2007 and February 2010, and 14.9 million more can find only part-time work, have become 'marginally attached', or have left the workforce because they are discouraged. And it is wrong for President Obama now to be breaking or delaying so many of the promises to America's workers that were the hallmarks of his 2008 Campaign.

As U.S. Representative Tom Perriello, a Virginia Democrat, says, "The elites in the media and the Senate are already out of the depression," but the nearly 30 million real unemployed workers in America are far from out of it. (Incidentally, Congressman, there are more than a few "elites" in the House as well.)

The line then-Senator Obama voiced that so helped define Candidate Obama for me came when he said: "Change is a President who welcomes [American workers] into the White House and who will finally make the Employee Free Choice Act the law of the land." The 2008 campaign was for me all about issues, and in those few words Candidate Obama spoke to workers' issues with an eloquence reminiscent of the Roosevelts.

Yet fast forwarding all of about 21 months, we hear today on background from a senior administration official that David Axelrod, the president's top political adviser, "will tell us they won because of character, not issues," and that this view is now the "touchstone for how they [the administration] think about the world."

Well, John McCain has a ton of character -- certainly more than enough to be president -- and I know firsthand that in Pennsylvania, Michigan, Indiana and Ohio, he did not lose 'because of character.' He lost because workers there and elsewhere, in the midst of a really crappy economy and unparalleled income inequality, much preferred Candidate Obama's issues.

And, with fully 13 million more real unemployed workers just since Inauguration Day (not the '8-million-since-the-Recession-began' figure that the administration uses) and with the percentage of unionized workers in the private sector at 8%, lower than any point in the 20th century, six of those issues, those promises, are even more resonant today. Candidate Obama demanded:

Now it's time - past time in fact - for President Obama to follow through, as none of these six has come to pass.

Going back to Candidate Obama's line about "Change" being about 'welcoming' workers, Eleanor Roosevelt certainly welcomed them -- and when they couldn't come to her, she even went two miles underground to meet with them. And her husband, after the court struck down the NIRA, used every bit of his energy and political skill to enact the National Labor Relations Act, which guaranteed workers the right to freely organize their own unions, strike their employers and banned "unfair labor practices."

I had the privilege of helping write that 2008 speech in which Candidate Obama told the United Steelworkers and the nation the many things that "Change Is," and while I believe he would give the same speech today -- and might well even do his own coal mine tour -- I now question whether we will ever see any meaningful follow-through.

The point -- and the problem -- is the sharp contrast between "the Roosevelts' words and actions" and "Candidate Obama's promises." President Obama needs to feel in his core what Eleanor Roosevelt felt touring that coal mine in Ohio, and remember how to talk with angry working-class people. And when he does, his own promises will turn into actions and the nation will again believe that he and his administration deeply care about and will diligently work to alleviate the plight of America's workers and the middle class.

Leo Hindery, Jr. is Chairman of the Economic Growth/Smart Globalization Initiative at the New America Foundation and a member of the Council on Foreign Relations. Currently an investor in media companies, he is the former CEO of Tele-Communications, Inc. (TCI), Liberty Media and their successor AT&T Broadband. He also serves on the Board of the Huffington Post Investigative Fund.

Co-chair of the Task Force on Jobs Creation