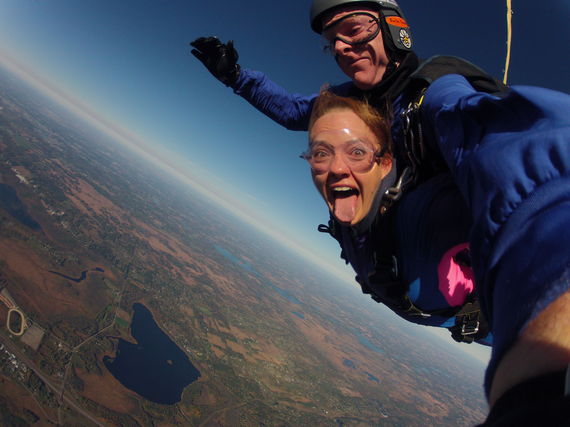 Molly Mogren has pretty much done it all.

She has hiked the Antarctic Peninsula, outrun a hyena in South Africa, and powered through Iowa in a monster truck.

And don't get her started on hunting an animal. In the deep South. With her bare hands.

The Minneapolis-resident was formerly Andrew Zimmern's right-hand-woman, and co-host of the popular podcast Go Fork Yourself. These days she's is a fulltime writer.

Her website, the irreverent, hilarious Hey Eleanor!, is where she goes to blog about all those forays outside her comfort zone.

I spoke to Mogren recently about how she got her start, why it's important to live with a sense of adventure, and that one time she accidentally gave a TED talk.

I was just watching your TED talk.

You want to hear a funny story about that?

I didn't know I was giving a TED talk.

A friend of mine was doing an event, where she had people coming together, to talk about fear, and she asked me if I wanted to say something, too.

She said: "It's kind of like TED, where people talk about cool ideas and maybe have a PowerPoint."

Then I got there and realized: "Oh. It's not kind of like TED. It IS TED."

There were all these people there, professional speakers! And I had no idea. Not a clue.

You have the most incredible stories, Molly. I'm obsessed with your website.

Thank you. I should say that my life's fun, but I do a lot of really normal things. I just bring an adventurous attitude with me. But I wasn't always that way. Not at all.

Right. You talk about being a 'Fraidy Cat.' I think that's why I'm so drawn to your stories. I feel like there's hope for me, as someone who's scared of a lot of stuff.

What's funny is that initially, I thought no one would give a rip unless I was doing these crazy things.

At the very beginning of my blog, in the first month, I went to the deep South, on my first hunting trip, where I killed an animal with my bare hands. A couple of weeks later, I went skydiving.

But to this day, the posts people have engaged with the most are: the one where I talk about how I took the bus home when I would normally just drive. And the time I went to the library for the first time in ten years, and I had a weird experience.

That's the thing. Nobody cares about the big, epic stuff. We all have these little hurdles in our everyday lives. That's what people really identify with.

Maybe it's those tiny fears that cripple us the most. Fascinating. Tell us how you came to call the site Hey Eleanor. It's named after Eleanor Roosevelt, right?

Right. It started off with her quote: "Do one thing every day that scares you."

I had spent eight years with Andrew Zimmern, doing food and travel writing mostly, and I really loved it. But I was writing for his brand. I felt like I wanted to write more of myself.

Around this time, I read that quote and thought: "You know, I'm kind of a wimp. I feel like if I did one thing that scared me every day for a year, that would give me lots to write about."

I had ideas for blogs before, but that's the first one that stuck.

In the past two years, I've really dug into Eleanor Roosevelt's story. She's one of the coolest people who has ever lived. For twenty-some years, she had a syndicated column that was published across the country in forty newspapers or something.

How often did she write?

I've really grown to have quite an affinity for her.

So what are you and Eleanor building together?

There are a few different things going on, but I'd like to help people infuse adventure into their everyday lives.

I think people associate adventure with being twenty years old, without that many responsibilities, being able to travel through Europe on a shoestring; staying at hostels, and eating cheap food.

That sort of thing.

Then, as we get older, we have more responsibilities, and we get stuck in routines. We find ourselves at home more. Given that, in my experience, having an adventured life takes intentionality and practice.

And the way I learned that was by doing it every day.

What did you come away with, doing that?

That if you actively try new things every single day: even simple things, like having a different coffee order one day, or trying out that new restaurant that opened up down the street, life is just better.

I want to demystify some of those basic, small, hurdles that we all face every day, by showing a bit of vulnerability.

As in, saying: I don't know how this works either. I'm going to try it, and tell you about it. And maybe by me just cooking with an unfamiliar ingredient, and saying, 'Hey, it's just food. I don't know what I'm doing, but I'll give it a whirl,' I can empower people to try new things as well.

But I don't like to be just telling people to do things. I want us to be actively doing. That's why I did the Hey Eleanor Mystery Bus Ride last spring.

Twenty-four women signed up. We all met in one place. I planned three activities, and sent them a packing list. I didn't tell them where we were going.

I'm planning another one of those this fall, and hope to do more events like that, throughout the year, maybe even in different cities.

Here's a question: what's your definition of success?

That's something I've been thinking about a lot. I'd say: a life that's intentional, and designed by you; where you're excited to get out of bed in the morning.

My life is pretty simple. My definition of success is not a dollar amount. I've learned that we don't need a whole lot to be happy. I would rather create a life that's built around working hard, but working less, and having time to enjoy my friends and family and all that.

You know: all the good stuff.