Having fun yet? Is all the bickering "he said - she said" giving you headaches? Negative ads with spooky background music making you feel blue? Settle in. We haven't even finished the pre-season.

It has, however, been a particularly long training camp. Already, the presumptive nominees have made history in their record-high unfavorability ratings. Already, the list of advantages and disadvantages for Hillary Clinton and Donald Trump has been regurgitated to death by pundits on an hourly basis on national TV - and minute-to-minute online. "He's authentic and she's not." "She's experienced and he's not." "He has business scandals. She has government scandals." "He's an outsider and she's an insider." "She's highly knowledgeable and he doesn't know what he's talking about."

Because we saw a reality TV star crush 16 other experienced candidates in the GOP primary and we also saw a virtually unknown Independent Senator make a real play for the Democratic nomination, we keep saying that this election is like no other. But what if Clinton and Trump's high degrees of unlikability - which are currently comparable - don't move much between now and November 8th? What if after all of the mud wrestling, what's left of the swing voters in our country actually set aside the candidates' personalities? If that does happen, the stretch run of this campaign might just boil down to that incantation James Carville first made famous during President Clinton's victory in 1992: "It's the economy, stupid."

Americans want a better quality of life for themselves and their families. We all know that well-worn political cliché: Elections are about the future. But it is absolutely true. And right now our mood about the direction in which the country is heading is anything but propitious. It's terrible. A CBS/New York Times poll in April indicated that jobs and the economy comprise the top issue for voters - nearly three times as important as the next priority. And seven in 10 of us believe we're on the wrong track.

For millions of Americans, it doesn't matter how far we've come from the economic depths we were swimming in when President Obama took office. Statistics may well make the case that the president's policies and decisions saved the nation from a far worse fate, but that won't placate a huge number of voters. We are a "whaddya done for me lately" country. That may not be fair to the political party trying to retain the presidency, but this is the landscape nonetheless. Politics has never been fair.

So in the "Year of the Outsider," Donald Trump has been able to pummel all of his opponents thus far with his glib "business success" message. Don't worry - he'll fix it. He knows "more about the tax code than anyone in human history." He's "really rich." He's going to "be greedy for our country." Trump insists that we desperately need his brand of greed.

The facts haven't mattered much, because a great many Americans really want to believe. So many are still being left behind by an economy that is transforming in real time. People are angry, and ripe for the overtures of the "non-politician." Trump aggressively wheels around his political pummel horse with the ease of an Olympic gymnast. "Horrrrible trade deals!" "Murderers and rapists" - stealing jobs!" "I'll bring back manufacturing, believe me!" Trump is always on the offense, and because he has miraculously carved out a fact-free political zone for himself, the details don't matter. Not that Americans have traditionally had much patience for absorbing and considering the underpinnings of policy decisions and their ramifications. But this year, fairy tale proposals and policy elixirs are receiving even less scrutiny. The guy sounds confident, right? All of these other elected officeholders have disappointed us, right? For decades now, right? Of course the case is far from that simple. But in politics, perception is reality. And so plenty of people figure: Why not roll the dice on Dreamer Donald? Facts and logic are for losers.

Rust Belt states where changing economic realities have been particularly rough on blue-collar, working-class voters could make the difference in this election (and these are the voters who fueled his primary victory). If enough folks buy into Trump's simplistic yet catchy answers on how he'll revive the economy, he could have a chance to win in key battlegrounds such as Michigan, Ohio, Iowa, Pennsylvania and Wisconsin. He's a salesman, and it's a seller's market. Only say what they want to hear.

You won't hear Trump refer to the 2016 World Economic Reform report that estimates a net 5 million jobs will be eliminated by 2020 due to advances in technology. You won't hear Trump favor a raise in the federal minimum wage, even as we know that the recent job growth in our country has mainly taken place in lower-paying employment opportunities. You won't hear him talk about investing in community college or job training, and you certainly won't hear him cite anything approaching empirical evidence of how his "tax plan" will create jobs. 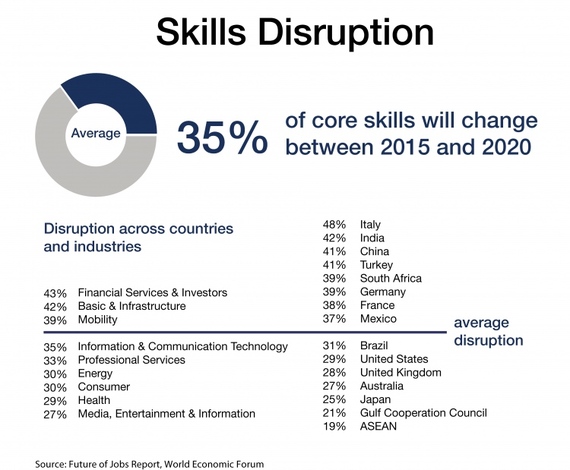 You also won't hear Trump talk about Congress very much. To be fair, lots of Americans don't focus on the fact that the "first branch" of government is critical for any president to pass legislation and move the country forward in big ways domestically. It's why most of Trump's silly promises are also empty. There will be no wall. There will be no religious ban. There will be no massive trade wars (this is the bright side for Trump opponents). United States presidents are not authoritarian dictators. It's one of the things that makes us the United States. But talking about the separated branches in our system and how change actually happens is not staying on offense. It's dull. It's rational. It's rooted in Constitutional principles. For Trump - and for millions of Americans - nuance equals nuisance. Keep it light, sell the sizzle, and nail the dismount. That's Trump's modus operandi.

On the other side of the mat, the facts matter more so. And for Hillary Clinton, that makes it tougher. It's true that being the Democrat, Clinton has the fast-changing demographics on her side, as well as the 18-state "blue wall" that her party has captured in the last six presidential elections. If Trump's unfavorable rating with Latino-Americans stays even near as stratospheric as it stands right now, this thing is over. But again, if the election comes down to jobs and the economy, we'll see a different story. And for Clinton, it's a balance beam routine that at times already looks like more like a high wire act.

Secretary Clinton needs to reassemble the Obama coalition, and it will likely help when the President takes his 53% approval rating out for a spin on the campaign trail. But while Clinton has to align herself with the successes of the President, at the same time she has to keep her eyes and message on all of those voters who are in the "wrong track" camp (including 51% of Democrats).

The condition of the American economy is always a mixed bag, which is why politicians from each party can try to spin it and frame it to their advantage. The U.S. official unemployment figure is hovering around 5% - down from 10% at the pinnacle of the recession. Fourteen million jobs have been created under President Obama's tenure. At the very same time, our labor participation rate is the worst it's been in nearly 40 years with just 63% of adult Americans working. Our long-term unemployment rate is also still unusually high.

Sleepy yet? This is Hillary Clinton's challenge. Even admired communicator Barack Obama had to call on President Clinton to be his "Secretary of Explaining Stuff" during the 2012 reelection campaign. And adding to that challenge, Hillary has to tout the gains of the last eight years, while firmly vowing to make the economy work for all of those swing state voters who haven't seen their real incomes rise - and that's if they're in the workforce. Finally, she has to ward off easy potshots from Trump assailing her as a feckless Washington insider like all the rest. You'll hear his "she's had her chance!" mantra. You'll hear it again and again after the conventions. And if the jobs numbers take a dip for a couple of months in a row? Watch out.

Again, it's not fair. It just is. The political landscape was ridiculously fertile this year for any populist performer to come along and call the system "rigged." And voters actually got one from each party in the primaries. But that doesn't mean that a smart, talented, strong and experienced woman like Hillary Clinton can't serve the country well and continue to make economic strides for Americans in the Oval Office. It just means that she has an incredibly uphill battle explaining how she'll do it - in a pithy, memorable way - and leaving voters with a feeling that it's true. And that it's enough.