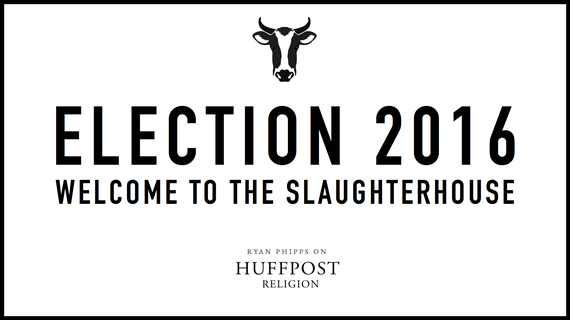 You are being programmed right now.

Every pixel, every sound byte, every limbic social media post - they're all intended to nudge you a little closer to the extreme end of one of the poles (or polls).

This current election season is by far the most polarizing of any that I've witnessed in my lifetime.

Though the candidates both stand for very definitive things (as they should) it's the human bullhorns sounding poll-tested-vitriol that are doing the damage, luring millions with the seductive bug lights of party rhetoric.

When did our republic become so shallow that we just started blindly following political parties?

In a nutshell, that's what we're being told to do during this election cycle, even if we're unaware of it.

We hear it daily:

"You may not like how candidate X stands on issue Y, but in the end, his/her party stands for Z, so just go along with the party on this one. Everything will be okay in long run."

Really? It will? How so?

Does the end always justify the means?

There's much more to this election than the stances of a political party.

Don't get me wrong, there are issues, and they matter- immigration, borders, foreign policy, a woman's right to choose, etc., but these aren't just issues for issue's sake. There are human lives attached to every one of these things.

Have we forgotten that we live in a country that was built on championing the wellbeing of individuals, not the ideology of a particular party?

When we are considering a candidate for presidential office, are we backing the candidate who envisions a country that works for everyone?

"We will not agree on every issue. But let us respect those differences and respect one another. Let us recognize that we do not serve an ideology or a political party; we serve the people."

I'm told that when trying to get any kind of livestock to behave like one wants, that it's much easier to employ threats to keep them in line (be it electrified fences, cattle prods, sheepdogs, communal cages, or shock collars).

It's alarming to me that this is exactly how I see the "party ranchers" of the current political climate getting the herds to behave like they want them to. They employ threats, pique fears, and we respond just like cattle. We funnel into the gates of the slaughterhouse, completely unaware of what lies ahead of us because we are so afraid of what is pushing us from behind.

America is better than that.

You are better than that.

You are more than a member of a political party. Black, white, gay, straight, transgendered, rich, poor, Muslim, Christian, Agnostic, Atheist, pick your label- you are an individual. You are a valued (and valid) member of the American family.

Are you voting for the candidate who cares about the entire family? Your neighbors? Your friends? The business owner down the street from your house? The church, mosque, or temple across town? The children that your kids hang out with? Their parents? Those living on the margins of society who don't have what you have because they weren't as lucky as you were?

Does your candidate have their good in mind?

Answer those questions honestly, and this foggy political landscape becomes much more easy to navigate.