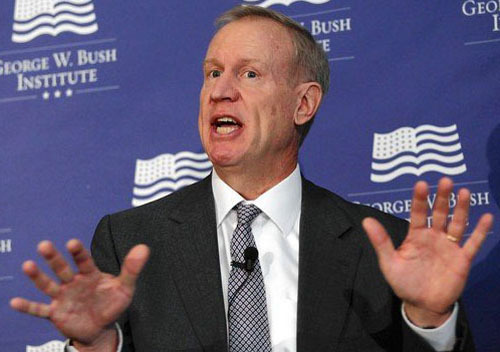 The State Board of Elections is set to review complaints against Chicago-based Liberty Principles PAC about whether it has been coordinating independent expenditures with candidates in violation of state campaign finance law.

Funded by Gov. Bruce Rauner and former Chicago Tribune chairman, Sam Zell, the group has produced political mailings disguised as newspapers to push its candidates for public office. The weekly "newspapers" have been flooding resident mailboxes across six suburban Illinois counties in the ramp up to the March 15th election.

Residents aren't happy. "I dump those newspapers in with the rest of the junk mail. Enough already," said a Lake Zurich woman, who asked not to be named.

The election board will hold a hearing Monday - a day before the primary election -to determine whether the PAC, headed by Cicero political operative Dan Proft, coordinated with candidates and if there will be public hearings on the matter. In one instance, the complaint alleges that one of committee's "newspapers" conducted a front-page interview with Reggie Phillips, a candidate for the 110th house district - a strong indication of coordination.

The Governor's office could not be reached for comment on the nature of the legal complaints or why he is funding the bogus newspapers.

So why are Gov. Rauner and Zell funding these fake newspapers? Now that Michael Ferro, a staunch Rauner ally, is the controlling shareholder in Chicago Tribune, why is it even necessary?

This is the question responsible media should be asking.

Proft has partnered with Brian Timpone, the former CEO of troubled local news service provider, Journatic, LLC, to produce the newspaper-like political mailings. The two men have a history together - both got their start as staffers for Lee Daniels, the embattled former speaker of the Illinois house. After working for Daniels, Proft became the spokesman for Larry Dominick, the scandal-ridden town president of Cicero, and Timpone focused on online data mining.

Timpone's participation in the shady project begs another question: Why is Zell involved in funding any of this? Didn't he learn his lesson with Timpone the first time around?

The answer is no.

In July 2012, Columbia Journalism Review ("CJR") published a story calling out Tribune for continuing its relationship with Journatic after the service was exposed in a segment on NPR's "This American Life" for plagiarizing, falsifying quotes, and using fake bylines in hundreds of outsourced "news" stories. Under fire, the Zell-run Chicago Tribune was forced to suspend its relationship with Timpone's Journatic then rehired the tainted company just six months later.

In addition to its deal with Chicago Tribune, Journatic also provided real estate content to Chicago Sun-Times, under Michael Ferro's leadership, before news of the scandal broke. Tim Knight, then CEO of Sun-Times Media, was also an investor in Journatic and helped expand its publishing contracts.

CJR summed up Brian Timpone's reputation this way: "Journatic is sinking deeper into a journalism ethics scandal that will leave its reputation in tatters."

But it won't prevent you from getting the big bucks from a wealthy governor and his pals if it serves their political interest.

This isn't the first time Illinois Policy institute has tried to pass itself off as a legitimate news entity.