From The Colorado Independent's John Tomasic.

Potential battles at polling places around the country, including here in Colorado, have been heating up for months. Voter protection volunteers– those mostly on the right looking to guard against fraud and those mostly on the left looking to guard against voter intimidation– have already reported they will be watching for polling place irregularities in counties across Colorado tomorrow. At very least, those volunteers and all registered voters in Colorado should know that voters do not need to show photo identification in order to cast their ballots in this state. Polling place staff can accept photo IDs but they must also, for example, accept as legitimate identification current utility bills, bank statements and paychecks.

The fact is, much of the confusion behind any coming polling place standoffs will be tied to questions about voter ID requirements. That’s the case partly because new voter ID laws have passed in states around the country this year and partly because those laws vary a great deal state to state and partly because the arguments around the laws are deeply politicized and partly because the training of poll-watching volunteers and polling-place election judges in every state of the Union is fairly rushed and unsupervised. None of these Americans are paid to do their polling-place work full-time. What’s more, it’s simply true that some of the watchers at the polls tomorrow will be looking for trouble where there probably is none.

HeadCount is a New York-based voter registration and election integrity organization that seeks to expand democratic participation through music and the music industry. It has produced a good online map listing voter ID requirements around the country. (Click on the image below to get to the map website.) 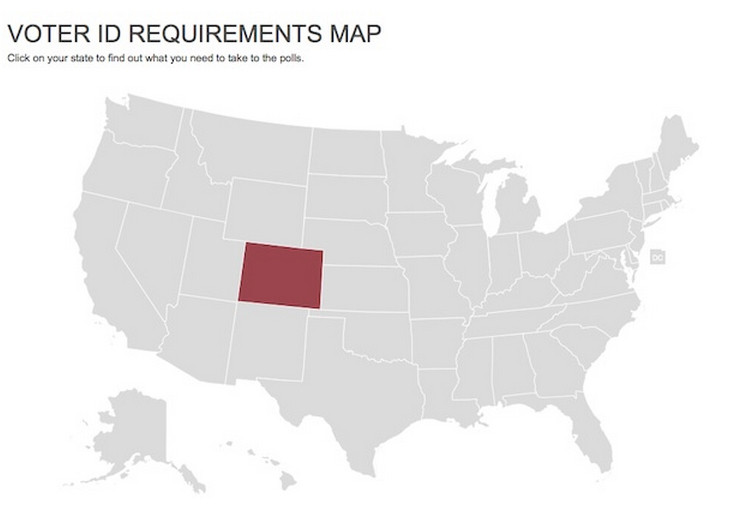 What forms of ID are acceptable?

If you do not have ID, you may cast a Provisional Ballot.

A similar map and information is available at the National Conference of State Legislatures website.

In Colorado, the right-leaning group Colorado Voter Protection will be out in force at polling places tomorrow, looking to prevent fraud. That group leaned heavily in its trainings on controversial Houston-based group True the Vote. Progressive voter protection groups like Common Cause have pointed out errors in the True the Vote training material used in Colorado that Common Cause believes might lead to voter intimidation and erroneous accusations about voter eligibility.

Common Cause has joined a coalition of similar left-leaning groups to update eight-year-old organization JustVote! The coalition provides voter information at its website and has trained 400 of what it is calling “voting heroes” to help voters navigate polling places and report potential voting problems across the state. JustVote! has set up two hotlines for Colorado residents, an English-language line at 866-OUR-VOTE (866-687-8683) and a Spanish-language line at 888-VE-Y-VOTA (888-839-8682).

In the United States, voter fraud– that is, fraud committed by individual voters– is statistically non-existent. A five-year Bush Justice Department effort to root out voter fraud found only 86 instances in a period where 300 million votes were cast. More than that, in-person voter impersonation fraud, the only kind of fraud voter ID laws work to prevent, constituted a fraction of any cases reported, much less prosecuted. It is election fraud that is the more serious problem, where campaign and government officials stuff ballot boxes or stow away votes or tamper with electronic voting machines.

If your right to vote is challenged, you can call a JustVote! hotline.

PHOTO GALLERY
7 Ways You Could Be Disenfranchised

1 / 7
Pennsylvania
You're an average voter in Pennsylvania. The night before Election Day, your wallet goes missing, leaving you without immediate access to any of the identification you'll need to vote at your local precinct the following morning. This would be a problem under <a href="http://www.ncsl.org/legislatures-elections/elections/voter-id.aspx#PA" target="_hplink">Pennsylvania's proposed photo ID law</a>, since <a href="https://www.huffpost.com/entry/pennsylvania-voter-id-ruling_n_1919187" target="_hplink">blocked by a state judge</a>. While many people in this situation may have backup forms of identification, <a href="https://www.huffpost.com/entry/pennsylvania-voter-id-law_n_1652469" target="_hplink">studies have shown</a> that a significant percentage of would-be voters don't. The state's safeguard against the immediate disenfranchisement of people in this situation would be a provisional ballot cast on the day of the election. But this doesn't mean your vote counts, yet. Anyone who casts a provisional ballot is required to "appear in person at the county board of elections" within six days of the vote to provide proof that their ballot was valid. If you're able to take time away from your job to do this, the process still requires a would-be voter to either show up with valid ID -- a replacement driver's license <a href="http://www.dmv.state.pa.us/fees/index.shtml" target="_hplink">would cost $36</a> and considerable time -- or to sign an affirmation that you are indigent and not able to afford the fees associated with acquiring a photo ID. Even if you make a rapid and somewhat expensive turnaround to get a replacement ID -- or alternatively swear under oath that you are too poor to pay for such a document -- there is no guarantee that your vote will end up counting. Many elections are largely decided before provisional voters have a chance to verify their validity, which could serve to discouraging them from following up with election officials or leave them effectively disenfranchised. In 2008, <a href="http://www.eac.gov/assets/1/Documents/2008 Election Administration and Voting Survey EAVS Report.pdf" target="_hplink">only 61.8 percent</a> of all provisional ballots cast were fully counted. If strict photo ID measures were implemented, however, the number of provisional ballots submitted would likely increase, as would the requirements for voters hoping to make them count. <em>(Photo: AP)</em>