WASHINGTON -- As attention turns from the Republican primaries to the general election for president, The Huffington Post debuts a new, interactive polling map that will anchor our Election Dashboard for the rest of the campaign.

The map shows where each state stands in the contest between President Barack Obama and former Gov. Mitt Romney, based on the latest polls (where public polling data are available) or on past vote results (where no polls have been conducted). Pro-Obama states are blue and pro-Romney states are red, with the colors darker or lighter to indicate whether a state is solidly for or simply leaning toward the candidate. Toss-up states, where the polling indicates a margin too close to call if the election were held today, are colored yellow. 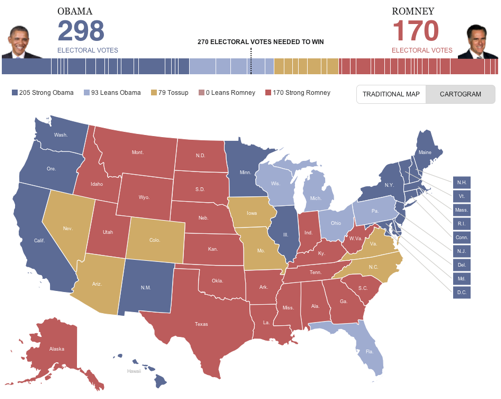 Clicking on an individual state will take you to a full-size, interactive polling chart for that state -- if at least five public polls of its voters have been released -- or to a listing of the available polls -- where we have collected one to four polls.

The map displays projected electoral vote counts for the two candidate, which will update as more polls are released.

The current electorate vote estimate leans toward Obama partly because our polling charts for Florida, Michigan, Ohio, Pennsylvania and Wisconsin give the president leads over Romney of between 4 and 7 percent, the range that we qualify for "lean" status.

For the moment, no states fall into the "lean Romney" category.

We classify states as "strong" for Obama or Romney if either candidate leads by 8 percentage points or better or, where polling is not yet available, if a state has consistently supported the Democratic or Republican candidate in recent presidential elections.

The states of Iowa, Missouri, Nevada, North Carolina and Virginia are classified as toss-ups, because the trend-line charts for those states show 3 percentage points or less separating the candidates.

We're also calling Colorado a toss-up on the basis of the most recent state poll, released on Wednesday by Purple Strategies, which shows a tie between Obama and Romney (47 percent each).

The tally displayed at the top of the map currently gives Obama 298 electoral votes, far more than the 270 needed to win reelection, although about one-third of his total (93) comes from the "lean Obama" states.

While this early Electoral College result will cheer Obama partisans, take it with a huge grain of salt. The polls driving the estimates for the battleground states are sparse, and all but a handful of the most recent surveys were fielded in the midst of the Republican primary contest, when the president enjoyed a bigger lead in national polling.

Some background: The methodologies used for both the charts and the map are the same as those that produced the Pollster.com estimates in 2008. Pollster's final 2008 trend charts had the correct winner ahead in all but two states and missed a perfect projection of the Electoral College count by just a single electoral vote.

However, the polling environment today is very different from that in the final week before a presidential election. First, while pre-election polling in September and October will typically provide an accurate snapshot of the outcome, polling conducted six months before the election is far more prone to error.

Second, and more importantly, the current volume of polling is a tiny fraction of what we will see during the fall campaign. In the last week of the 2008 election alone, Pollster.com logged more than 300 statewide polls, mostly from battleground states. As indicated by the table below, over the past 12 weeks since Feb. 1, 2012, we have entered 63 statewide polls on the Obama-Romney contest in battleground states, including just 12 since Rick Santorum exited the primary race on April 10. 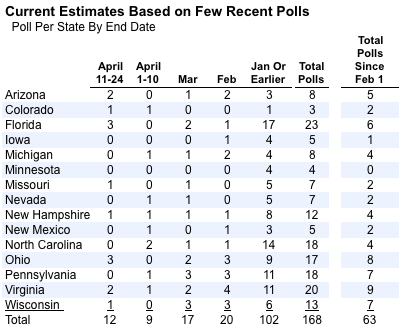 The timing is important, because most of the recent statewide polls were conducted in February and March, when national surveys typically showed Obama leading by larger margins than those measured over the last two to three weeks. If the current national standings persist, the map will likely shift more in Romney's favor.

As the volume of polling increases, HuffPost's new election map offers some features that will become even more useful. First, a state-by-state table below the map shows the current estimate of the Obama-Romney voter preference where polls are available. The table identifies the winner of each state in the 2000, 2004 and 2008 presidential elections (use your mouse to hover over the letter R or D in the appropriate column, and a small box will display the main candidates' vote percentages in that race; see the illustration below). The table can also be sorted by any of the data columns, including the past results (just click on the relevant column heading). 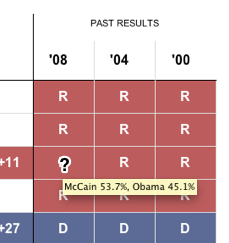 Second, there is an alternative "cartogram" view of the map, which renders each state as a circle sized in proportion to its number of electoral votes. While the cartogram distorts the geography, it provides a more accurate visualization of the current poll standings in the Electoral College contest. You can move between the two views by clicking the "traditional map" and "cartogram" buttons at the top right.

Finally, HuffPost's election map and polling charts remain works in progress that we will continue to refine and improve over the course of the campaign. Please use the comments section to let us know what you think.