Here's some of what's being said about this campaign -- from a public opinion perspective -- as we enter its final few days: Gallup leans too Republican. Ohio and Iowa polls have too many Democrats. Obama can't be winning if Independents are going with Romney by double digits. The national numbers and the state polls are telling two different stories. All of the above are probably true. But instead of creating confusion, our sense is that it's leading to some clarity. With five days to go before the election, it is now pretty clear that -- barring a destabilizing external event -- Mitt Romney will likely win the national popular vote for president. The only remaining question is whether the president's Midwest firewall will hold and give him an Electoral College victory.

More than anything else, we strongly believe in three predictive indicators, all of which suggest that the president will lose the popular vote. First is his current vote share, which stands at approximately 47-47.5 percent. Incumbents rarely improve on their final poll numbers by more than one or two points, putting Obama at approximately 48-49 percent on Election Day.

It is highly unlikely that the president can win this election if he is losing Independents by double digits. And there aren't any indicators suggesting that Democrat turnout will be large enough to compensate for that.

Which leads to the third point: voter enthusiasm and energy is with the GOP. A recent Pew poll had Republicans with a 14-point lead over Democrats in terms of vote likelihood.

Put these three elements together -- Obama's current vote share, Romney's lead among Independent voters and overall GOP enthusiasm -- and it strongly suggests that Romney will win the popular vote. But if you want some more empirical data... here you go.

Using a regression equation, we were able to produce a model trend and project Romney's vote share out to election day. As of today, the model trend says that Romney is +1.9 percent. Tomorrow he would be +2.2 percent. Friday is +2.5 percent. The intercept is almost exactly +3.5; in other words, the below model suggests that Romney will win the popular vote by 3.5 points. Now let's assume this trend flattens a bit because of Super Storm Sandy. Our current estimate (which we will update next Tuesday morning) suggests that Romney will capture 51 percent of the popular vote to Obama's 48.5 percent. The trend line-based on 26 national polls conducted over the last 30 days --is both unmistakable and virtually unassailable. 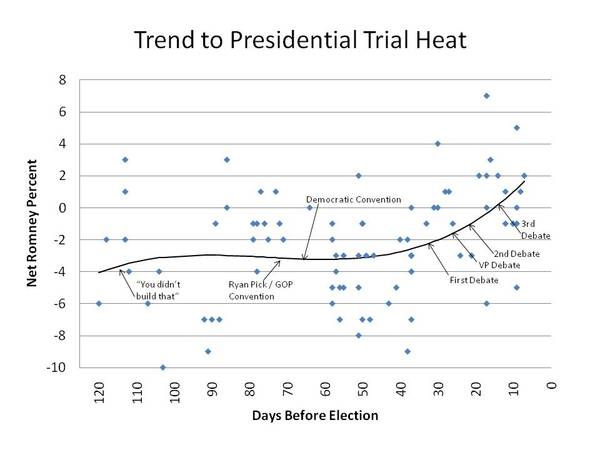 Here is our up-to-the-minute take on the current environment:

All of the above is telling us one thing: this race is exceedingly close. We said a few weeks ago that this will come down to Ohio and we stand by that. The polling in Ohio shows the president up two to four points (and some have the president leading by even more than that). The question is whether Democrats are being oversampled; our gut instinct is that they are. If they are not, then Obama wins the state and wins the Electoral College quite handily. Both camps have a strong "ground game" in the state, but our inclination is to look at voter enthusiasm and Republicans have the edge there. Wisconsin, Iowa, Colorado and NH are also too close to call at this point. Nevada is leaning Obama and Virginia and Florida toward Romney.

On Tuesday morning we will release our final popular and electoral vote projections.

Thanks again to Pete Ventimiglia, Kelsey Cohen, Chris Blunt and Allison Quigley for their insights and contributions to the Election Monitor. Follow us on Twitter: @Steve_Lombardo.