Later on tonight, Mitt Romney will string together a winning coalition with victories in states ranging from Virginia to Colorado, capturing the popular vote by nearly two points and a sizeable majority of electoral votes, making him the 45th President of the United States.

We make this projection with full knowledge that a shift of one or two points in any of six key battleground states could hand Obama the election. But there comes a time when you have to make a judgment and that time is upon us.

On the one hand, we are well aware that the majority of swing state polling is giving an edge to President Obama. Conversely, state and national polling data show Governor Romney winning political independents by large numbers. Never before have we faced so much contradictory data. More than ever we are making this projection based on gut instincts wrapped around science. In the end, we are making our projection based on the belief that most polls are over-sampling Democrats. For example, the final Washington Post/ABC News tracking poll had 35 percent Democrats, 29 percent Republicans. If by the end of today Democrats are +6 then the President will win reelection. But we think the ratio of GOP and Democratic voters will be closer to even; Democratic turnout will certainly fall well below 2008 levels.

This election rests on the composition of the electorate. Yes, it's a cliché but it's also true: this election is all about turnout. Turnout among young voters (a cohort the President wins in most polls by upwards of 20 points) will be far below 2008 levels. We believe the electorate is going to look a lot more like 2004 or 2010 than 2008; if that is the case, Romney will win. Here is our rationale for going with Governor Romney: 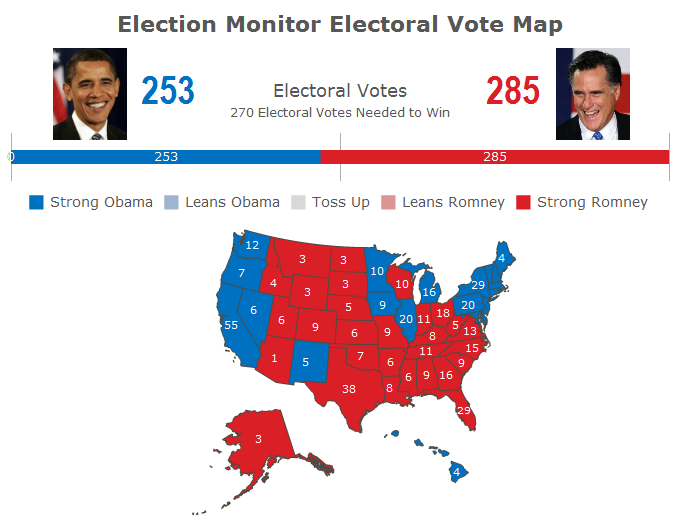 Our regression vote model projects that Romney will win by a little less than two percentage points today. We project the following popular vote distribution:

Below is our final regression projection line. Today's analysis produced a flatter curve than we have seen in recent weeks; Sandy has clearly blunted the Romney momentum. In light of the last-minute polls the trend has been revised downward. We are getting a final estimate of +. 75 for Romney. When we correct for turnout, we get a 1.9-point Romney popular vote win. 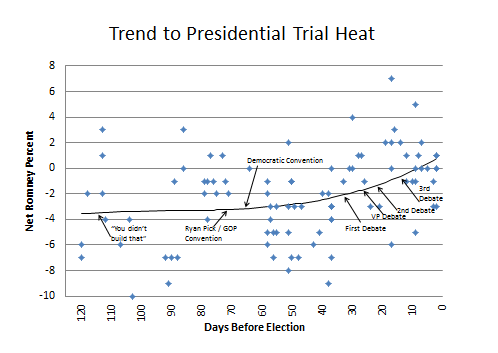 Romney's victory will come because he recaptured three southern states that Obama managed to win in 2008: Florida, North Carolina and Virginia. Remember that Bush won Florida by five points in 2004 and Obama only won the state by 2.5 points in 2008. Similarly, NC went big for Bush in both 2000 and 2004 (12-point margin) and Obama won in 2008 by less than half of one percent. VA is, of course, the biggest prize of the three "southern" states and the most like a "swing" state (it's also the most competitive this year). Bush won by eight points in 2004 and Obama won by six points four years later. Obama will not have the young and minority voter turnout he had in 2008 and will likely lose Virginia this time around by less than two points.

Ohio is the most vexing of all the states this year. As we stated earlier, dozens of polls have shown the President with a one-three point advantage over the last two weeks. Again, our sense is that Democrats are being over-counted in that polling. Romney has had double-digit leads among Independents in numerous OH polls. Again, we are doubtful that Democratic turnout and popular vote margins in Cleveland's Cuyahoga County-as well as Columbus, Cincinnati, Akron and Toledo-will match Obama's 2008 totals. The President's vote margins came from exceptionally high African American turnout, and that is unlikely this year. Additionally, Obama has a problem in some of the coal-producing counties like Belmont, Harrison and Perry. There is no doubt that the auto-bailout helped Obama in this state but in the end we think Ohio will go to the Governor by about one point and give him the election.

Wisconsin will benefit from the Walker machine and Paul Ryan's presence on the ticket. It will follow Ohio and give Romney a one-point victory. Colorado is also tight but our sense is that it, too, goes to Romney. Obama has rarely been above 47 percent in Colorado and is unlikely to top out above 48.5 percent. Romney wins by two points.

Finally, here is how we see the Senate and House races:

Republicans will pick up two seats in the Senate getting to 49. In the House, we think the GOP will pick up one seat (a virtual status quo election) giving them 243 seats, compared to 192 for the Democrats.

Special thanks to Kelsey Cohen, Chris Blunt, Pete Ventimiglia and Allison Quigley for their insights and contributions to this monitor. I should be clear that not all of the above agreed with the final projection here. We had a spirited debate. Ultimately the final "projection" is my own.