As the presidential campaign heats up, temperatures are rising among homebuyers. Nearly a thousand of them let off some steam in Redfin's latest survey, which asked for their opinions of Hillary Clinton, Donald Trump, Bernie Sanders and election-year politics.

Redfin has been asking homebuyers and sellers about the presidential campaign all year, with interesting results. Our respondents this time skewed young. Forty percent were millennials and more than 37 percent were first-time buyers. Here's what they said.

Buyers Are More Pessimistic About the Election

Homebuyers hit a gloomy note last month when we asked about the presidential election, with nearly 27 percent saying it will make the housing market worse.

That doesn't sound like much, but it's almost double the negative response we got in February. Far fewer buyers said the election would have no effect on housing and the share who think it will make the market better inched down. 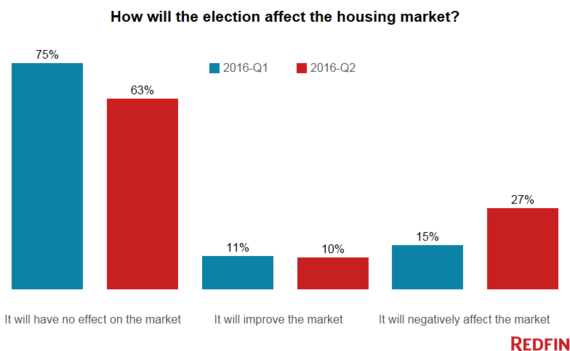 What's going on? More than 200 survey respondents elaborated on their answer. Most said the direction of the housing market will depend on who wins in November. No surprise there.

Regardless of who does move into the White House, though, he or she might be unable to accomplish much, others said.

"With all the political in-fighting the country has had in the past, it is unlikely the new president will be able to soothe both sides immediately and that may cause instability to the market," a first-time buyer in Virginia wrote.

And many said our current crop of candidates and the political discord in Washington might give buyers second thoughts going into Election Day.

"This election is a true embarrassment and a circus," said a buyer in Atlanta who said she'd seriously consider leaving the country if her candidate loses.

Emotions Are Running High, but Not That High

Ten percent of buyers we surveyed last month said they'd consider leaving the country if their candidate lost the election. Two percent said they'd give it serious thought but only a handful vowed to actually do it.

So to the Chicago buyer who told us prices will fall when everyone moves to Canada or Australia after Election Day -- good luck with that. 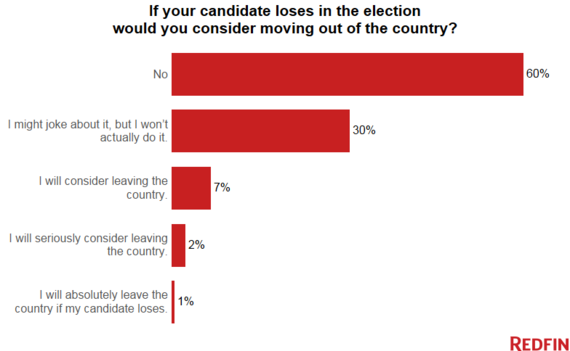 Here's an interesting wrinkle. Buyers who named Sanders the best candidate for housing were far more likely to consider leaving the country if their candidate lost. Six times more likely, in fact, than buyers who gave Trump a thumbs up on housing policy.

"One of my clients explicitly told me they're selling their home and moving to Canada regardless of who is elected. He thinks any of the current choices will send the U.S. into a downward spiral," Redfin real estate agent Alin Glogovicean said. "The election is definitely weighing on some of my clients."

Which Candidate Is Best for Housing?

When we asked buyers in March to tell us which candidate would be best for the housing market, 10 contenders were still in the race. Back then, Sanders got the most support from homebuyers, followed by "someone else." (Sellers picked someone else over everyone else.)

Last month, with only three candidates left, a plurality of buyers -- nearly 28 percent -- said the housing market would be better served having someone other than Sanders, Clinton or Trump as our commander-in-chief.

"I'm not sure any of them will do much to improve the housing market," one Boston homebuyer said. 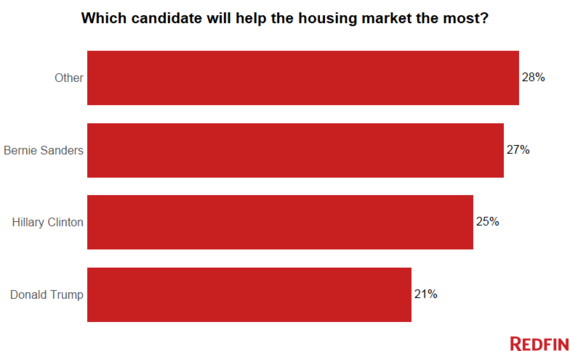 "Who knows? I haven't heard clear plans from candidates about housing issues," said a millennial house hunter. She's right - the campaigns have had almost nothing to say about homeownership, mortgage credit or housing affordability.

Among White House hopefuls, Sanders continued to command an edge, with 26.5 percent of buyers in our survey endorsing him as the best candidate for housing. Those respondents also were more likely to be first-time buyers worried about affordability and high rents.

"I truly think Bernie Sanders has the best interests of the middle class and low-income people at heart," said a first-time buyer in Sacramento. "He has ideas that will bring the classes to a more equal playing field."

Buyers cited Trump for his financial experience -- "a businessman may be what we need to look at political issues from a different perspective, including housing," said a buyer in Maryland. Clinton got hat tips for her "pragmatism."

"While homeowner anxiety over the election is clearly mounting, the likelihood of an immediate shock to the market is slim," Redfin chief economist Nela Richardson said. "It will take considerable time for our next commander-in-chief to implement policies that have any impact on housing."

While our survey respondents might have little faith in the current crop of candidates when it comes to housing, politics can determine who can afford homeownership and how and where people live. It's important. Here are six pressing housing questions the presidential candidates should be answering.

"The next president will inherit the lowest homeownership rate in 48 years and so far the voters have heard little to nothing about what the candidates will do to boost people's chances of becoming homeowners," Richardson said. "Candidates need to start discussing housing on the campaign trail now."

Redfin's survey was conducted May 17-23, with responses from 975 homebuyers in 36 states and Washington, D.C.