WASHINGTON -- Political junkies have been scratching their heads again this week as another batch of national surveys produced results ranging from a 13-percentage point lead for President Barack Obama to a 5-point advantage for his Republican challenger, former Massachusetts Gov. Mitt Romney.

When rolled together into the HuffPost Pollster chart, the collective result from all the polls remains roughly where it has been for the past month and for much of the period before the contentious Republican primaries: Obama holds a narrow net advantage in the national polls, just under 1 percentage point.

Poll watchers are busily speculating about the cause of all the variation. But for those who care about where the race is headed, the most important results of the week might be those from an in-depth survey from the Pew Research Center, which measured voter interest and engagement in the presidential election.

The Pew Research survey found that voters are less engaged in the presidential campaign now than they were four years ago, just as the hard-fought Democratic primary battle between Barack Obama and Hillary Clinton was drawing to a close. "Voter engagement today generally equals or surpasses levels from the four campaigns prior to 2008," the report concludes, "indicating that 2012 could be another relatively high turnout election." 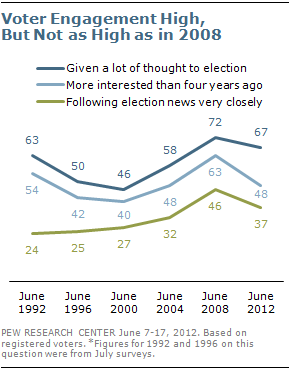 The most consequential finding from the Pew survey, however, might be this: "Republicans hold the edge on several turnout measures, in contrast to 2008 when Democrats had leads -- some quite substantial -- on nearly every indicator." Most notably, Republicans are more likely to have given quite a lot of thought to the election (73 percent) than Democrats (66 percent). Republicans are more likely than Democrats to say they were paying very close attention to election news (45 percent compared with 37 percent).

The most positive news from the survey for Democrats is that Democrats are more satisfied with their choices than Republicans (68 percent versus 60 percent). Similarly, more voters say they support Obama strongly (30 percent) than support Romney strongly (17 percent).

The Republican edge on interest in the campaign, however, is potentially troubling for Democrats, given the strong though imperfect relationship between engagement and turnout. If that gap persists, it suggests Republicans will enjoy a turnout advantage in November that would improve Romney's standing. 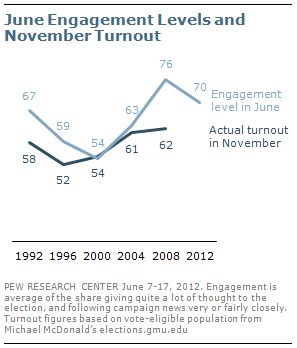 At the national level, only a handful of pollsters have started to narrow their focus from those who self-identify as registered to vote to the smaller group that are likely to vote in November. Those pollsters are typically producing slightly better results for Romney, which is consistent with the historical pattern.

For the moment, however, much of the "likely voter" data seen in national horse race polling comes from just one source: the automated, recorded voice polls produced by Rasmussen Reports. Its surveys have shown Romney as doing slightly better than other polls have. Rasmussen Reports' most recent release is the best for Romney in the last week. It shows Romney as leading Obama by 5 percentage points (48 percent to 43 percent). But there may be more at work here than just the likely-voter screen. In 2010, Rasmussen's surveys overstated the standings of Republican candidates.

Although its latest survey included many measures of voter engagement, the Pew Research Center is not yet reporting results among likely voters. Its standard procedure is to wait to calculate likely voter estimates until September or October. Why?

These "measures of engagement and intention to vote are useful as indicators of likely turnout on the aggregate level" at this stage in the campaign, "but they are only loosely predictors of whether an individual is or is not likely to vote this November," according to associate research director Michael Dimock.

"As we get closer to Election Day," he added, "particularly after the conventions and into the debate season -- these indicators become stronger."

One good reason for this decision is that while not all registered voters cast ballots in the presidential election, most do. According to the U.S. Census, roughly 90 percent of those who said they were registered in November 2008 also said they had voted. (The turnout rate for all eligible adults in 2008 was lower, roughly 62 percent.)

Questions about registration and turnout, even those asked by Census surveys, tend to overstate vote intent and behavior. That limitation is another reason why many pollsters wait until the fall to narrow their samples to the most likely voters.

If the current patterns persist, the numbers for Romney will likely improve a bit when pollsters begin to calculate likely voter estimates. But as with any poll, those patterns are a snapshot. They may not persist.