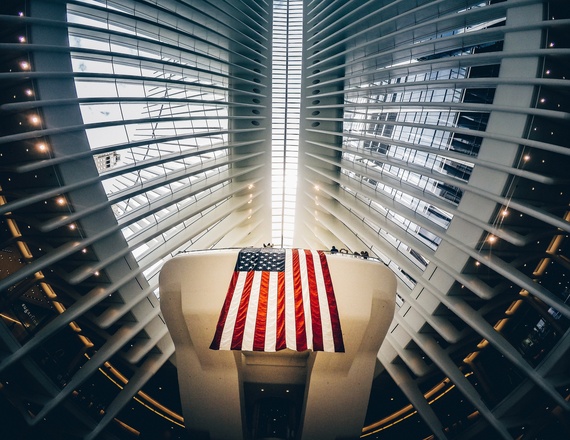 It's hard to argue with that sentiment after the recent US election. However, my interest is more on the side of how the show-business effect impacted Millennial voter turnout than in the antics and theater of any particular candidate.

To that end, it is important to note that in the US only about 50% of the eligible Millennial population actually cast a vote, versus an average of about 57% for the general population, a figure that, in and of itself, is sadly and pathetically low and, in fact, a few points lower than the last US presidential election.

Now, contrast this with the rest of the world, and by world I don't mean the countries where voting is compulsory. I mean the world where voting is mandatory as a public service. In October, The Guardian reported,

If you are interested, I recommend you read the Pew Research Center on this. It's fascinating to see how voter registration varies country to country, and I'm sure you will have, like me, your own take on why.

But back to Millennials.

While I usually hate writing about labels and have never believed the "experts'" view on the monolithic "movement" status of this generation (once again proven by this election), the ganging together of an age group as an aggregated audience is a convenient way to knock off some sacred cows.

To begin with, a critical numerical line has been crossed. According to Pew Research Center from May,

Yet, here is the critical piece of data...while many were counting on that youth vote to propel a different outcome, the truth is that:

...the high-water mark for Millennials was the 2008 election, when 50% of eligible Millennials voted. By comparison, 61% of the Generation X electorate reported voting that year, as did even larger percentages of older eligible voters. In 2008 Millennials comprised 18% of the electorate, but as a result of their relatively low turnout they were only 14% of those who said they actually voted.

But wait...it gets worse according to Pew:

Millennial turnout was less impressive in 2012, when 46% of eligible Millennials said they had voted. Since the oldest Millennials were 31 years of age in 2012 (as opposed to 27 in 2008), the expectation might have been that turnout would have edged higher. After all, an older, more mature, more "settled" age group presumably should turn out at higher rates. This underscores the fact that young-adult turnout depends on factors besides demographics: the candidates, the success of voter mobilization efforts, as well as satisfaction with the economy and direction of the country.

Depends on more than demographics? My starting point...obvious, no?

And according to the US Census,

Maybe not so obvious.

Look at the recent Brexit vote in the UK. The data - not surprisingly - seems all over the place. Some sources claim a very low Millennial turnout and others peg the number much higher. VICE reports the numbers at the highest.

I've just got the figures back from our other survey, which is from a fresh sample, and what we found is that turnout among voters eighteen to twenty-four was sixty-four percent. Now that is an estimate, because it's always an estimation, but it comes from an actual survey where people were asked whether they voted or not, and whether they registered or not. We also controlled for over-reporting of electoral participation, because people always have a tendency to tell you that they voted even if they did not. So even when you account for all of that, we find is that turnout among eighteen- to twenty-four-year-olds was about sixty-four percent. That would be the highest turnout among eighteen- to twenty-four-year-olds for the past twenty-five years.

But every other source had it far lower. The Guardian reported,

We cannot know for certain the demographic turnouts on 23 June, because there was no exit poll. So don't let any figure thrown around under pretence of being cast-iron fool you. That figure does not exist. But we have some guidance. Sky Data put 18-24 turnout at 36% and 25-34 turnout (also millennials) at 58%: but it was projected - representing those who said they were certain to vote and had done so in the past. Data crunched by the FT found that "on a general basis, areas with younger populations had lower turnout" and the Guardian, Telegraph and BBC data all back this up.

Clearly, given the poor performance of polls, none of these numbers, either in the UK or in the US, fill me with deep conviction...yet based on all that I have read, heard, and seen I would say we do have a problem of an engaged younger electorate, but I don't believe it has anything to do with the candidates, the issues, the economy or the general direction of anything.

For one, I give this generation some credit for caring...in fact, for caring deeply about the world. The problem I believe is a lack of understanding of how the levers of power actually work and, as a result, in how to actually make a difference in the world.

For one, we are living in a glut of uncurated, unverified, highly questionable information or maybe better put words...as it's often unclear what's real and not.

Although Millennials may not be sharing political content, Facebook remains a major source of news. According to a June 2015 Pew Research Center study:

About six-in-ten online Millennials (61%) report getting political news on Facebook in a given week, a much larger percentage than turn to any other news source. This stands in stark contrast to internet-using Baby Boomers, for whom local TV tops the list of sources for political news at nearly the same reach (60%).

Roughly a quarter (24%) of Millennials who use Facebook say at least half of the posts they see on the site relate to government and politics, higher than both Gen Xers (18%) and Baby Boomers (16%) who use the social networking site.

And Twitter seems to be no less a source of news for many. As reported by California Magazine:

It's the year Twitter catapulted billionaire Donald Trump from being a long shot to being the GOP nominee, in part thanks to his uncanny penchant for newsmaking in 140-character posts, which reaped millions of dollars in free publicity for his campaign during the crowded GOP primaries. The stunningly effective strategy sparked veteran journalist Tom Brokaw to wonder if the billionaire businessman may become the first "to tweet his way to the White House". [emphasis mine]

On the Democratic side, Vermont Senator Bernie Sanders, boosted by Millennial voters, churned effective social media outreach into a fundraising bonanza - the average donation was $27 dollars - along with mega-rallies, which threatened to upend the campaign of frontrunner Hillary Clinton. Meanwhile, the former Secretary of State, who introduced her 2016 campaign on Facebook, fully graduated to Snapchat, Instagram, and Twitter - this time in Spanish - and celebrated her historic nomination with social media emojis celebrating "The Woman Card," among other things.

Now, to be clear, I do believe that news channels actually amplified the social message, and that is where Trump triumphed as he wasn't bound by the Digibabble that, in my opinion, limited some of the Democratic Party operatives. And, I'd also posit that Trump and Bernie shared the mega-rally strategy, a decidedly analog way to make news and spread the word.

It seems to me there is a critical missing link, a crucial disconnect, an essential gap between what we think we know about millennials, their pursuit of causes, their consumption of news, and their compulsion to share.

The Guardian speculated as follows:

[T]ech can be helpful when encouraging engagement -Facebook's voter status initiative, for instance - and I see that changing your profile picture to a French flag, or a Rainbow flag helps you to feel better and does contribute to a nicer, supportive tone of discourse - it has its place - but when it comes to affecting policy change, it's as good as hovering a pencil over the box and crossing the air.

Bottom line? We have lost touch with reality. People no longer understand how elections work.

The one theme that seemed to emerge in the chaos and confusion of the RNC was, feelings were king, and viewers experienced a "four-day exercise in exercising feelings over facts".

We even experienced the following, as reported by Wired and many others:

America's electoral system is already kind of a mess. Now, Twitter trolls are doing their best to make it even more confusing by spreading disinformation about how to cast a ballot on election day. The latest example: Donald Trump supporters are spreading memes on Twitter in both English and Spanish, trying to trick Hillary Clinton supporters into thinking they can vote by text.

Have we become so confused that anyone would take such misinformation seriously?

Why not? When such a large percentage of the so-called news being shared online was laughably false. And let us not forget the increasingly narrow silos of information which, true or not, are skewed one way or another. Vox reported,

Reddit is a popular news aggregator in which users vote about which stories to promote to the front page. And by March of this year, the politics section of the site had become dominated by Bernie Sanders supporters. As a result, if you relied on Reddit for your political news this spring, you basically only saw stories that praised Sanders and criticized Clinton and the Republican candidates.

We live in a world where Reality and Reality TV are often confused with each other, where sharing and liking are considered action, and where our skills at discerning the truth are being challenged, to say the least.

Summing it all up I turn to a statement made by Jennifer Lawrence - not because I think she is an influencer, (next week I will tackle that topic) but because it speaks volumes to the problem we all face:

We're all allowed to be sad that the present isn't what we thought it was. But we mustn't be defeated. We will keep educating ourselves and working twice as hard as the man next to us because we know now that it is not fair. It is not fair in the workplace, so you make it impossible to fail. And like Hillary, it might not work.

But like Hillary, you can still be an inspiration and get important things done. Do not let this defeat you--let this enrage you! Let it motivate you! Let this be the fire you didn't have before. If you are an immigrant, if you are a person of color, if you are LGBTQ+, if you are a woman--don't be afraid, be loud!

Where is the admonition to go out and vote? To get involved in the process. To make a difference by actually making a difference.

So, no matter where you live, voting, taking real action, is the only way to effect serious change.... until the revolution, and we all know where that can lead.