WASHINGTON -- The 2010 midterm elections were the first of a new era, one in which campaign finance rules no longer limit the amount of money special interests can raise and spend on political advertising.

In the wake of the Supreme Court's dramatic Citizens United ruling in January 2010, much of the initial attention was focused on the possibility that corporations -- suddenly freed from key restrictions -- would start to spend enormous amounts of money directly from their treasuries on political advertising.

But that didn't happen. Ahead of last November's election, only three companies spent a total of $54,500 that way, according to the Center for Responsive Politics (CRP).

Instead, it turns out the big money is flowing into third-party organizations first.

As long as they operate independently of political candidates, Super PACs, a new kind of political action committee legalized last year, can accept unlimited donations -- and they did so in the 2010 election cycle, to the tune of a whopping $65 million. Corporate treasury money accounted for about $15.5 million of that; the rest was individual donations, the CRP estimates.

Add that amount to the spending by preexisting advocacy groups, and the result was that outside spending on elections was almost as high in the 2010 mid-terms as it was during the 2008 presidential election cycle -- and more than four times what it was in the previous mid-term election. 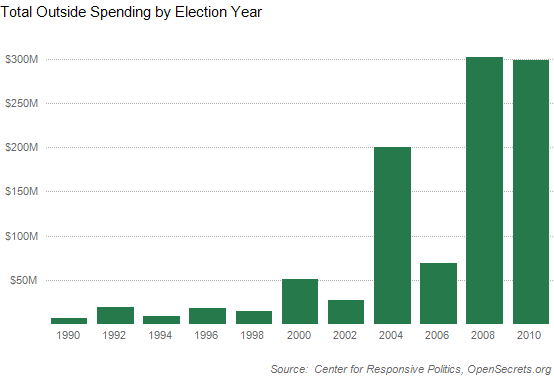 Most groups are still obliged to disclose their donors.

But the most striking aspect of the 2010 cycle was the growth of the so-called "non-disclosing groups." These are nonprofit organizations that are allowed to engage in political campaigning, but don't have to tell the Federal Election Commission who their donors are. These groups used to be barred from explicitly advocating for or against specific candidates. But now they can do pretty much anything, as long as they don't coordinate with a candidate's campaign. And spending has shot up.

The spending of untraceable money has become particularly popular with conservative organizations like the U.S. Chamber of Commerce, which spent almost $33 million in the 2010 cycle; the American Action Network; and Karl Rove's nonprofit organization, Crossroads Grassroots Policy Strategies.

Heather Torres, the chief data scientist at AOL, contributed to this report.