Based on the most recent set of estimates produced by my model, the distribution characterizing uncertainty in Obama's Electoral College count lies almost entirely to the right of 270. The expected or average outcome is 304 Electoral College votes for Obama, although 290 is the single most likely outcome (observed with 13% probability). 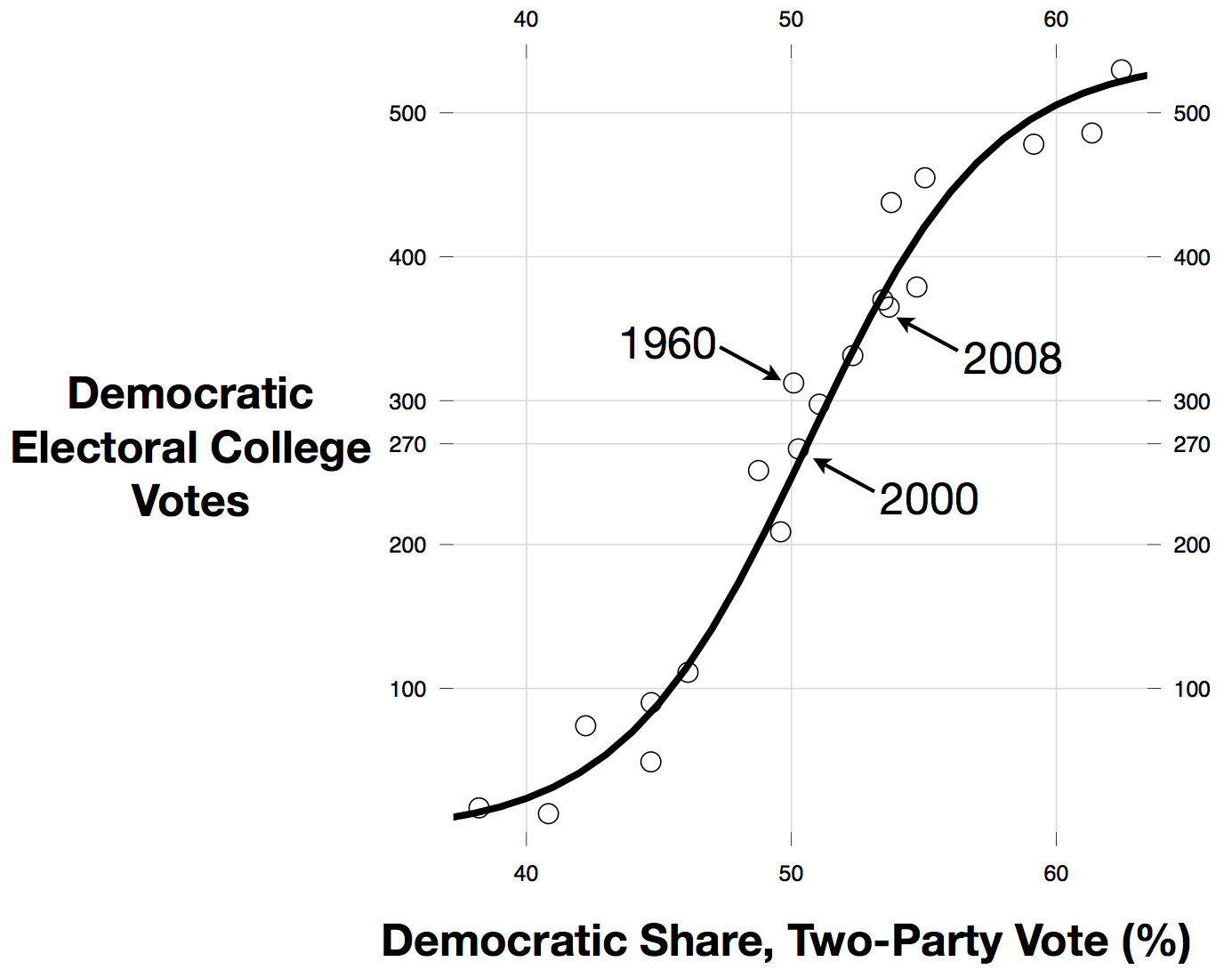 That is, it is hardly out of the realm of possibility for a Democratic candidate to win a presidential election with 50% of the national, two-party vote (or less), but it is somewhat improbable. Indeed, the analysis here implies that the probability of a Democratic win in the Electoral College given a 50-50 result in the two-party, national vote is 36.6%.

That is, the scenario we're seeing in the polling today is somewhat unusual given the historical record, but not freakishly so. It might be even less unusual by Election Day.

In short, where Romney's winning, he's almost always winning by a lot. Obama's leading in more than a few states by just a little, generating a more efficient translation of support into Electoral College votes than Romney. How this came to be will be a big part of the narrative of how the 2012 election was won or lost.

Technical notes: the line on the graph is actually a regression line, produced by fitting a regression to the log-odds of the Democratic nominee's Electoral College share of the two-party Electoral College vote on the log-odds of the Democratic share of the national, two-party presidential vote. While linear on the log-odds scale, these seats-votes regressions typically produce sinusoidal curves when plotted on the scale of the proportions. If the Electoral College were based on proportional representation (rather than winner-take-all, by state, except for Maine and Nebraska), the fitted surface would be a 45 degree line. The fitted log-odds on log-odds regression here has an intercept of -0.17 and a slope of 7.2; the r-squared is 0.95 and the residual standard error ("sigma hat") is 0.47. Simulation methods were used to induce confidence intervals and probabilities for the scenarios discussed above; I implemented a Bayesian regression model in JAGS with some extra computation to derive posterior predictive densities over Electoral College counts given 50% national, two-party vote shares, etc.