In one of his recent HuffPost columns my colleague Jeffrey Sachs asked "Why does the actual vote count for so little [in the U.S.]?" Sachs proffered the explanation: "People vote for individuals, not directly for policies." Sachs' aspiration for his home country illuminates one of the most fundamental flaws in Southern European democracies as well: in parliamentary elections voters cannot (even) vote for individuals...

In Southern European countries, like my native Portugal, voting ballots require us to check boxes adjacent to symbols that represent political parties, and not individual representatives. Each checkbox corresponds to a list of candidates ordered by their respective parties' leadership. Altogether, these leaders have been elected by roughly 3 percent of the entire national registered voter base; i.e., by the affiliates of their parties in "primary elections." This means that in the 2011 elections the alternatives available for 9.6 million registered voters were chosen by, at the most, only three-hundred thousand people. Not to be misunderstood: in Portugal we do not vote on some orderly list of specific names, which these 3 percent of voters have caused to appear on the ballot. Rather, we vote on a single "closed list" (period!) following the D'Hondt method to convert the aggregated number of votes in each party-list into elected candidates and parliamentarian seats. Some of the practical results of which are: (1) voter-elected ties are not distinguishable; (2) voters like myself do not feel represented; (3) the representative who believes s/he is representing me has no way to even identify me as his/her constituent; (4) voters cannot hold anyone personally accountable for political positions and/or decisions vis-à-vis a voter's individual policy preferences; and (5) a distorted incentive system that lacks political entrepreneurship.

In sum, 97 percent of the Portuguese voters may not be represented in Parliament. This is not a representative democracy; it is a democracy for the 3 percent! Since prior to the 1974 Carnation Revolution, which ousted a 41-year dictatorship, this figure was even lower, I can then only assume the Portuguese are supposed to consider themselves very lucky with the current system. Maybe not?!

In other European countries, however, the electoral system allows voters to express their preferences for specific individuals and let their choices determine the order of election; i.e., open list systems. Only 36 percent of the countries worldwide use one of these two types of "list proportional representation" (List PR) in their electoral systems. 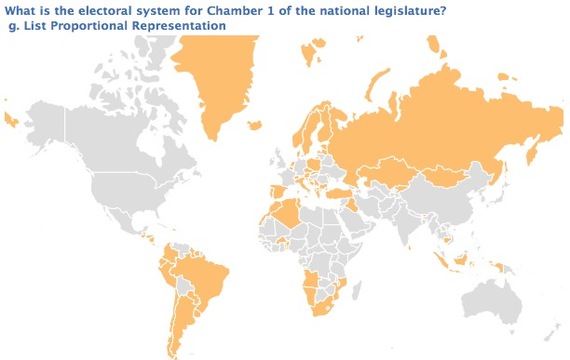 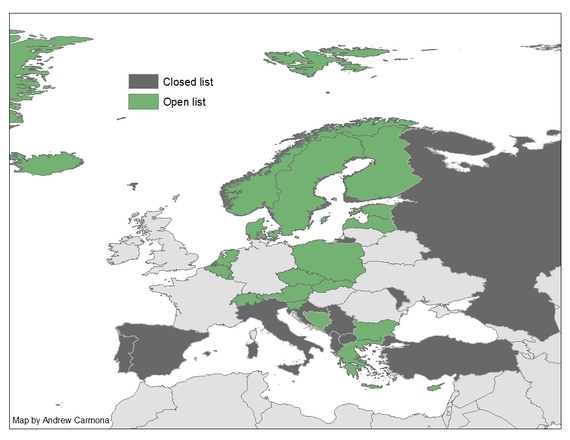 The U.S. does have a problem of inequality (Gini = 45) but their citizens can call or write the exact individual for whom they voted, hold him/her accountable and decide whether or not to vote for him/her again.

Sachs also mentions the desirability of having a stronger direct democracy system in place in the U.S., not just for individuals, but also for direct policy voting. Even though there are several problems and limitations with the U.S. political system, such as corruption and plutocracy, my American friends are even "luckier" than the Southern European voter in what relates to direct democracy. The discrepancy between the U.S. and Europe in what concerns direct democracy is shocking and absurd in this day and age. Current electoral systems in Southern Europe are an assault on the ideal of a modern democracy and, as Jean Jacques Rousseau would argue, popular sovereignty shall counter-weight the absolute power of kings, emperors and political elites.

Direct democracy in the U.S. can be traced to the New England Colony of Connecticut, when in 1639 its citizens adopted by constitutional referendum its "Fundamental Orders of Connecticut"; i.e., the predecessor to that state's present day Constitution. The state of Idaho's legislative referendum on "Compensation of County Officers," in 1892, is indicative of the Progressive Era (1890-1920) in which ballot measures became more commonplace. Since then Americans have been allowed to express their preferences and vote in state elections directly on 7,728 policy measures covering a wide range of local public policy issues. On average, voters in each state have been making direct decisions in about 2.3 alternative policies a year. California, with 1,225 ballot measures since 1911, asks its voters to express their preferences much more often than the next most participatory states: Oregon (852 since 1902), Arizona (452 since 1912), Oklahoma (433 since 1908) and Colorado (400 since 1908). Delaware is the only U.S. state that asks less than in Southern Europe -- it has never asked voters to either accept or reject a particular proposal by direct vote.

With 69 referendum questions on national topics since 1974, Italy is the exception to the rule in Southern Europe. Within the same period, on only three occasions have the Portuguese and the Spanish been allowed to vote on specific policy issues. As for the Greeks and the French: once, and four times, respectively.

In the U.S., by comparison, the 50 percent of the states that only introduced ballot measures in or after 1974 allowed their citizens to decide directly on 1,372 policy measures, which, on average, is equivalent to making two decisions per year in each state.

Switzerland, with more than a century of experience with frequent referendums either about changes to the constitution or other laws, is the European model of direct democracy. More likely than not, it is precisely this system of referendums which guarantees Swiss citizens a maximum degree of self-determination but also an unrivaled stability of its political system, in contrast to the constant political turmoil in Southern Europe.

Top-down features of the Napoleon Code tradition have been used to justify this lack of openness to direct democracy and participation in Southern Europe law codes. This could not be more misleading! The U.S. State of Louisiana's laws, profoundly imprinted by that same Napoleon Code, has allowed citizens to decide on nearly 170 different policies since 1994. After California, Louisiana is the state that asks for the participation of its citizens most frequently (i.e., eight policy issues on average per year).

The political systems' development path from voting on parties to voting on individuals to voting on policies is stuck in Southern Europe. In the case of Portugal, some of the practical results of a democracy locked on parties-closed-list and with a very limited experience of direct democracy are: (1) very low (and decreasing) voter turnout (2011: 58 percent for parliamentary elections and 46.5 percent for presidential elections); (2) lack of political entrepreneurship and institutional innovation as indicated by the regular need of IMF interventions in the country; (3) a political cartel of the two undifferentiated parties that rotate in power; and (4) lack of political accountability. In fact, 2014 will go down in Portuguese history as the year in which the largest Portuguese private bank collapsed and the former prime minister went to jail under accusations of money laundering, fraud and corruption.

Many empirical and theoretical scientists, such as Arthur Lupia, John Matsusaka, Bruno Frey, Maarten Hajer and Hendrik Wagenaar have shown that instruments of citizens' participation, like direct democracy, contribute to a country's overall political and economic stability, governance and happiness. The road from voting on parties to voting on individuals to voting on policies is much needed in Southern Europe if these nations are to address their home-grown ills and expand their representative democracies well beyond 3 percent.

_______________ The author of this post is the founder and director of several programs at Columbia University. He currently leads programs in NYC, Kazakhstan, Egypt, China and Portugal.