This week is the 40th Anniversary of Tom Wolfe's famous "Electric Kook-Aid Acid Test" and I thought it would be high time we take a small moment to reflect upon the influence of drug use on art and culture. In an interview with Time Magazine, when asked if Wolfe thought that the drug culture had been stripped of its intellect, he replied:

"Ha! That's assuming that it had an intellect--particularly in the case of LSD, which everyone assumed opened the doors of perception. We've since discovered that it does the opposite."

I have to say I heartily disagree. For better or worse, there are ample byproducts of drug culture's intellect, including, according to Israeli researchers, the Old Testament, where the drug in a popular drink of the time called ayahuasca induced "the seeing of light and profound religious and spiritual feelings." And anyone who thinks that the Disney illustrators who created Mickey Mouse's frantic repetitive broom exploits in Fantasia weren't on anything are frankly, as we say affectionately to someone who is clueless, "smoking crack". 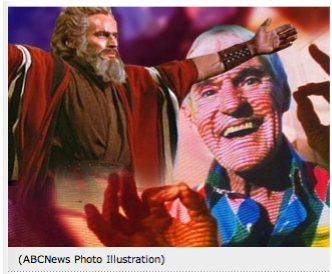 Charlton Heston as Moses and Timothy Leary In Photocollage

Certain art, if done properly, can induce an effect reminiscent of a drug trip just by the experience of the space. Rhythm via repetition can imbue art with a rave-like electronic effect and make the viewer feel like a small part of a larger continuum. It can even recreate the weird battery taste that happens in ones mouth after taking hallucinogenic mushrooms or L.S.D.... not that I would have any idea what I'm talking about with regard to such an activity.

But it's not all bright and technicolor and this is highlighted in recent work of the artist Mike Quinn. Quinn creates installation pieces, sculptures, and paintings using pain killers, pills, anti-depressants, cigarettes (and cigarette packaging), alcohol, soda and more to literally chart the eternal search for happiness and betterment that often plays out through hindrances and impediments while attempting to diet, get happy, move forward, and progress.

Kimberly Brooks: You've recently been creating large wall installations. What do they signify to you?

Mike Quinn: They both have a very rational component (the math /physics element) and a very chaotic component (the addiction / the drugs / the need to escape). Using the inherent rationality of math and physics as a way to look at and depict the irrationality of addiction and chaos in life has been successful. In "March Mad Addiction Descent," there are 31 panels, all with pages from sports sections painted with drugs, installed according to the way a basketball would fall to Earth. It's kind of math in a vacuum though, so we take some liberties - my dad is a physicist and he helps me with the numbers. We make it work for the idea or the space that we have. 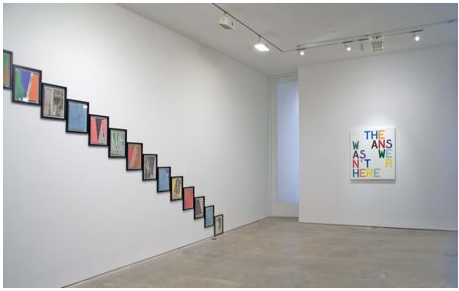 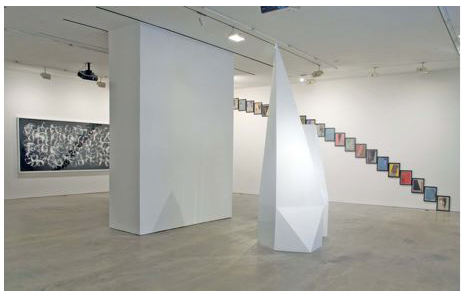 Mike Quinn, MARCH MAD ADDICTION DESCENT (Installation Views), 2007, Mixed media, 31 framed panels: 14.75 x 11.75 inches- each PRG 979-08, Courtesy of Perry Rubenstein Gallery. MQ: March Mad is about waiting for something great and exciting to happen and then watching as it ends how your life goes back to how it was and you have to find ways to cope again. In the "Keeping Up Appearances" piece, I had a gravity line that went around the gallery. I used USA Gold cigarette packs to represent this ever-present force that keeps things grounded. Then we calculated the drag force on a basketball as it falls to earth. This was represented by small gold varsity basketball pins with the prescription code for Welbutrin, an anti-depressant, written on them. The reason I like this work is that it makes loss appear like gain. The drag force increases as the ball falls. And drag and gravity are the two forces that impede things from going up which I think makes sense with my work. Things that impede progress. Here there is also a dialogue about self-medication and prescription medication to achieve happiness.

 Mike Quinn, A Few Minor Victories in a Year of General Failure, 2007 - 2008 Cigarette packs, coffee, Sominex and Benadryl packets & streamers in custom plexiglas vitrines, Diptych- Overall Dimensions: 23 1/2 x 45 1/2 x 3 1/4 inches KB: Was there a single moment that you were inspired to pursue the idea of escapism in your work? MQ: In 1987, when Jordan was 24, he won the NBA dunk contest. The next year, during the 88 season, the All-Star game was held in Chicago, which must have added another emotional component to the equation for #23. He came out and won it again, this time with a dunk that has become legendary. The image of him taking off from the foul line and soaring has sat in the front of mind since. I remember the next morning going to the basketball court behind my house. Familial dysfunction is difficult, especially to children, and I would go there to escape. I remember being conscious of something, maybe for the first time - that my life and life in general was not fair - that there is hardship and pain and suffering, and that you have to find things to escape into in order to make it all tolerable. Jordan was that for me. While I have several different, concurrently developing bodies of work, they all, in one form or another, began with what Jordan did in '88, that image and how I have processed it since then.   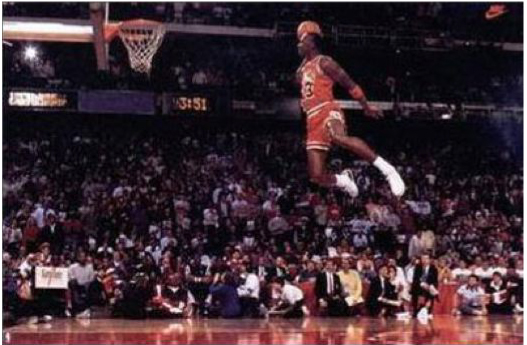 KB: Do you have a process of working that might be unique or curious? MQ: My practice is not relegated strictly to the studio as I'm sure is the case with most artists. I suppose it is less a traditional practice then most however. It sort of takes place at my therapist's office one night, Madison Square Garden the next, then a bar, then alone in front of the TV watching a game, my parent's house. The work happens inside all of this. The materials I use in the work are not traditional either. They are the things I use or abstain from. Things we all use. Vodka, codeine, crushed benadryl and sleeping pills, diet coke, beer, robotussin, tobacco, coffee, Mylanta. And I use the left over packaging too. I paint with this stuff, use it in sculptures. Keep it around and see what happens over time.   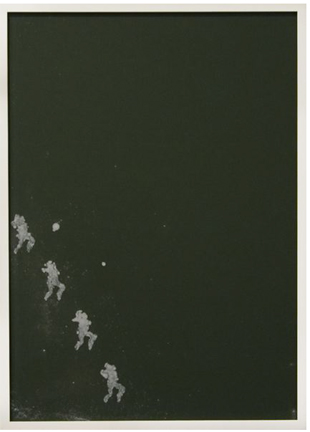 KB: Which artists inspire you the most? MQ: I love and hate a lot. I am a sucker for painting in NY from the 40's through the 60's. Larry Clark. Fred Tomaselli. If there is someone whose body of work has helped me see that it is OK to make work about the things you love and that it is OK to talk about losing it is Werner Herzog. He is so passionate about his ideas and his subjects. He sees value in struggle and how beauty can be terrible. I find the main characters in his movies to be the kind of losers that I appreciate. Tragic men who are trying to achieve, usually end up failing, but inside that failure something else happens. That is a lot like the discourse that I try and develop in my work.   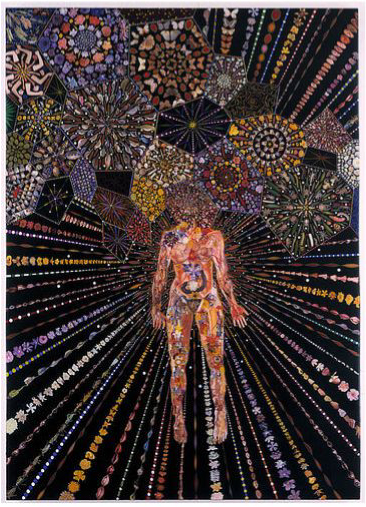 Mike Quinn was born in Hartford Connecticut in 1978 and he received degrees in Art History and Studio Art from NYU. Quinn has had two solo shows in the past year--one at Vanessa Buia and one at Perry Rubenstein. Most recently, he showed his work with Perry Rubenstein at Art Brussels and he is currently in a summer show "Opportunity as Community: Artists Select Artists" at Dieu Donne in NYC with a Closing reception: Friday, Sept. 5, 6-8 PM. 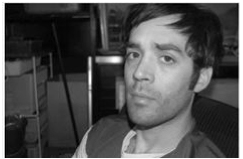 First Person Artist is a weekly column by artist Kimberly Brooks in which she provides commentary on the creative process and showcases artists' work from around the world. Come back every Saturday for more Kimberly Brooks.