Last month, plug-in electric vehicles (EVs) made up the highest percentage ever tallied of total vehicles sold in the United States. This is news for optimism. For an environmental group like the Sierra Club, it is this percentage that we care about more than total EV sales (which were strong, but not outstanding last month). As a way to slash oil use and emissions, we need people to switch from driving to transit, biking and walking -- meaning fewer auto sales and less driving overall. But for the millions who will continue to drive in the near future, we need them to switch to EVs, which are significantly cleaner than conventional vehicles.

According to the latest monthly scorecard from the prolific EV media site InsideEVs, auto manufacturers sold 10,538 electric vehicles (EVs) in the US last month. This includes both plug-in hybrids and full battery electrics. Out of the 1,246,006 total vehicles sold in the US last month, plug-in vehicles made up .85 percent of total vehicle sales in September -- the highest percentage to date according to our calculations.

This portion may sound small, but it's 20 percent bigger than the percentage from September 2013. 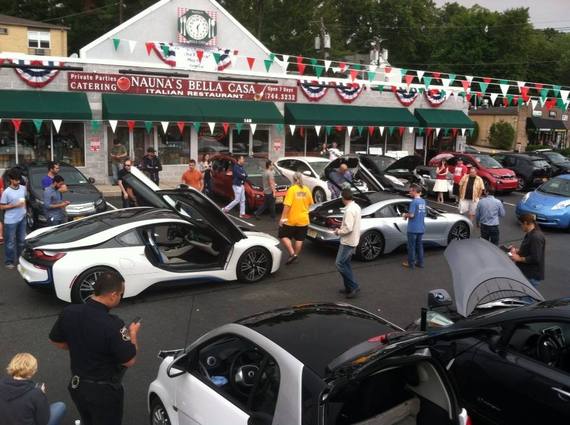 What accounts for this highest ever percentage last month? Presumably, the more than 90,000 people who attended National Drive Electric Week events in 150+ cities in mid-September were part of the reason -not to mention the hundreds of thousands more who read our 200+ media hits from the week's exciting events. The increasing number of appealing plug-in cars on the market must also play a factor as well as glowing consumer reviews of cars like the Volt, the Leaf and the Model S -- to name a few.

For statistic hawks and EV advocates who may be questioning our math, I'll mention a caveat: the EV sales figures reported by the Electric Drive Transportation Association last month were lower than those reported by InsideEVs. The reason is that each is making a different guestimate of Tesla Model S sales, since Tesla reports quarterly rather than monthly. However, the Editor-In-Chief of InsideEVs Jay Cole told me that his team has averaged only about 150 cars higher or lower than the final quarterly numbers over the last few years. Meaning: these guys are really good at estimating EV sales figures.

To reach a tipping point, EVs must, of course, make up a much higher percentage of total US sales. Whether it's five, 10 or 25 percent (think about the point when people quickly started buying TVs or cell phones for the first time) is where the rubber will really meet the road. Consumer rebates, public education programs, utility incentives, workplace charging initiatives and other aggressive EV policies and programs must accelerate to get us there.

Christina Rohrbacher contributed to this article.