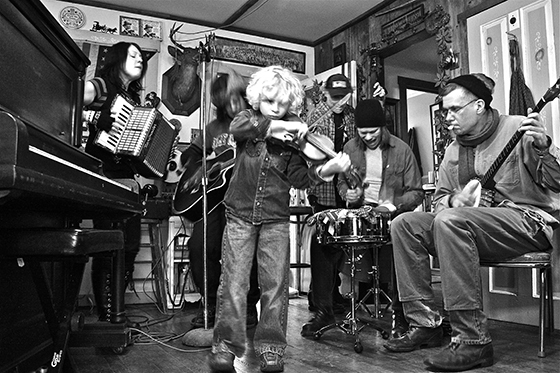 I've always loved European-style folk-rock, also known as electric folk: the application of electric instruments and rock techniques to traditional songs. It's a style you can find here in North America, as well as in Britain and Europe. I've received a few CDs in this style lately, and I'll share my impressions with you, beginning with Marah's Mountain Minstrelsy of Pennsylvania. This proudly monophonic, low-tech vinyl LP-plus-CD release is an homage to an unlikely artifact: an actual, honest-to-God book. The book is Henry W. Shoemaker's pioneering collection of folksong lyrics and other local poetry, originally published as North Pennsylvania Minstrelsy in 1919, and later enlarged several times until it bore the title Mountain Minstrelsy of Pennsylvania. The musicians of Marah began with the words recorded by Shoemaker, but freely adapted them, then added melodies and arrangements to craft new folk-rock compositions.

Having adapted a fair number of traditional songs myself (some of them from this very book), I have to say I agree with most of their artistic choices, especially regarding the lyrics. They've managed the tricky feat of keeping the feeling that the song is of another place and time, while eliminating phrases that have become awkward, stilted, or downright incomprehensible. In this way, they've created a genuinely moving love song from the mawkish "Luliana" and a wistful paean to the past out of "The Old Riverman's Regret." In arranging some songs, like "The Falling of the Pine" and "An Old Timer's Plaint," they use mostly old-time instruments (acoustic guitar, fiddle, banjo, accordion, harmonica, and jew's harp) with a rhythm section. It's a classic folk-rock model and serves them well. But sometimes they surprise us; "Ten Cents at the Gate," itself an unexpected blend of economic protest song and spiritual, mixes in just about every musical sound you might hear in rural Pennsylvania in the last two centuries, including a Bo Diddley beat, a tack piano, oom-pah tubas, barbershop vocals, and a highland bagpipe, and makes it all work as a joyful mashup. The song "Mountain Minstrelsy" finds a gentle, slightly psychedelic vibe, possibly inspired by the song's central image of the firefly as a wandering lumberjack "with his headlight on behind." On the other end of the spectrum, "Sing! O Muse of the Mountain" begins with a simple grunge groove but builds in intensity to become a classic rock anthem. The singing and playing isn't the kind of virtuoso picking you find on some bluegrass and old-time albums, but it's engaging and musical and fits the songs well, making for an unusually engaging and enjoyable album. One decision I question is the shouted vocals by child prodigy Gus Tritsch on two songs--they're more attitude than execution, so they come off more as novelties than real interpretations. But Gus makes up for it with great fiddling, as you'll see in the video below:

Quick quiz: what London band calls itself metal, doom, folk, hardcore, punk, and sludgecore, and has perhaps the spookiest name in music? It's Crumbling Ghost, whose second CD, II, stares out at you with a cool Green Man on the cover. As both the name and the artwork suggest, Crumbling Ghost seeks out the element of Gothic horror already present in folk music and brings it to the fore with noise-drenched, unsettling, atmospheric rock. They understand better than most folk groups that arrangements can be used to further the stories told in the songs. The beginning of "Poor Murdered Woman," for example, backs Kate Harnett's vulnerable vocal with gentle acoustic guitar, reflecting the seemingly pastoral world of "Yanky the Squire," who rides out hunting only to find an unknown dead body. From there, the singing becomes increasingly dramatic, and rock elements enter the arrangement, which culminates in chords thick with distortion, reflecting the alienation of the victim revealed in the final lines:

No mother, no father, no friend I am told
Came to see this poor creature laid under the mould

"Reynardine" keeps a low profile for longer, sounding like an homage to Fairport Convention's version (albeit with a stronger use of the rhythm section), up until the moment the unnamed young woman asks the protagonist's name. At this point, choppy chords warn her of his supernatural nature...but it's too late, and a full-on noise assault tells us that evil is winning the day just as the song lyrics reveal that she is hopelessly hypnotized. Meanwhile, the Methodist hymn "The Good Old Way" is entirely overlaid with distortion, which brings to the fore the desperate struggle against evil described in the song:

Though Satan may his powers employ
Our happiness for to destroy
Yet never fear, we'll win the day
By marching in the good old way 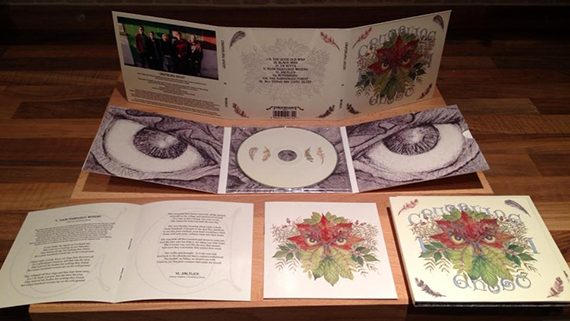 About half the pieces are instrumentals. One of these is the traditional Renaissance dance "La Rotta," familiar from John Renbourn and other guitarists, and the rest are original. Like the songs, they're part folky pastoral and part disturbing doom-metal, all of it deployed with intelligence. The album has informative liner notes on the traditional songs. The one on "Reynardine" draws from the Wikipedia article on the song, which in turn is based largely on my own research; it's the first time I've seen my own work come back to me in a band's liner notes...which is just another reason to enjoy this album!

I encountered Crumbling Ghost when I was looking for a version of the murder ballad "Omie Wise" for a previous blog post. That song was on the band's first album, which is more heavily instrumental, and more heavily original, with three traditional pieces among its ten tracks. It's worth seeking out, though, for its hard-edged mix of idyll and evil.

If you followed the French folk-rock scene in the 1970s, certain names were inescapable: Malicorne, La Bamboche, Melusine, and the Breton groups like Alan Stivell and Tri Yann. But there were other players too, that never became as famous, including Sourdeline. The band's primary influences included the English band Pentangle and the whole French folk scene, as well as Donovan and dabs of early music and psychedelic rock. They toured throughout the 1970s, released two albums, La Reine Blanche and Jeanne D'Aymé, and called it a day in about 1980. Thirty years later, the American psych-folk band Fern Knight convinced Guerssen Records to reissue the Sourdeline albums on LP and CD. The natural next step was for the group to create a third album. This has now come to fruition, with a lineup consisting of the original nucleus of the group, JP Danielsen (guitar, mandocello, vocal) and Catherine Burban (vocal, dulcimer, bowed psaltery), along with guests including their son Dorian Danielsen (percussion), and members of Fern Knight: Margaret Ayre (vocal, cello), Jim Ayre (percussion), and James Wolf (violin). 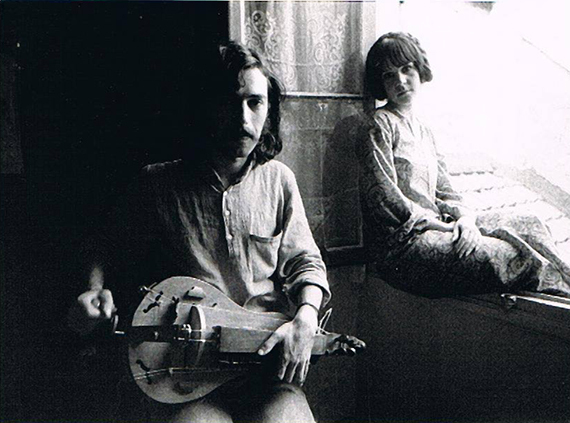 Sourdeline principals JP Danielsen and Catherine Burban in 1974. Used by permission of Sourdeline.

The repertoire on Sourdeline & Friends consists of a few Sourdeline classics and six songs new to the group. In its conception, its repertoire, and its execution, it can't help reminding me of the classic album Pierre de Grenoble, which sparked a significant phase of the French folk scene. Sourdeline & Friends even includes the title song, "Pierre de Grenoble." Other folksongs include "Le Bouvier" (a French translation of an Occitan song, now well known in both languages), and my favorite, "Rossignol du Bois Qui Chante," here given a gentle but robust arrangement on which Wolf's violin and Danielsen's guitar weave around one another, propelled by gentle but insistent percussion, creating a frame for Burban's charmingly naïve vocal. They also include a lovely version of "Lyke-Wake Dirge," that spooky northern English chant for attending the body while the soul journeys to purgatory, sung by Margaret Ayre with suitable gravitas. Ayre's stately and chilling original song, "White Wolf" begins a medley that also includes "J'ai Vu le Loup." This last, which closes the album, is another iconic French folksong, which tells the tale of a secret gathering of dancing, singing animals. It's usually a simple children's song, but in this context it becomes enigmatic, foreboding, possibly threatening. Equal parts fragile beauty, medieval atmosphere, and 70s nostalgia make this a French folk classic worth seeking out. And with the first limited edition of 100 copies sold out, the time to seek it out is now! That is, right after you watch them in action: