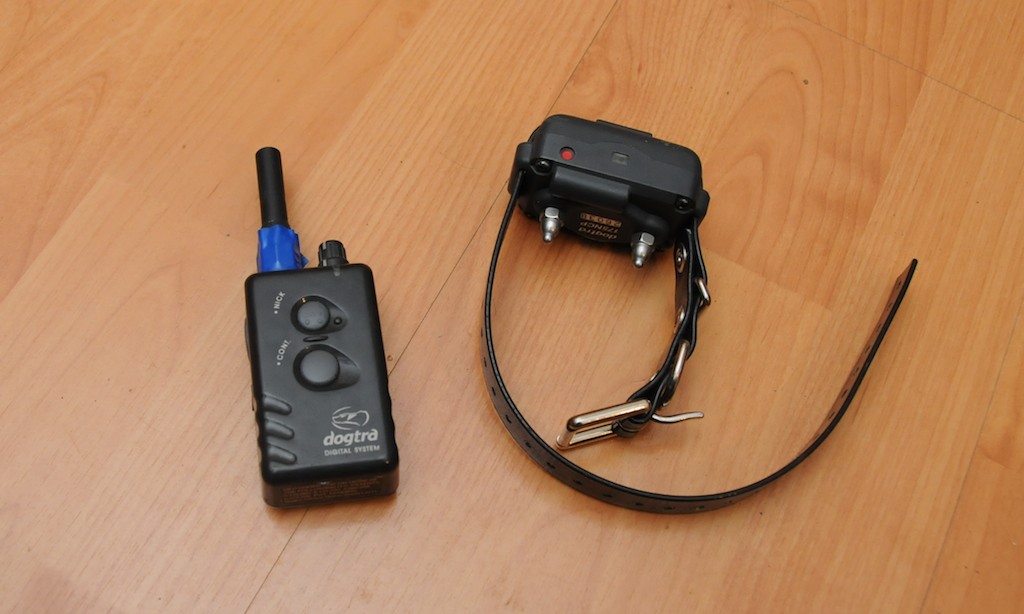 A reader, Donnie Rion of Carl Junction Missouri, recently emailed with the following dilemma, which will be debated in a town council meeting later this week:

The town I live in is looking to revise their leash law to allow dog owners to use electronic leashes to walk their dogs. Are they good enough to physically control dogs in all situations? One reason council is looking into this is that there are people here that have golf carts and they are complaining that its too hard for them to drive their golf carts and hold onto their dog leashes at the same time. They want to be able to use electronic ones so they don't have to hold on to a leash while they drive a golf cart.

What People Think Happens When You Use an Electronic Collar

When people think of electronic leashes -- known more precisely as electronic shock collars -- they imagine their dog trotting next to them in an unerring path as if held in place by an invisible force field. With this "miracle cure" for pulling, or even running away, they envision everything they can do on their walk now that they can safely ignore their dog: listen to the radio, text-message their friends or just power ahead in a daydream state. And even if a squirrel, cat or another dog crosses their path, they imagine that the invisible force field will magically hold the dog by their side.

In the hands of an expert, many dogs can learn to consistently trot by one's side -- even in the face of major distractions. For most owners, however, this is not likely to occur. There are several reasons for this. First, the dog has to be taught to stay next to you -- and do so at all times. For the collar to work, the owner must be able to give the shock right when the dog starts getting ahead, falling behind or walking too far to the side -- even after the dog knows the heel behavior. For instance, if the dog sees a buddy and starts to run off to greet him, the owners must deliver the shock immediately as he starts, not one or two seconds later. That means that the owner must always be holding the electronic collar with finger on the delivery button, or the dog will know that sometimes he has at least two to four second window to do something a human might consider naughty. And if the owner cannot deliver the shock at the very start of the dog's running off, the dog is not learning that running off is the problem. In the dog's mind, he is being punished for whatever he is doing at that exact moment he receives the shock.

Even if the owner is always able to be ready and hold the remote control at all times, there are other factors too. The collar has to be charged similarly to how you'd charge a video camera, and it must be snuggly fit. A loose fit or weak charge results in an unreliable shock. The dog must always wear a real electronic collar, rather than a fake or dummy collar. Dummy collars are often used in place of an actual electronic collar when the owners have two dogs whose behavior needs modifying but they don't want to pay for two electronic collars. Another thing most people don't consider is that all electronic collars are not created equally. Some are poorly built and don't consistently work.

One huge issue, regardless of how careful one is in addressing all of the concerns listed above, is when using the collar, the shock level must be at the right intensity for the dog's level of distraction or the dog's level of excitement. In one situation, a low level shock is appropriate -- just enough to remind him of what happens if he doesn't respond, but not enough to startle, scare or hurt him. A low level may be all that's needed to get the dog to move back by your side. But in another situation, like a squirrel running by, anything short of the "super high" setting and Rover won't even feel it. In fact, even with the collar set to deliver the highest level of shock, some dogs will ignore the pain when they are extremely motivated to perform the undesired behavior.

You can't really solve the problem by keeping the collar on "super high" at all times. If Rover just drifts one step out of place, it's not really fair to give a shock that will make him leap out of his skin. Many owners would hesitate to be so unfair, and they would elect to avoid correcting this little error at all if they only have the option of using a super high level shock. As a result, the dog's grey zone for where he's allowed to be would get wider and wider. Of course, if you have the collar on a level appropriate for correcting small errors and Rover suddenly bee-lines after a deer, your first zap is too low and you then have to adjust the level -- most often with your free hand. That adds two to four seconds, as you try to reach the appropriately high level.

Now let's add into this mix the fact that most dog owners are not dog training experts. So whereas an expert may expect the dog to trot along in a perfect heel position and gives the dog a zap every time the dog surges slightly ahead or falls behind or starts straying to the side, the regular dog owner has shades of grey -- not to mention long periods of mental snoozing on the job. The typical dog owner's criteria for using the collar changes randomly. Their dog runs ahead of them, weaves back and forth or is in the general area, and it's okay at least nine out of 10 times. Then, once in a while, that same behavior earns a zap. It's not unusual that the owner never quite trains their dog what heel position is in the first place. Realistically, if they did, they could just wear a hands-free leash (such as the buddy system). This would tie around their waist, so even when using an electronic collar, the leash would not be an inconvenience at all.

In my experience, about 95 percent of individuals using an electronic collar use it incorrectly or are in a family where at least one of the family members who handles the dog uses it incorrectly. This means that the dog gets mixed signals about what is, or is not, appropriate behavior. I've also seen many people use it to punish their dog for something it did three to five minutes earlier. They are angry, so hit the button while the dog is not engaged in an inappropriate behavior. The dog cannot be expected to learn what is allowed and what is not under these conditions -- which, sadly, are not uncommon.

On top of all of the electronic collar issues, there's one more factor: the golf cart. Even if it's on a bike path without cars and with very low traffic, the driver still needs to be concerned about driving over his own dog. If that is a risk he is willing to take, it may be OK. But dogs-plus-moving-vehicles in the street are generally not a good mix. On leash, you'd have to be careful that the leash doesn't dangle too closely to a wheel and that you don't accidentally pull the dog close enough to be run over. Off leash, on a regular two-way street with regular cars, eventually a town dog will get run over while the owner multitasks -- holding the electronic collar, keeping an eye on the dog and also trying to watch the road. Add the ubiquitous cell phone to the mix, and it's a real recipe for disaster. It's also possible that the dog could help create an accident with another vehicle. So the entire issue of having dogs on electronic collars, in order that they can be exercised next to golf carts on regular residential streets without a leash, is a safety issue for dogs, as well as everyone else on the road. If it's on a bike path with low traffic, the owner needs to decide if the risk of having the dog jump out in front of the golf cart and getting hurt or killed is mitigated by the perceived benefits.

To learn how to run with your dog read, "First Steps on Running With Your Dog"