Now that Big Brother is all up in your cell phone and your email, why not your car, too?

Under a proposal reportedly being considered in South Carolina, metal license plates could be swapped out for electronic ones that would give the DMV or law enforcement agencies the power to broadcast messages directly onto the back of cars.

Such messages could read "Uninsured" or "Suspended" for people who are driving without insurance, or "Stolen" in cases of auto theft.

"We actually put that wording on the license plate across the top and, depending on how the state wants it, it could be in bright red, and we can actually [have the plate] flashing as it goes down the road," Brian Bannister, the co-founder of Compliance Innovations, the company that developed the technology, told CBS local affiliate WSPA-TV.

Bannister sought to reassure WSPA that the plates would not permit the government to track drivers -- unless authorities obtained three court orders: one for his company, one for the DMV and one for the individual carrier.

But the e-plates could come with a few advantages, too.

On its website, Compliance Innovations claims that the digital plates will compel insurance companies to lower premiums for customers, on the theory that the new system will keep uninsured drivers off the road.

The company also says the technology will increase highway safety and decrease DMV walk-ins (something we can certainly get behind.)

If this all sounds like a bad idea, just be thankful the plates don't seem to have flashing neon ads on them -- yet.

Here's an example of what one of the remote-controlled plates would look like: 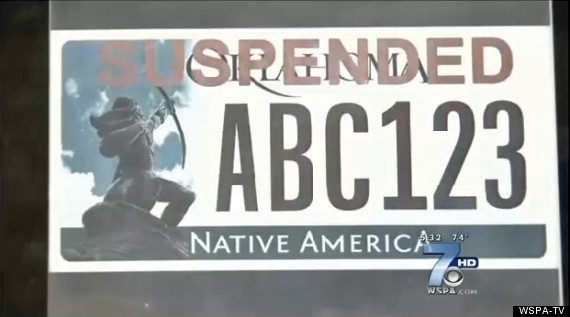 New Electronic License Plates Could Be Controlled By DMV, Law Enforcement Agencies
Future Cars
1 / 11
Google's Self-Driving Car
Google has transformed <a href="https://www.huffpost.com/entry/google-self-driving-car-demo_n_831175" target="_hplink">ordinary Toyota Priuses</a> into hands-free vehicles, each equipped with a rotating camera, sensors and more. <a href="https://www.huffpost.com/entry/google-self-driving-car-demo_n_831175" target="_hplink">According to the AP</a>, the four-wheeled fleet "can steer, stop and start without a human driver." These so-called self-driving cars handle themselves so well that one has even been used to take a blind man for a joy ride (<a href="https://www.huffpost.com/entry/google-self-driving-car-blind-man-taco-bell_n_1387930" target="_hplink">see video above</a>).