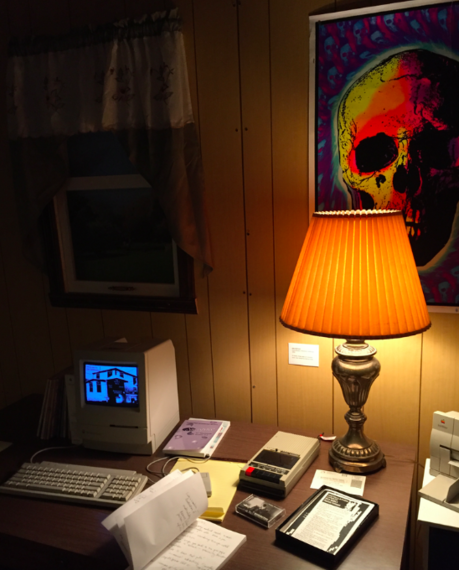 It's not often that I tell people they must go to New Jersey, but the current exhibition "Electronic Literature: A Matter of Bits" at The Stedman Gallery at Rutgers University, Camden offers just that opportunity. Sponsored by the Digital Studies Center and curated by Director Jim Brown and Associate Director Robert Emmons, the exhibition features works drawn mostly from the newly published Electronic Literature Collection, Volume 3. It offers visitors the rare chance to interact with some "classics" of born digital literature including bpnichol's "First Screening" computer poems (1984) and Judy Malloy's hypertext Uncle Roger (1986) as well as a panoply of newer forms that includes a live Twitter feed of bot-authored poems, Caitlin Fisher's trippy Oculus Rift piece, Everyone at This Party is Dead (from the Cardamom of the Dead Series), and Zuzana Husárová and L'ubomir Panák's unsettling Enter:in' Woodies (2011), a work for Kinect.

As the punning title suggests, this thoughtfully installed exhibition is concerned with the interplay between materiality and virtuality, content and form, and meaning and sensory perception. Given the imminent arrival of commercially viable virtual reality and augmented reality, it is not surprising that not only are the ways we think, write, and read changing, but also how we physically interact with computer technologies. One of my favorite examples of this is Amaranth Borsuk and Brad Bouse's Between Page and Screen, a series of poetic letters between two lovers, P. and S., that requires both a paper book printed with glyphic black and white geometric shapes and a computer to be read. Staring into a real-time web camera feed of herself, the user maneuvers the page for the website's augmented reality reader. This is not a simple task. If the page is not in the right position, the letters can appear backward or fall apart before the reader can decipher them. Like love, the piece asks the reader to fit her body onto an other's, in this case, a hybrid of old and new media. Another delightful example is Jose Aburto's "Grita", in which the user must shout into a lit box to make the words of the poem appear on the monitor. As soon as the user stops, the poem disappears. The work makes the user aware of the affective power of her voice. In the hush of the gallery, those unintelligible sounds hang in the air far longer than the text on the screen. 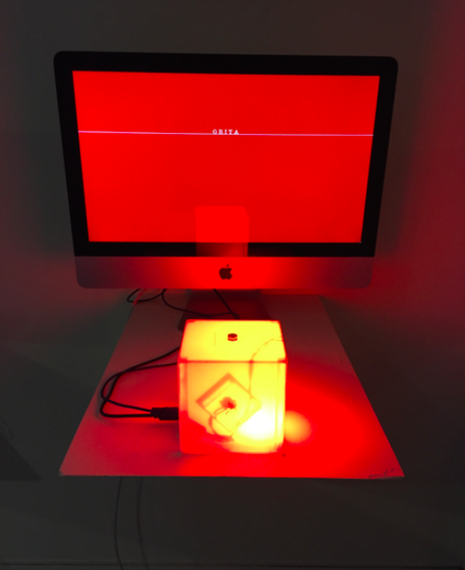 According to philosopher Villem Flusser, it is gesture, a "formal and aesthetic" movement, which translates affective states of mind into symbols. According to Flusser, our gestures are changing. With the growing recognition that there is no "transcendent intellect" or "absolute knowledge," the gesture of searching (for meaning or knowledge) is shifting from "a digging down for reasons" to an examination of aesthetic qualities of things and an exploration of how humans respond to their environment as both subjects and objects. In keeping with this idea, many works in the exhibition privilege the formal qualities of text and language (prosody, the movement and appearance of letters and words across the screen, and simple legibility or lack thereof) over meaning. One of the best is Nick Montfort's generative poem "Taroko Gorge" which, with its open source code, has inspired multiple remixes also on display. With an economy of words, Montfort employs repetition coupled with constant change to mirror the flow of water through the canyon. In this exhibition, the piece is slyly installed as a projection on the floor of the gallery, an intervention which "naturalizes" the original vertical flow of the poem. Another playful example is Jason Lewis and Bruno Nadeau's app- based Poems for Excitable Mobile Media, the P.o.E.M.M Cycle which employs different user gestures to communicate the meaning of the poems. For instance, gently tapping on the screen in the "The World Was White," a poem that intimately describes three-friends' drive through a wintry landscape, causes a word or phrase, in shades ranging from black to light grey, to appear then slowly melt away into the white background.

In addition to works exploring machine-body interface, visitors will also find examples of more conventional computer-based multimedia pieces including my own Queerskins (with Cyril Tsiboulski). The standout is Samantha Gorman and Danny Cannizzaro's app PRY, a lyrically written piece that allows utilizes the iPad's gestures to allow users to look through the main character's eyes and to access the personal "thoughts" of this Gulf War veteran returning home with PTSD. Another interesting piece that combines documentary and fiction is Hazel Smith, Will Luers and Roger Dean's Motions which examines human trafficking. It begins with white text on a black screen: "You are on a train and it is taking you to a destination, but you don't know what that destination is" paired with the sound of airplanes taking off. Luers' images, grainy banal video loops and static images of the everyday, are especially effective in giving users a sense of the un-extraordinary yet highly personal nature of rape and slavery in the global economy. It is only Hazel Smith's erudite voice and overtly poetic language that disrupts the illusion, bringing the user back to the reality that she will likely never be in the position of the nameless person on the train.

Perhaps my favorite piece in the show is John McDaid's Uncle Buddy's Phantom Funhouse (1992). The work, which purports to be the contents of Art "Buddy" Newkirk's literary estate, is creatively installed by Robert Emmons in a mock circa early 1990's study complete with cheap wooden desk, Nirvana poster, floppy disk games and cassette tape recorder. Sitting at the desk, listening to amateur acoustic rock songs from Uncle Buddy's band, The Reptiles, whilst perusing a dizzying array of ephemera archived on the old Mac, I was overcome by a deep affection for this work. Perhaps it was nostalgia, but I felt that something was different about this D.I.Y. mess of a project-- it just seemed so wonderfully human.

The exhibition "Electronic Literature: A Matter of Bits" runs through April 21st at the Stedman Gallery at Rutgers University in Camden, NJ.