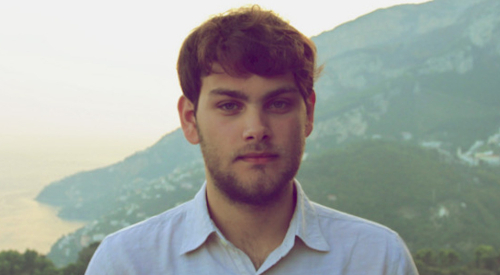 There's an emotive vivaciousness about the music of Mike Greene, better known as Fort Romeau. Still a fresh face in the electronic music realms, the London-based DJ-producer is an old soul when it comes to the passion behind his music endeavors. Crushing the constraints of techno and house music, Greene has a free-flowing air about his music that belongs to the world.

A few years ago, Greene caught the ear of Ghostly International head Sam Valenti IV and would soon enough release a few singles, EPs, and remixes on the famed label. Just recently, along with remixes for the likes of Tony Allen and Andreya Triana, Greene released his second full length Fort Romeau album Insides (the first being Kingdoms via 100 percent Silk in 2012) on Ghostly.

I was able to chat with Mike Greene while he was back at home in the United Kingdom about working with Ghostly International and about some of the inner workings of his music and electronic music in general.

How did you first link up with Ghostly International?
Basically, Sam [Valenti IV] emailed me in the end of 2012 after my first record and asked me to do a remix for Beacon, and just from there, he just asked me if I wanted to do a record with them. So I did a single, then he said "Do you want to do an album?" I said "Yeah, why not?"

What was it about Ghostly that made you want to work with them?
It was mainly just Sam. I just sort of bonded with him and just liked his attitude and his vibe really. I liked how Ghostly doesn't really have a particular sound, if you look at all the different artists. There might be a few things that relate to one another, but generally speaking, they're quite different sounding artists. In my head, Ghostly is like a good art gallery with huge space that lets the artists work shine in which ever way its appropriate for the work, rather than all of the music going through a particular prism.

What sort of sound were you going for with your new album Insides?
It's a development from my first record. It's really just a case of playing and DJing a lot more and looking for records to play and also consuming records generally. Consuming music, more variety. It's a broader scope away from the house and disco type influences I already have but taking in more things from like krautrock or '70s experimental music and '80s new wave and even EDM. It's all trickling into it somehow.

You seem to have comfort zone about how you present your music, like when you DJ you want to let the music consume you.
I think DJing is more about the crowd than it is about you. Generally, the idea is that people are focused on the music in the club less so than watching somebody do a performance. I like that aspect of it. I'm not really interested in the "DJ as performer" as so much. Obviously, you're DJing, it's your selection, your presenting music to people, but at the same time, you have to be conscious of what's going on in the room of the particular atmosphere of the night. You have to take all these variables and they modulate your set. I wouldn't say it's like an insular thing at all, because if you turn up and play whatever, it's not necessarily going to be appropriate.

What sort of a kid were you growing up?
Pretty insular. I played a lot of computer games and didn't have that many friends at first. I wasn't a very social person. Realistically, I don't think I am a very social person. I just went from one thing to another, so when I was a kid, it was music and video games. That was it until I got to like 21-22, then I got bored of computer games mostly and just concentrated on music. I've always been obsessive. I don't know if obsessive is the word because I wouldn't call myself a collector. I'm not a record collector. I'm passionate about records and playing records, but I'm not a collector. I'm not bothered about getting the first pressing of things. That's not interesting to me. I'm quite single-minded in terms of if I have any time that I'm working, the only things I really do is go out to eat and drink.

Do you think electronic music artists take themselves too seriously?
I suppose, but I think music in general takes itself very seriously. Obviously, there are exceptions. I'm talking about the mainstream. People like themselves so seriously. Like get a fucking grip. I think there's a difference. I think there is an important distinction between taking the work seriously and taking yourself too seriously. It's a real disaster for anybody to take themselves too seriously, but obviously you have to take the work seriously or it's not worth doing. Those two things are not mutually exclusive. There's a fundamental issue with music journalism and the fact that it's talking about music. It's such an abstraction. That's why I find reviews so whimsical. When we think about it, what can a piece of writing about music make you understand it? Apart from giving you specific factual things, but when it comes to discerning the essence or the elements of the music, it cannot be described.

In comparison to artists of other genres, there is a certain difference in covering electronic music. No matter how much you are out there in public, its still kind of a faceless genre.
Also, it's just a bunch of fucking geeks at the end of the day. There's so much shit you have to learn how to do. Most of its boring. It's not like you're going to start a metal band so all the girls will fancy you, and you have four to five other people to lean on. It's a different beast. And being in a band is essentially a social endeavor, often it ends in disaster. You do have to be able to organize to all meet in the same place long enough to write a song. Whereas with electronic music, 90 percent of the time it's the absolute opposite; you want to be on your own with no one around to hear what you're doing. There are so many different processes you have to learn. I'm sure that other music encompasses so much electronic elements into it that it's changing. But traditionally speaking, you have so many different roles you have to fulfill, whereas in a band, you have your instrument and maybe you help with some arranging and do more parts than others. It's different endeavor. To get any good at it, you have be a bit obsessive and you have to be a bit insular. If you're going out partying and socializing everyday, you're not going to learn how to program some fucking stupid modular synths that takes 16 weeks to get an unusable sound out of.