Some people with moderate-to-severe sleep apnea could soon have an additional treatment option for their sleep disorder.

A new study published today in the New England Journal of Medicine detailed the results of a phase III trial testing the safety and efficacy of mild electronic stimulation therapy for treating obstructive sleep apnea. The trial showed that the treatment method was effective at reducing the effects of sleep apnea.

The method involves surgically implanting a device, called Inspire Upper Airway Stimulation therapy, that stimulates the hypoglossal nerve (which leads to the tongue muscle). This stimulation increases muscle tone, which in turn activates the tongue muscle to open up the airway.

Obstructive sleep apnea occurs when there is obstruction of the airway during sleep, leading to pauses in breathing that cause disrupted sleep and, thus, daytime fatigue.

The mild electronic stimulation therapy method is different from other currently available sleep apnea treatment options. One option, continuous positive airway pressure (CPAP), works by pressurizing the upper airway to keep the airway open -- this is considered the gold standard of treatment for obstructive sleep apnea because "no matter where there's airway collapsibility, if a seal is properly attained, you're going to get the airway open during sleep," Strollo said. Another treatment option is oral appliance therapy, which is when the lower jaw is actually moved forward to mechanically open the airway. This new treatment, however, is the first to involve electrical stimulation to stimulate the muscles. 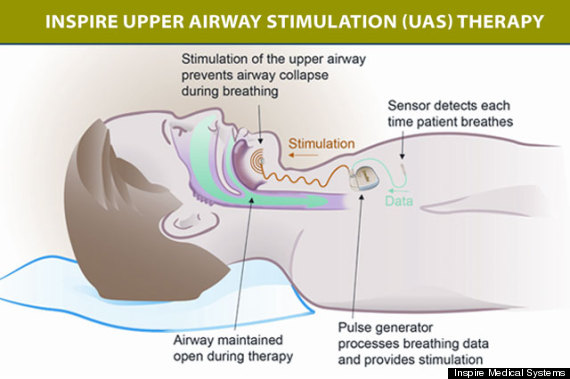 However, the lead author of the study, Dr. Patrick J. Strollo, M.D., director of the Sleep Medicine Center at the University of Pittsburgh Medical Center, explained to HuffPost that CPAP should still be considered the best treatment option for people with sleep apnea, and this method will likely not replace CPAP anytime soon.

The new method "is not for everybody, and the gold standard for treatment for moderate to severe sleep apnea is still CPAP," said Strollo, who is also a professor of medicine and clinical and translational science at UPMC. "But there are clearly patients out there who are struggling for alternatives, who cannot tolerate positive pressure."

Strollo explained that the participants of this study -- 126 in total, 83 percent of them men, recruited across 22 sites around the country -- were carefully selected based on certain criteria.

"We intentionally recruited people who could not tolerate positive pressure -- this is a group of patients who are very vulnerable for health outcomes left untreated," Strollo said. Other requirements for enrollment in the study included having moderate to severe sleep apnea, having a body mass index less than 32, having moderate to moderately severe apneas (pauses in breathing), and having signs that the cause of their sleep apnea is related to obstruction at the level of the tongue.

After 12 months of the therapy, researchers saw a 68 percent decrease in apnea-hypopnea index score and a 70 percent increase in oxygen desaturation index score.

Strollo noted that some participants reported pain and/or discomfort after the surgery to implant the device, which is common after an operation, but he said that the pain level was nowhere near that which is commonly reported after upper airway surgery. In addition, researchers did not find evidence that the device led to any long-standing problems with the tongue (aside from some instances of tongue weakness immediately after the implantation). Strollo also noted that all patients had the device implanted by a team made up of a sleep doctor and an otolaryngologist -- and that it was not difficult to sufficiently train otolaryngologists to effectively perform the implantation.

While the study was funded by Inspire Medical Systems, Strollo said that an independent statistician reviewed the data. Next, the researchers will have a formal panel meeting with the Food and Drug Administration, where they'll make a decision about how to proceed with further trials.