The world as we knew it is slipping away. Last week, the last roll of Kodachrome came out of a laboratory in Parsons, Kansas, 13 months after the Eastman Kodak Company announced that it would no longer manufacture the iconic film. 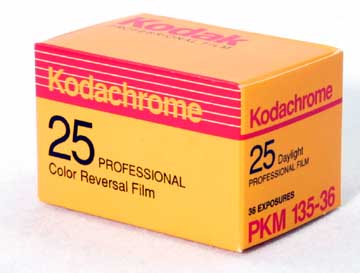 Kodak introduced Kodachrome in 1935. It was the world's first, and for a while, only, color film. The original Kodachrome had an ASA rating of 6. That's why the film "Makes you think all the world's a sunny day": one needed a tripod for the 1/5th of a second exposure with full depth of field (f/16). But the results were spectacular: detailed, fine-grained images with true, vivid colors.

Over the years, Kodak increased the speed of the film, first to ASA 12, and then, with Kodachrome II to ASA 25. That film allowed one to use 1/25th of a second as the shutter speed, good enough for hand-held shots if you were very steady. It was the "great occasion" film of my childhood -- meaning it was the film of choice for outdoor birthday parties and summer vacations. By my early teens, Kodak came out with Kodachrome 64. But we preferred Kodachrome II for the finer grain.

Not only was Kodachrome slow to shoot, it was slow to process. Only a professional laboratory could handle it. Even growing up in film-obsessed Los Angeles, it took a week to get the pictures back.

Dedicated amateur photographers could process other color films at home. It took many steps, many hours and harrowingly precise temperature control. The only reason one could process other color film at home was that the manufacturer put the color dyes in the film. Kodachrome came without dyes; they had to be added during processing, and that could only be done in a laboratory too complex to duplicate at home. But it gave Kodak greater flexibility to chose dyes that did not have to be compatible with all the other processing steps.

Kodak used that freedom to chose dyes that were more realistic and longer lasting. The red dye has long since faded to oblivion from every Ektachrome slide and many Kodacolor prints. But a Kodachrome slide is still as vivid now as the day it came back from the lab. That's how the "nice bright colors... the greens of summers" of the Paul Simon song came to be.

Over the years, digital photography took over. Digital sensors have become faster than film, and have greater dynamic range (ability to respond to both bright and dim light in the same scene). For years, film still had better resolution than digital. But advancing microelectronic manufacturing processes led to higher and higher resolution (more megapixels), until now even the old curmudgeons admit that the latest digital cameras rival the best of the old films.

Digital photography eliminates the delay and cost of film. Kodachrome worked out to about $0.50 per shot for the film and processing -- whether the shot was a National Geographic cover or a total waste -- and it was over a week from taking the shot to seeing the processed image. Digital images are essentially free. The camera's memory card can hold hundreds of images, and they can be uploaded to a computer than can cheaply store millions of images.

Digital images are much easier to manipulate. Cropping, re-sizing and special effects that used to take hours in the darkroom take seconds on the computer screen. And with Kodachrome, you couldn't do any image manipulation: It had to be exactly right on the film.

Digital images are much easier to disseminate and share. The only reasonable way to share a Kodachrome image was to darken a room, set up a screen and turn on a projector. To make a hard copy (print), the lab first had to make a color "inter-negative" and then make a print from the inter-negative. The process was even longer and more expensive than ordinary color print or slide work.

With digital cameras, even amateurs can take dozens of shots to get the "just right" picture. So even the family snapshot is better, because the images that were not properly composed, properly lit, properly exposed or properly posed get deleted or ignored. Digital increased artistic standards not only for professionals, but for all of us.

Kodachrome is part of our history, part of the fabric of our culture, still vividly coloring the dreams of our collective memory. But it is gone from our life.