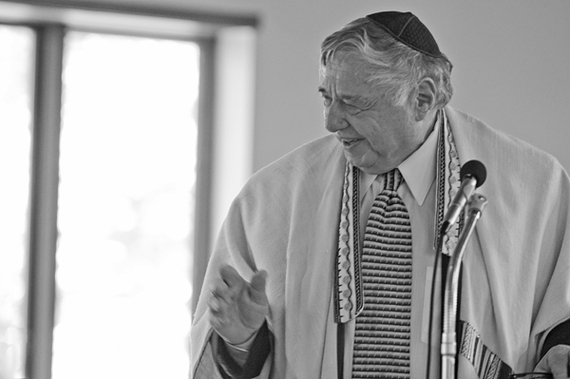 When I was in my twenties and thirties, I did not expect to ever want or need a rabbi in my life again. After years of defending my Jewish identity as the child of an interfaith family, I thought I was done with Jewish institutions and clergy. I joined a community created by and for interfaith families, filled with families that spurned religious dogma, labels, and litmus tests. And I was happy.

And then, Rabbi Harold Saul White swept into my life, like some kind of mystical wind, simultaneously fresh and ancient, revealing a new way to connect back to Judaism. Here was a rabbi so radical, so confident, that he was willing to become the spiritual advisor of a community of interfaith families--and share leadership of this interfaith community with Reverend Julia Jarvis. He worked with ministers and priests, marrying generations of interfaith couples, and welcoming their babies, and helping their children come of age, and conducting their funerals.

Rabbi White helped families to see Judaism as inclusive rather than exclusive, decades before most other rabbis understood the importance of this work. This rabbi, who was already old and wise in years when I met him, but perennially young in his iconoclastic spirit, convinced me that I still needed a rabbi as a counselor and friend. He restored my confidence in the idea that a rabbi could be relevant, even essential, to interfaith families like mine.

In his final decade, as Spiritual Advisor to the Interfaith Families Project of Greater Washington, Rabbi White preached most weeks at our Gatherings, lavishing on us his tremendous erudition, based on his studies with Abraham Joshua Heschel and Martin Buber and Mordecai Kaplan, and on his forty years as the Jewish chaplain at Georgetown University, and on his work in the Civil Rights movement. He gave brilliant sermons on the Days of Awe and Sukkoth, on Passover, on Shavuot. And he gave brilliant sermons on the Jewish roots and resonance of Advent and Christmas, Lent and Easter.

My family was blessed to have Rabbi White co-officiate with Reverend Jarvis at the interfaith bar mitzvah ceremonies of both of my children, now 21 and 18. I realize that for many people in the Jewish community, that sentence reads like shocking gibberish. But we could always count on Rabbi White to be more revolutionary, more deeply ecumenical, than any of the rest of us. As an illustration of this, when planning my son's bar mitzvah, we had the following conversation:

Me: "So we will have the Torah portion. We want to also acknowledge the Christianity in our extended family, but I don't know about reading from the New Testament. I think that would be beyond the pale. What do you think, rabbi?"

Rabbi White, "Ah, but I think we should include the reading from the Gospel of Mark, where Jesus is coming of age, getting quizzed by his teachers about the commandments, finding his Jewish voice, as if he's at his own bar mitzvah. It's a perfect reading for this occasion!"

In his last years, Rabbi White had an octogenarian exterior and the wild soul of a youth. He impressed my teenagers by wearing his black velvet opera cape on Halloween and Purim, and bragging about traveling the world, and staying up all night at parties. When my son had trouble relating to his Torah portion from Leviticus, Rabbi White completely re-framed the text for him as a compelling call to environmentalism. He was honest with young people about his own atheism in adolescence, and his longstanding contempt for most institutions. And when he retired from us last spring, we threw an ecstatic second bar mitzvah celebration for him, featuring his favorite Catholic gospel choir.

Like so many others, I cherished this singular and compassionate man. When he was laid up, I brought him matzoh ball soup and admired his beloved cats. I nominated him for the Forward's list of Most Inspiring Rabbis. And over the past two years, as I traveled the country to speak about Being Both: Embracing Two Religions in One Interfaith Family, I had the privilege of appearing alongside Rabbi White, who is featured in the book, and who was happy to serve as my occasional wingman (or was I his?). At the book launch at Politics & Prose, he wore a bow tie and told stories from his life, lending his authority and experience. And when I was invited to speak to fifty rabbis on retreat-an intimidating prospect-Rabbi White went with me and we presented our work in conversation with each other.

Through Rabbi White, I allowed the possibility of rabbis back into my life. I am radically amazed to realize that I now have a whole posse of rabbis I can call friends, advisors, and colleagues. They include Orthodox, Conservative, Reform, Reconstructionist, Humanistic, Jewish Renewal, and post-denominational rabbis, all seeking to help interfaith families stay connected to Judaism (whether or not those families also stay connected to other religions).

I am launching my son and daughter out into a world filled with rabbis who will embrace them as they are. But my children will always carry with them the great blessing of the memory of their first rabbi, the one who paved the way for all those other rabbis, the one who can never truly be replaced: Rabbi Harold Saul White.