Scientists in Japan think they've finally created the elusive element 113, one of the missing items on the periodic table of elements.

Element 113 is an atom with 113 protons in its nucleus — a type of matter that must be created inside a laboratory because it is not found naturally on Earth. Heavier and heavier synthetic elements have been created over the years, with the most massive one being element 118, temporarily named ununoctium.

But element 113 has been stubbornly hard to create. After years of trying, researchers at the RIKEN Nishina Center for Accelerator-Based Science in Japan said today (Sept. 26) they finally did so. On Aug. 12, the unstable element was formed and quickly decayed, leaving the team with data to cite as proof of the accomplishment.

"For over nine years, we have been searching for data conclusively identifying element 113, and now that at last we have it, it feels like a great weight has been lifted from our shoulders," Kosuke Morita, leader of the research group, said in a statement. [Graphic: Nature's Tiniest Particles Explained]

If confirmed, the achievement will mark the first time Japan has discovered a new element, and should make Japan the first Asian country with naming rights to a member of the periodic table. Until now, only scientists in the United States, Russia and Germany have had that chance.

"I would like to thank all the researchers and staff involved in this momentous result, who persevered with the belief that one day 113 would be ours," Morita said. "For our next challenge, we look to the uncharted territory of element 119 and beyond."

Scientists are continually trying to create bigger and bigger atoms, both for the joy of discovery and for the knowledge these new elements can offer about how atoms work.

Most things in the universe are made of very simple elements, such as hydrogen (which has one proton), carbon (six) and oxygen (eight). For each proton, atoms generally have roughly the same number of neutrons and electrons. Yet the more protons and neutrons that are packed into an atom's nucleus, the more unstable the atom can become. Scientists wonder if there is a limit to how large atoms can be.

The first synthetic element was created in 1940, and so far 20 different elements have been made. All of these are unstable and many last only seconds before breaking apart into smaller elements. 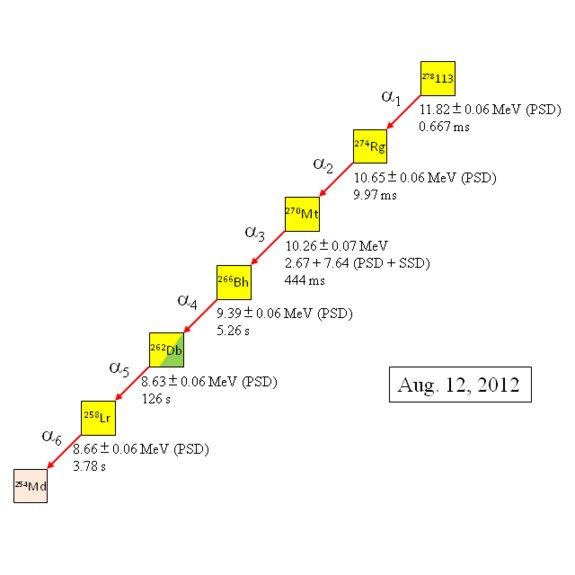 To synthesize element 113, Morita and his team collided zinc nuclei (with 30 protons each) into a thin layer of bismuth (which contains 83 protons). When 113 was created, it quickly decayed by shedding alpha particles, which consist of two protons and two neutrons each. This process happened six times, turning element 113 into element 111, then 109, 107, 105, 103 and finally, element 101, Mendelevium (also a synthetic element).

Morita's group seemed to create element 113 in experiments conducted in 2004 and 2005, but the complete decay chain was not observed, so the discovery couldn't be confirmed. Now that this specific pattern resulting in Mendelevium has been seen, the scientists say it "provides unambiguous proof that element 113 is the origin of the chain."