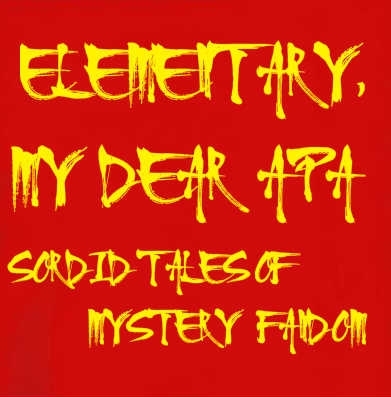 Back in the prehistoric times before the Internet - when dinosaurs roamed the earth, the West was wild and the East was still the mysterious Orient - mystery fandom wasn't a simple matter of keeping abreast of daily blog updates and Yahoo group digests...it had to be earned.

In 1973, DAPA-EM (which stood for Elementary, My Dear APA - don't ask, because I don't know the origin of the name) became the first and only APA (Amateur Press Association) devoted to the mystery genre.

APAs are limited membership groups whose members produce copies of their amateur magazines, which are then sent to an Official Editor. The Official Editor then collates the magazines, mails them to the members, keeps track of the APA's finances (dues to cover mailing expenses), maintains a waiting list of contributors, and makes sure current contributors meet the requirements for minimum activity - which in the case of DAPA-EM was four pages of mystery related information or research (three of which had to be original material) every four months. Since issues were gathered and sent out every two months, a contributor could miss only one issue before facing an inactivity deadline.

This was hardcore, chisel and stone, tape and paste, mimeograph machine, surreptitious Xeroxing at work, seat of the pants publishing...and it was probably the most fun I've ever had in the mystery genre.

DAPA-EM was originally founded with six contributors. By the time I joined in the late 70's, DAPA-EM was up to its limit of thirty-five members with a half-a-dozen names on the waiting list. For a number of years, I published my contribution, The Thieftaker Journals (later renamed Brass Knuckles), full of reviews and explorations of - mostly - hardboiled detective fiction. In my November, 1983, issue, I even had the honor of publishing a controversial story, The Oldest Killer, by Edgar Award winning author Dennis Lynds, which went on to much acclaim and cemented a friendship of many years.

Critical appreciation of the mystery genre was in its infancy during the early days of DAPA-EM. Several mystery newsletters, including Marv Lachman's The Mystery Lover's Newsletter and Al Hubin's Armchair Detective had laid the groundwork for DAPA-EM, but the pivotal works of the genre were still on the horizon. The first of these works to have lasting impact (and still sits in a place of honor on my bookshelves - as do the others) was the Encyclopedia of Mystery & Detection by Chris Steinbrunner and Otto Penzler (who has now become the acknowledged professor emeritus of mystery research and criticism). Al Hubin's ambitious Bibliography of Crime Fiction followed in 1978, and John M. Reilly's epic Twentieth Century Crime and Mystery Writers came two years later in 1980. But before all these, there was the collaboration that was DAPA-EM. And what a collaboration it was. Members of DAPA-EM spanned America, with submissions also coming from Canada, Australia, and England. At the height of DAPA-EM's existence, it was not unusual for two-thirds of the membership to show up, live and in person (except for George Kelley - an inside DAPA-EM joke), at the yearly Bouchercon mystery convention. There is no longer a DAPA-EM wild party room set aside in the convention hotel (we still can't talk about some of the scandals), but just last year, I attended the 44th incarnation of Bouchercon in Long Beach where I crossed paths with several long time DAPA-EM friends.

While the reviews and articles, which made up the bulk of most DAPA-EM entries, were interesting, it was the exchanges in the letter pages where gold and friendship was to be found. Here tales of booking experiences, convention antics, personal travels, and personal lives abounded - much in the same way the connections made in the Campfire section of the revered pulp Adventure raised that magazine to a level of reader connection above all others.

DAPA-EM contributors were a family and, like any such grouping, there were dysfunctions and arguments - both personal and literary. Sometimes, it could get ugly, and once or twice the heat from the pages could be felt through the mailing envelope. Rabid Mets fans and baseball had nothing on the contributors of DAPA-EM and the mystery genre.

Those upsets, however, were minor glitches now lost to the winds of time. More importantly, through the pages of DAPA-EM, I established cherished friendships, acquaintances, and contacts, which have continued across the decades and are still viable today. A number of DAPA-EM contributors are no longer with us, and while I may only hear occasionally - usually through the wonders of Facebook - from my buddies, including Bill Crider, Cap'n Bob Napier, Art Scott, and others still on this side of the sod, those early days of writing, publishing, and sharing of our love for the mystery genre still bind us together.

Every two months when my copies of the magazines bound into DAPA-EM arrived in my mailbox - usually after a frantic rush to get my own entry finished, collated, and submitted - I knew I was in for hours of enjoyment, spending time learning about new books and writers in the genre I loved, and catching up with thirty-four of my best friends in the world of mystery - many of whom have gone on to successful writing careers.

Work and commitment are needed to keep up with a semi-monthly publishing schedule of even a small publication. Original research and writing had to be done aside from the dexterity needed with glue sticks and those old fashioned things called typewriters. DAPA-EM not only represented the best of the mystery genre, it also represented a massive collective effort on the part of its contributors.

In February 2011, after 216 issues, DAPA-EM gave up the ghost to the siren call of blogs and social networking. I love physical books, but I've shifted to mostly (only mostly) e-books with ease. However, I still miss DAPA-EM, the work it entailed and the never to be had again rewards it provided. I recently read through some old issues and marveled and the breadth of knowledge still contained there.

What do you say, Bill...Art...are any of us crazy enough to resurrect DAPA-EM for a final retrospective/tribute issue? Just kidding - seriously, just kidding...