On the cover of Elena Ferrante’s highly anticipated upcoming book Frantumaglia, which translates to “self-portrait,” a young woman crouches beneath the window of a dilapidated house, her body cloaked in shards of wallpaper, peeled off into fragments, as flimsy as crepe paper.

It’s rare to encounter a wall, often understood as a rigid barrier more than a physical thing, in such a fragile state ― so easily broken, worn like a cloth.

The image is the work of Francesca Woodman, an iconic photographer who took her own life at 22 years old, when she jumped out of a window. It’s Woodman pictured in the photo, her figure blurred like a signature that’s not-so accidentally been smudged. The piece is a self-portrait, though Woodman’s image is purposefully and exquisitely obscured, her boundaries dissolved as if her body were spun of cotton candy instead of flesh.

Woodman’s image is a perfect foil to Ferrante’s words, as both women thoughtfully navigate the space between absence and presence, fame and anonymity.

Ferrante, for example, published her wildly beloved four-part Neapolitan Series under a pseudonym, preferring to keep her identity anonymous. In a variety of interviews, Ferrante expressed her belief that the self-promotion required by artists and creators today ends up diminishing the power of their work. Stemming from a “desire for intangibility,” Ferrante opted to evaporate behind her richly textured characters and stories, which took on lives of their own.

Of course, her clearly stated desire was denied recently when Italian journalist Claudio Gatti outed Ferrante in the New York Review of Books, claiming that, because the author admitted to “lying on occasion,” she “relinquished her right to disappear behind her books and let them live and grow while their author remained unknown.”

With his unwarranted and unwanted investigation, Gatti stripped Ferrante of her ability to hide in plain sight, as if the wall that once protected her was unceremoniously ripped down, haphazardly used to cover her exposed parts.

Woodman’s self-portraits also illustrate the intangible, depicting the moment when the delineated self gives way to something abstract and incorporeal. A body turned spirit, angel, or stain.

In her black-and-white images, which she referred to as “ghost pictures,” Woodman’s edges disintegrate, due to a skilled combination of long exposure shots, movement and time. If Ferrante sought to exist only in words and not in person, Woodman similarly strove to be only image.

“I finally managed to try to do away with myself, as neatly and concisely as possible,” Woodman wrote in a note that accompanied an attempted suicide in 1980. The sentiment is eerily reminiscent of Ferrante character Lina Cerullo, who, in the prologue of My Brilliant Friend, disappears of her own volition without a trace, even cutting her image out of family photographs.

“She wanted not only to disappear herself, now, at the age of sixty-six,” her best friend Elena writes upon hearing the news, “but also to eliminate the entire life that she had left behind.” Determined not to let her win, Elena then begins writing the story of their lives, working to undo Lina’s absence. Woodman embodies elements of both Elena and Lina, the will to document her life and the desire to vanish from it.

Elena’s entire series, then, is an attempt to, through writing, provide Lina with, as she describes it, “a form whose boundaries won’t dissolve.” Woodman’s photographs, however, suggest such a thing is impossible.

Another place Woodman and Ferrante overlap is in the spaces they occupy. Woodman’s photos are set in domestic environments, though through her lens they appear more like elaborate traps or haunted houses. Visualizing the way women often feel trapped within the confines of their homes, Woodman renders herself in uncomfortable conversations with decaying interiors that resemble crumbling ancient ruins, often threatening to swallow her whole.

Ferrante’s world is Naples, Italy, a space which she skillfully renders in the reader’s imagination as seedy, dangerous, and in disrepair. Also, in a way, a trap, as it constantly pulls Lina and Elena back like a magnet, no matter how much the two change, succeed or pull away.

Throughout the four novels, the two women move through various homes in and out of Naples, yet both end up, in the final book, inhabiting shabby Naples apartments that feel as if they could be straight from a Woodman backdrop.

Many have posthumously dubbed Woodman a feminist artist, specifically because of her ability to evade the male gaze, even when depicting herself nude. She accomplishes this through changing form, from an object to be fetishized to a specter that cannot be fully grasped. Perhaps, her photos suggest, the only way a woman’s body can avoid male consumption is to obscure itself beyond easy recognition.

Similarly, Ferrante has worked to approach writing in a distinctly feminine mode, as expressed explicitly by her character Elena. The author, who too uses mystery as a form of armor, is all too aware that she’s working in a field permeated and controlled by men.

As she writes in Frantumaglia: “We accept that our need for fulfillment in this or that field should be ratified by men in authority, who co-opt us after having evaluated whether we have sufficiently absorbed the male tradition and are able to become its dignified interpreters, free of female issues and weaknesses.” Ferrante’s attempts to obscure her own self, however, thanks to Gatti’s intervention, were denied.

Both Woodman and Ferrante create self-portraits that hide as much as they reveal. While one worked primarily in the realm of image, the other text, both were conscious of how quickly your art, your words, your identity, your body, and your edges can be stripped away ― if you are a woman.

Both were determined to live and work on their own terms, even if that meant erasing themselves before someone else could. This, perhaps, is what makes Ferrante’s outing so heartbreaking and frightening to the women who read and loved her. To learn all her attempts to shield herself were for naught.

I haven’t read Frantumaglia yet, but, damn, the cover is powerful in itself. 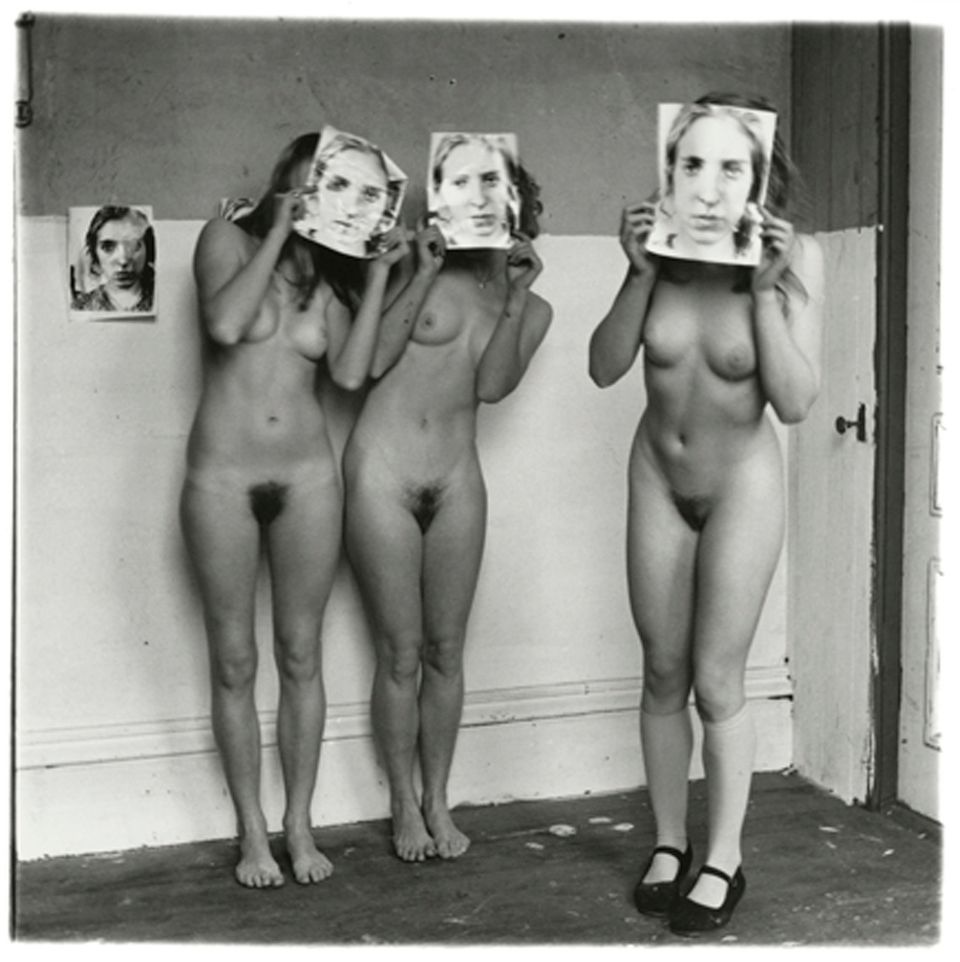