If a police car wasn't parked outside its entrance, you’d hardly be able to guess that there’s a refugee camp in this Athens neighborhood. Parked trucks and junk yards surround the campsite, which had been empty until recently. A wall and a sliding door prevent anyone from looking inside. It is absolutely quiet -- very few sounds come from the camp.

We enter the enclosure with a small group of Afghan refugees. The only documentation they are required to show to get in are the temporary residence cards they received upon arriving in Greece. 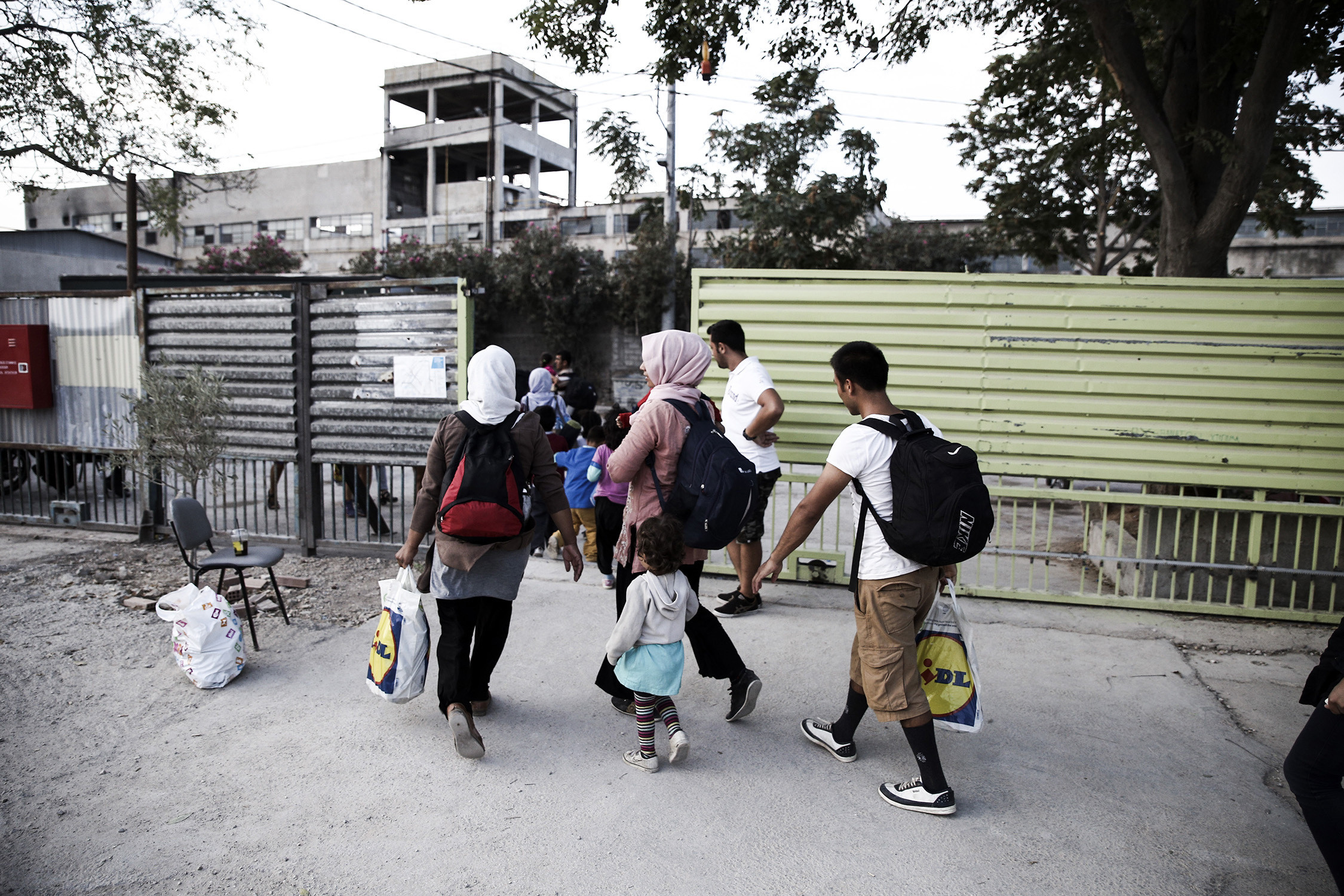 White makeshift houses are neatly lined up. Whoever wants to leave the camp has to go through a small house that serves as a reception. A sign on one of its windows reads “IN/OUT.” Another bungalow houses a medical center. The Red Cross operates out of it, and there’s a kitchen where the Greek Navy hands out food. The children's space is the most lively part of the camp. 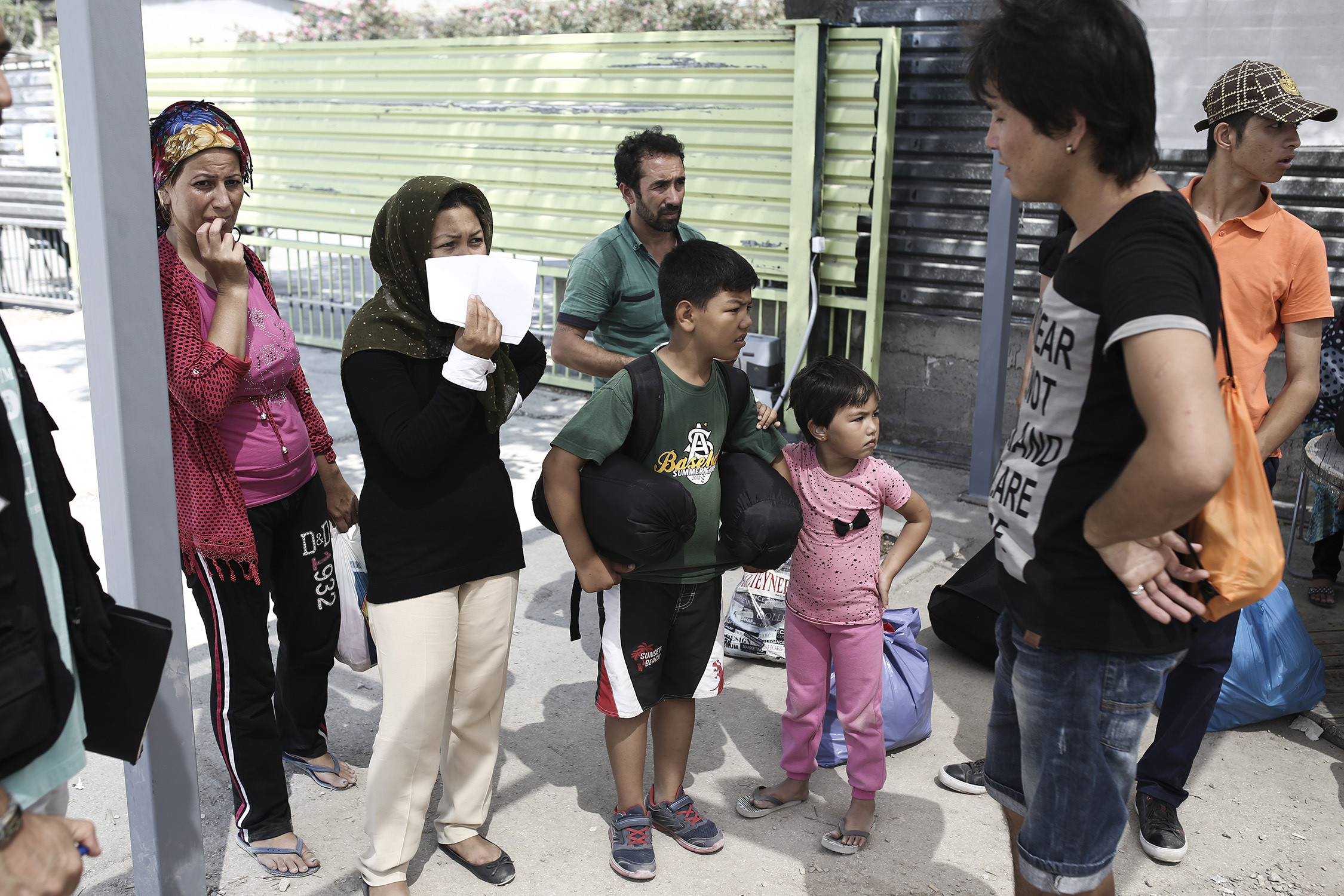 All sorts of people come and go: volunteers, employees of the Ministry of Migration and members of nongovernmental organizations. There are also people from the United Nations refugee agency, the NGO “Praksis” and the government’s asylum services.

Most of the refugees in the camp are Afghans who want to avoid camping out in public places like Victoria Square. Many of them leave after two or three days, once they receive money wired to them from friends and relatives, which will fund the next leg of their journey. 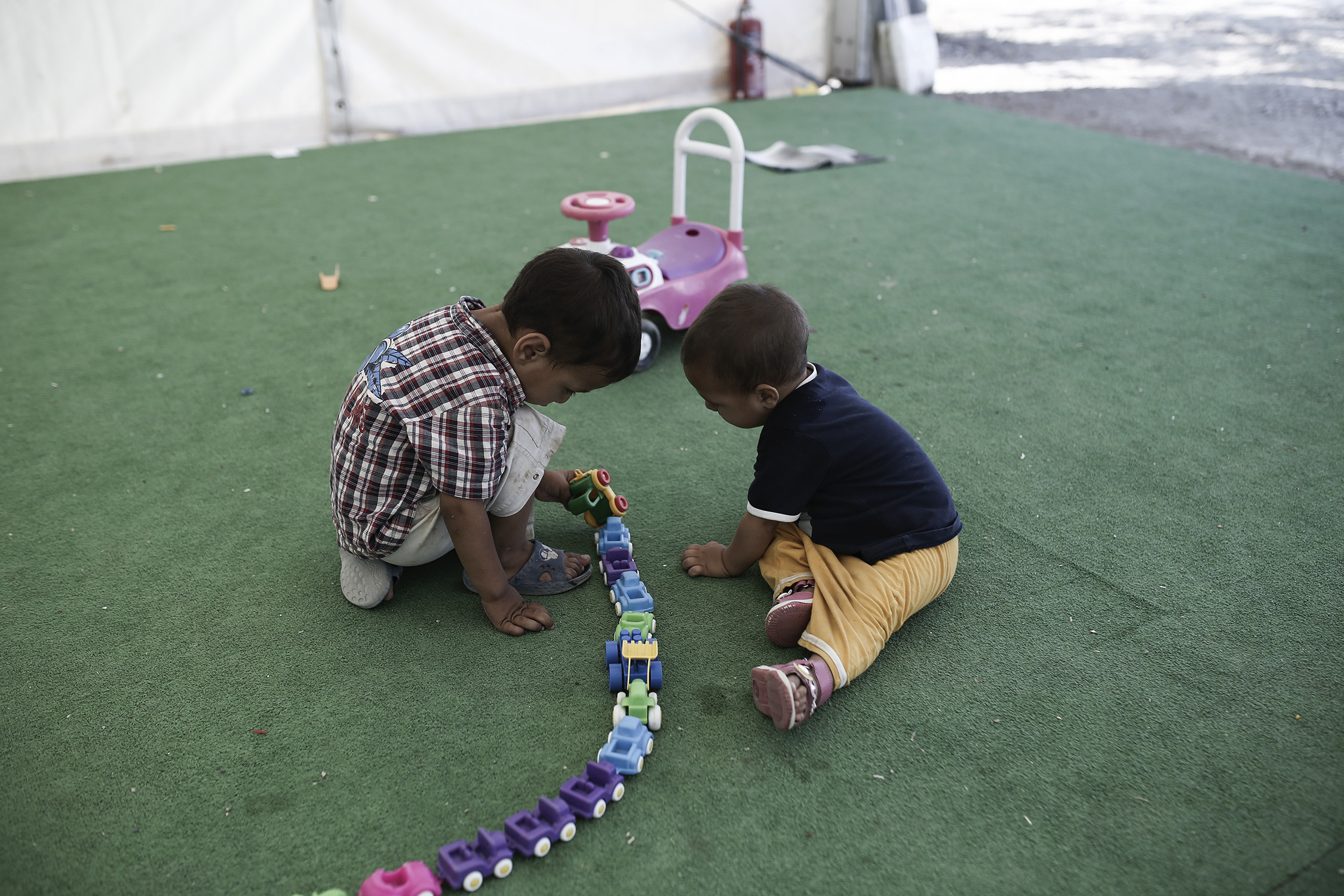 I meet Sayed Ahman in the children’s tent. He's about two or three years old and bursts into laughter every time he is teased. His dad, Atmajan, 42, came to Greece with his wife, little Sayed and his baby brother, Etmah. The family set out from their hometown 40 days ago leaving their seven and nine year old daughters with their grandparents. 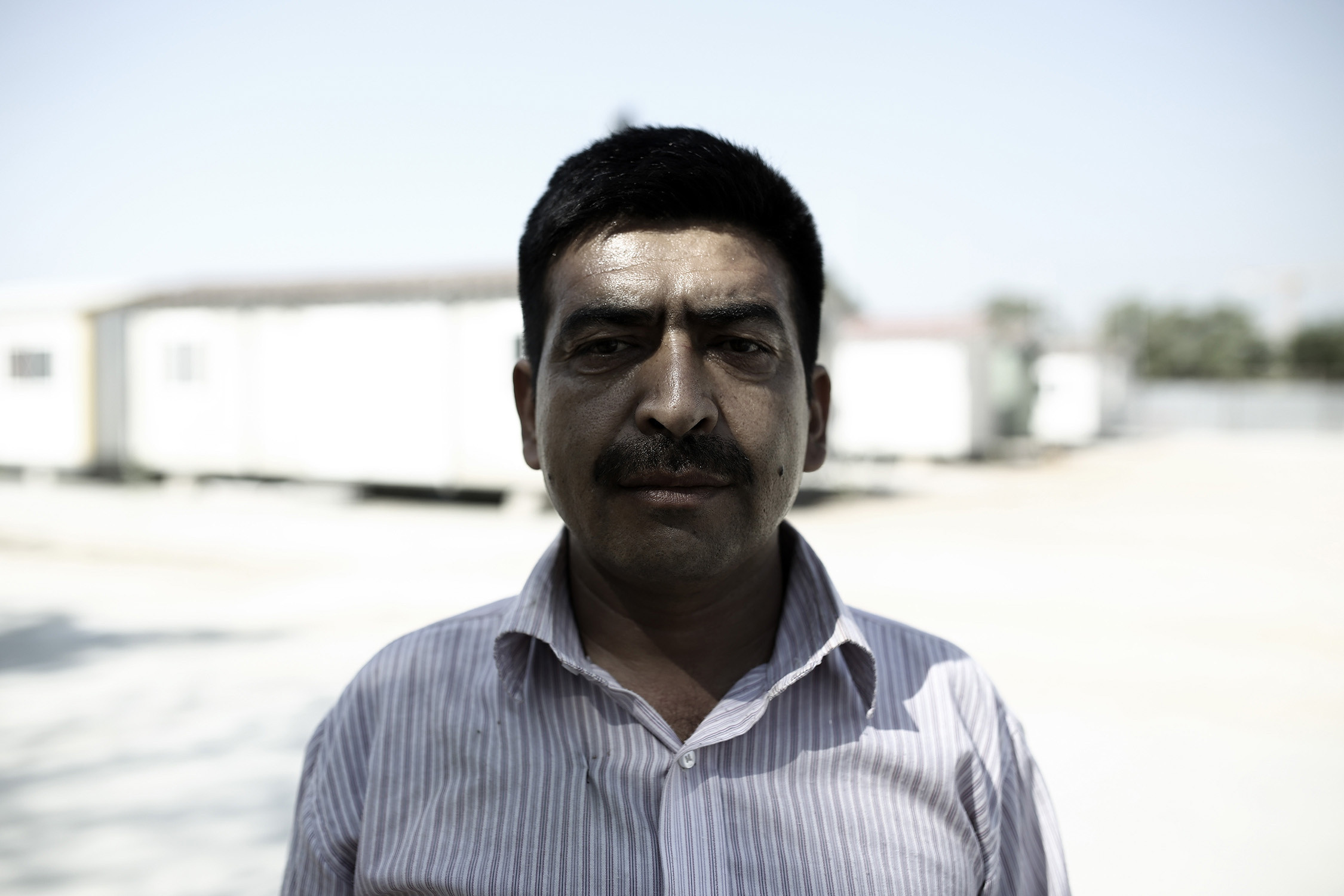 “In Afghanistan I had a job, which was OK considering the situation there, I drove an ambulance and many times I worked for the UN,” Atmajan says. “But everyday life in Afghanistan is really hard. There are the Taliban, the tribe leaders, the army even, you don't know who you should guard yourself from, who is fighting whom ... Working with the ambulance I saw a lot of terrible things. We had to leave.”

I ask him about the route they followed. “In 15 days we crossed through Iran and in another five through Turkey. Throughout the way we were with traffickers, we were scared to move by ourselves. You feel constantly in danger, you just go on without knowing exactly where you are,” Atmajan says. From Turkey, their journey was so hasty that he only remembers crossing over by boat. “These hours inside the boat with my wife and two kids were the most dangerous,” he says. 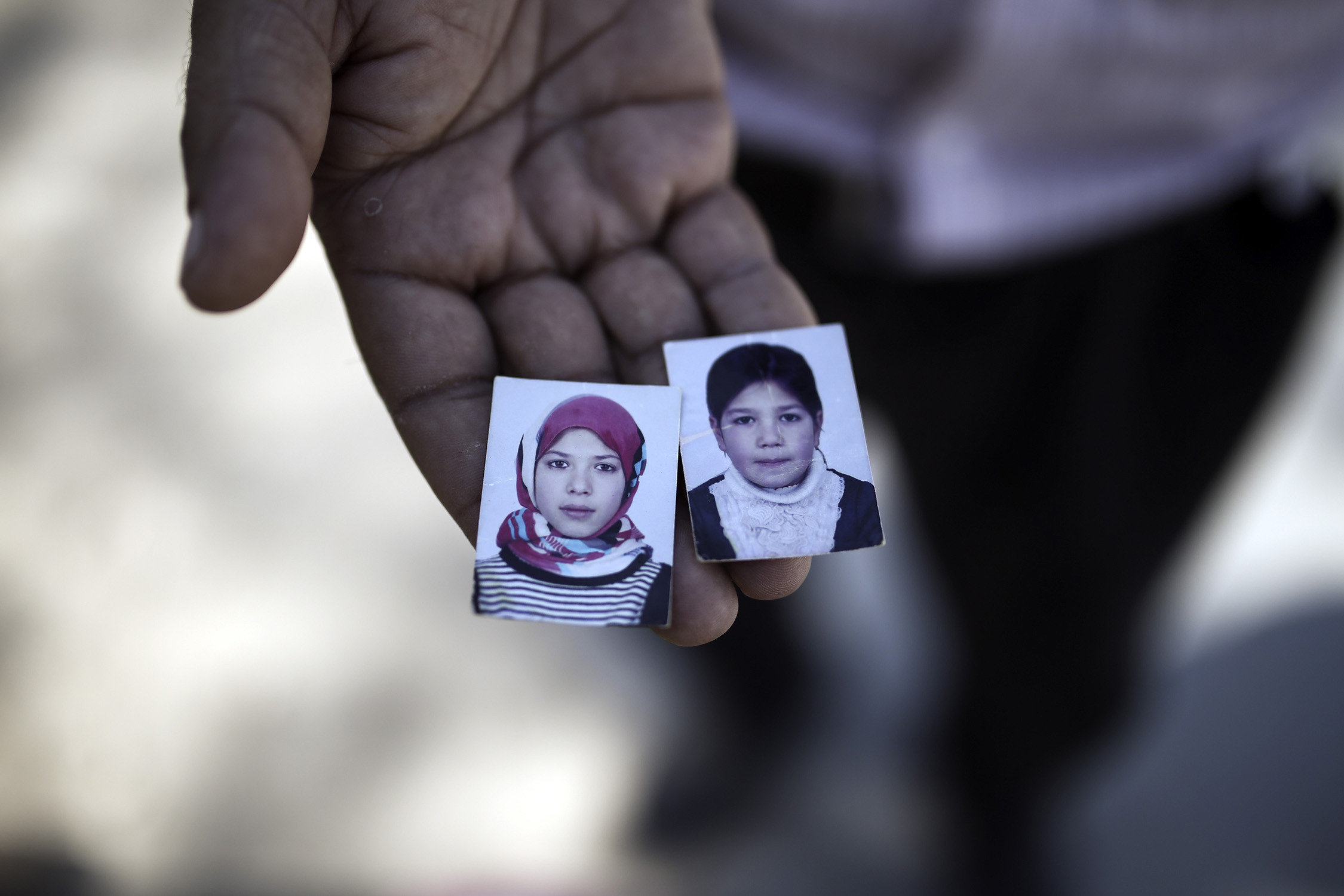 Anthi Karaggeli of the Greek interior ministry says that there are rules in the camp, but people are free to come and go. “We primarily want the people to feel safe and calm inside the camp,” she says. “They need the calm, they have been through so much. They have risked both their lives and the lives of their children, so they are very emotional. Here, they can catch their breath and keep going.”

There were small protests before the camp opened at the end of August. “It was seven people all in all who protested, and they are residents of the wider area because there is no neighborhood here,” Karaggeli says. “The number of people from Votanikos, from Eleonas, who arrive at the camp carrying clothes, food, milk, and toys for the refugees' children is far bigger. And they bring their children with them to play with these children, even if they don't speak the same language.” 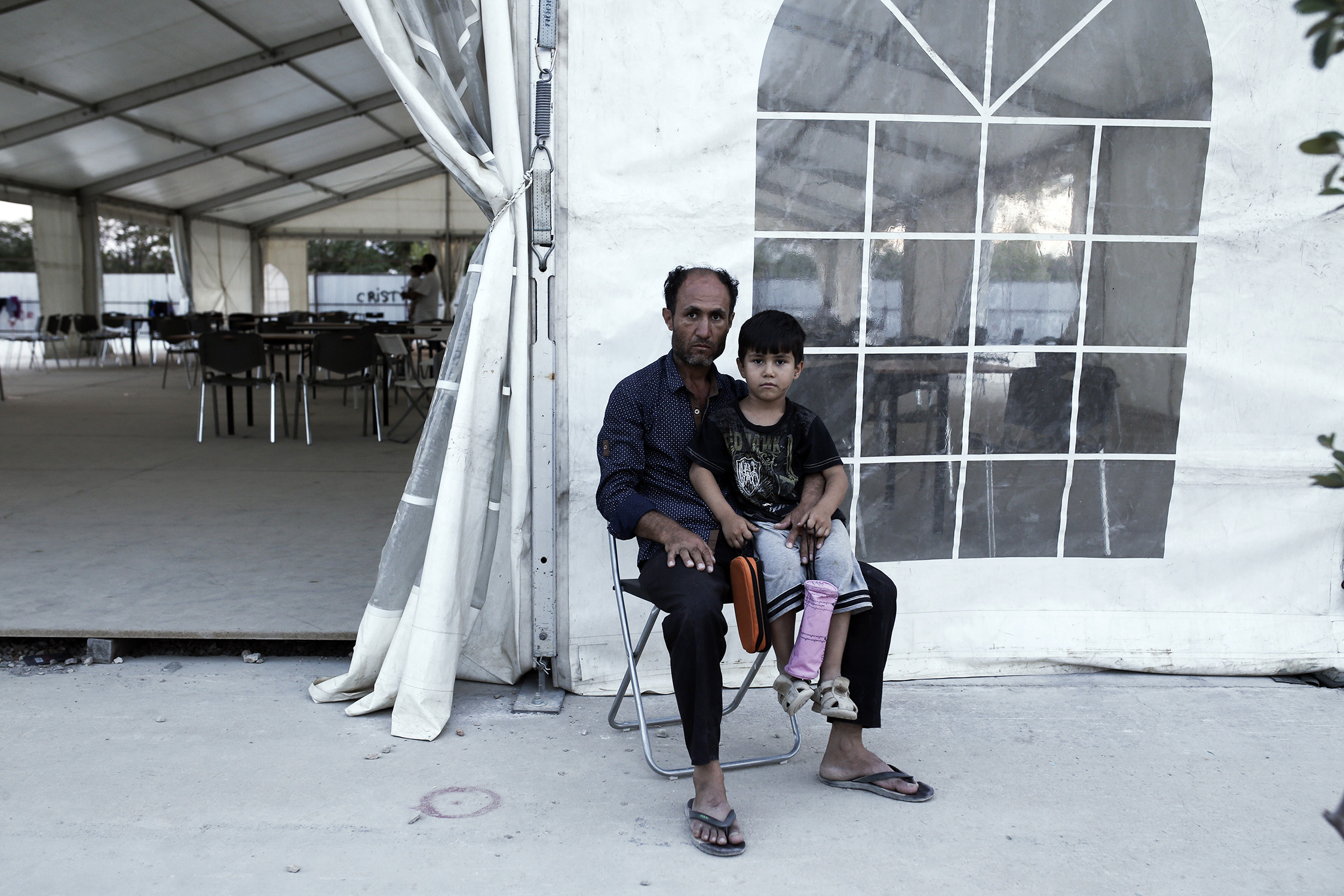 In the camp there are 94 little houses, 90 of which are occupied. Every house has four double bunk beds, a sink with some small cupboards, a toilet with a shower and air conditioning. The camp can hold 720 people. Two families of four can stay together, but single men traveling alone are sheltered in another section, not isolated but separate. 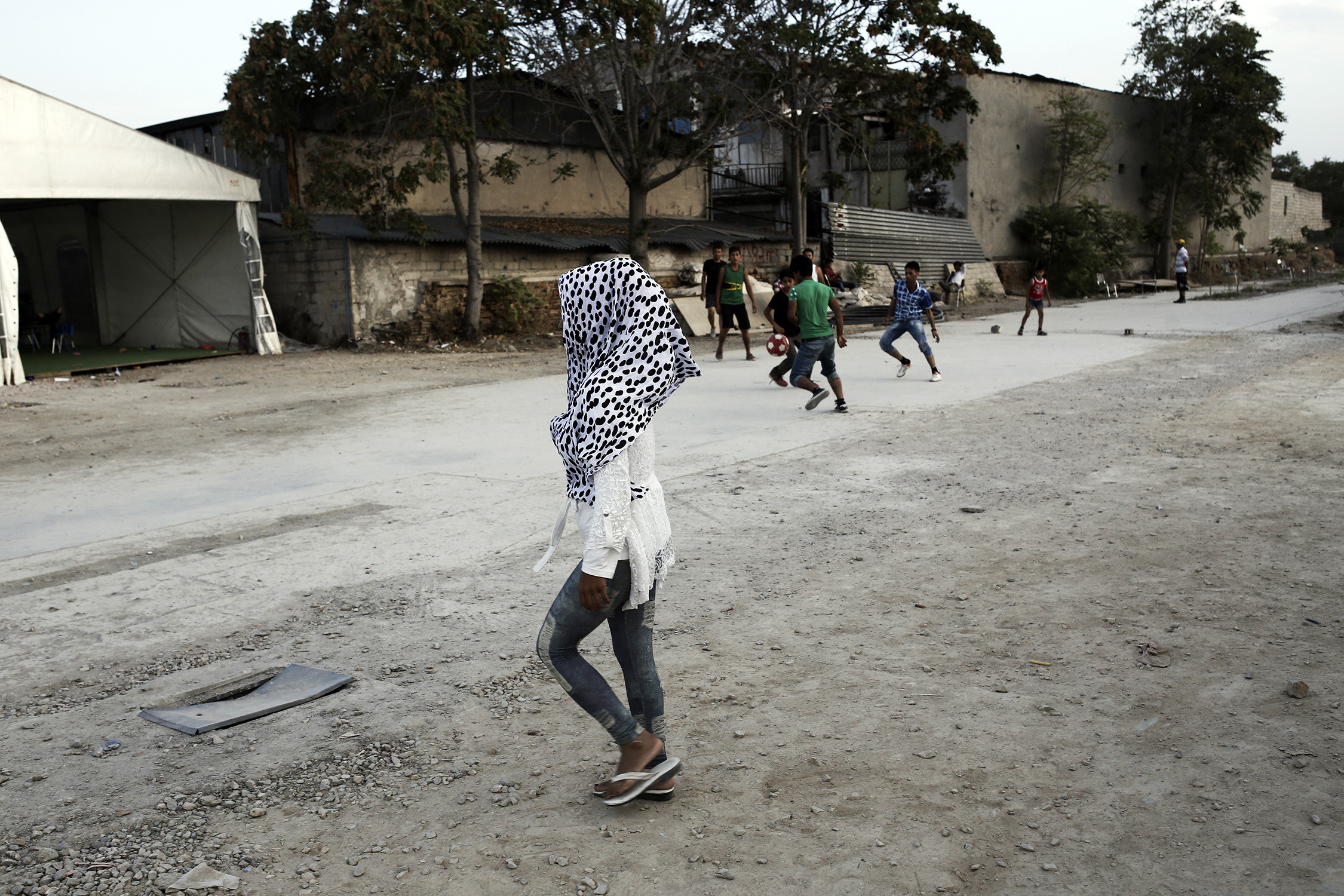 A refugee comes closer. He wants to share something. He says he lost most of his money in the boat to the Greek island of Lesbos. He is here at the camp with his family, seven people in total. The man says the trafficker asked for 1,000 euros for each person and half that amount for every child for them to continue the journey, but the family only has 400 euros left. 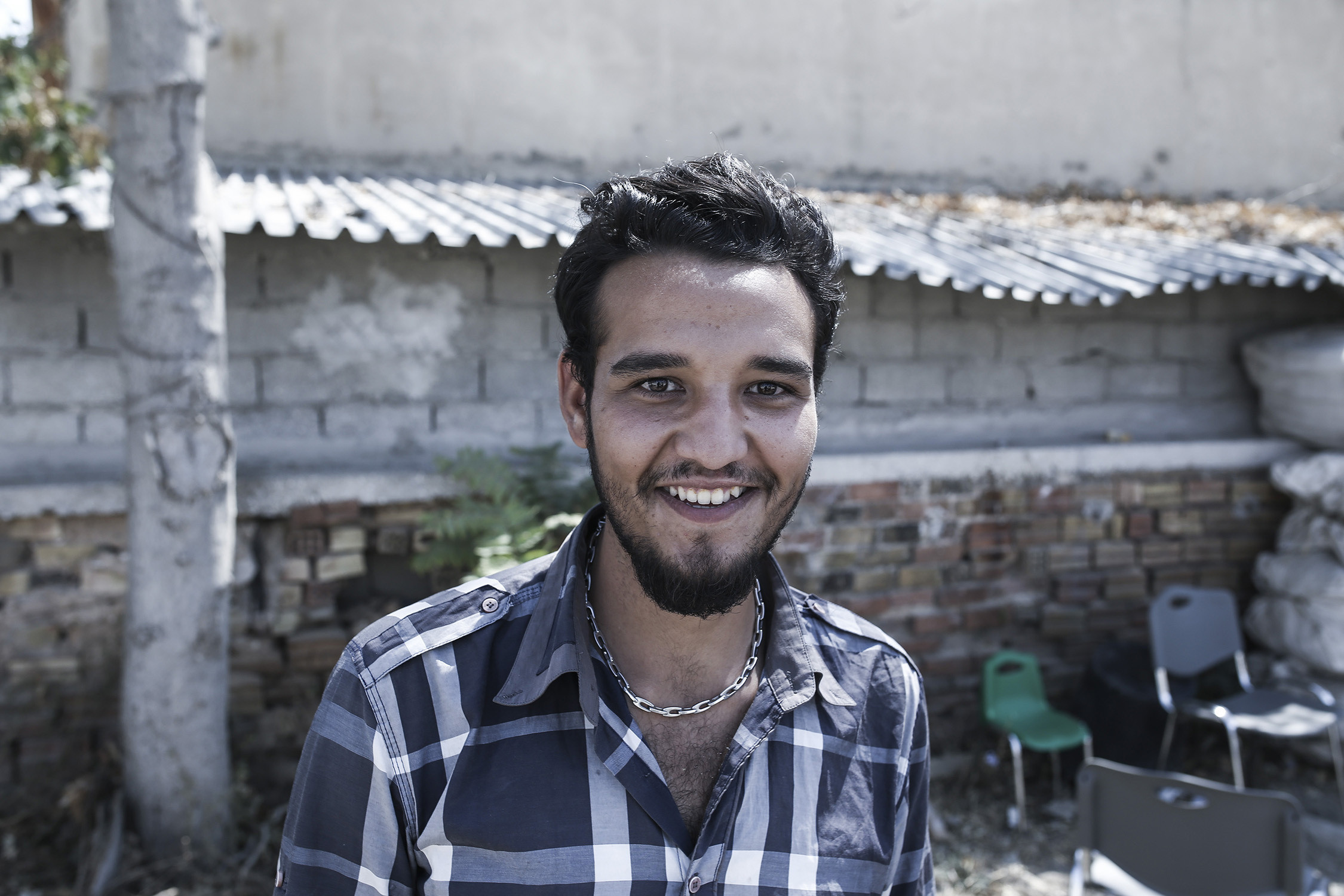 “I don't know what to do,” the man says. He shows a fresh scar on his forehead and says he was attacked by Pakistanis with sticks and stones when he was in Lesbos. The situation was really tough. “Here we are respected and taken care of," he said about conditions in the camp. "We thank them, we thank you all.”

Mohamed, 22, and Khojand, 23, are Afghans, but they were raised in Iran, where their families sought a safer future. They met on the journey to Greece and became friends. Both men are considered “economic migrants.”

I find them listening to Iranian rap in a shady part of the camp. 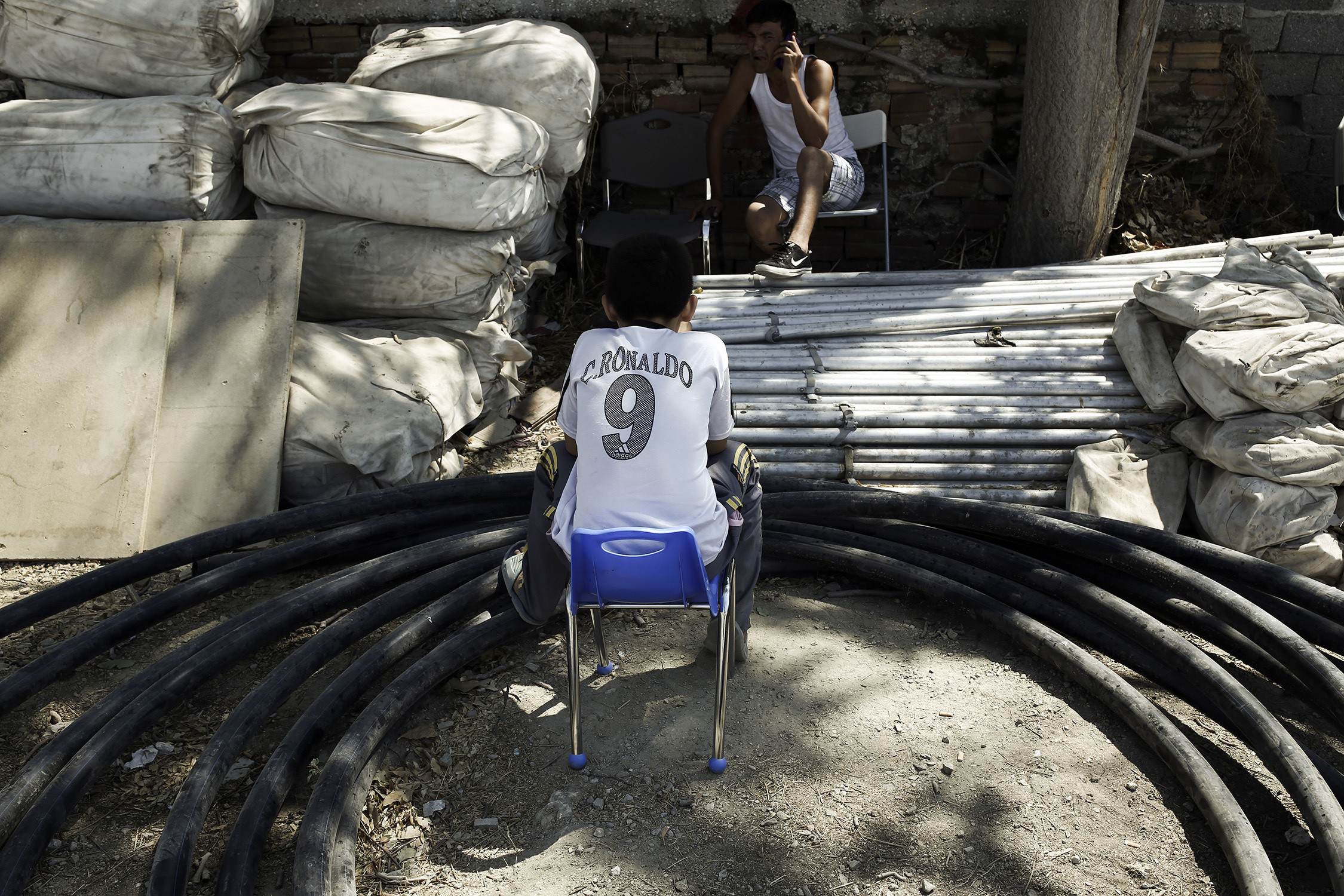 Mohamed and Khojand say they left Iran because the state treated them like second class citizens. They passed from Iran to Turkey, walking for hours in the mountains, along with the traffickers. At some point they were robbed by locals who wanted to get the traffickers' money but eventually took personal items from their “cargo”. To travel from Iran to Turkey, Mohamed and Khojand say they paid $500 and another $1,000 to reach Lesbos on a dinghy. 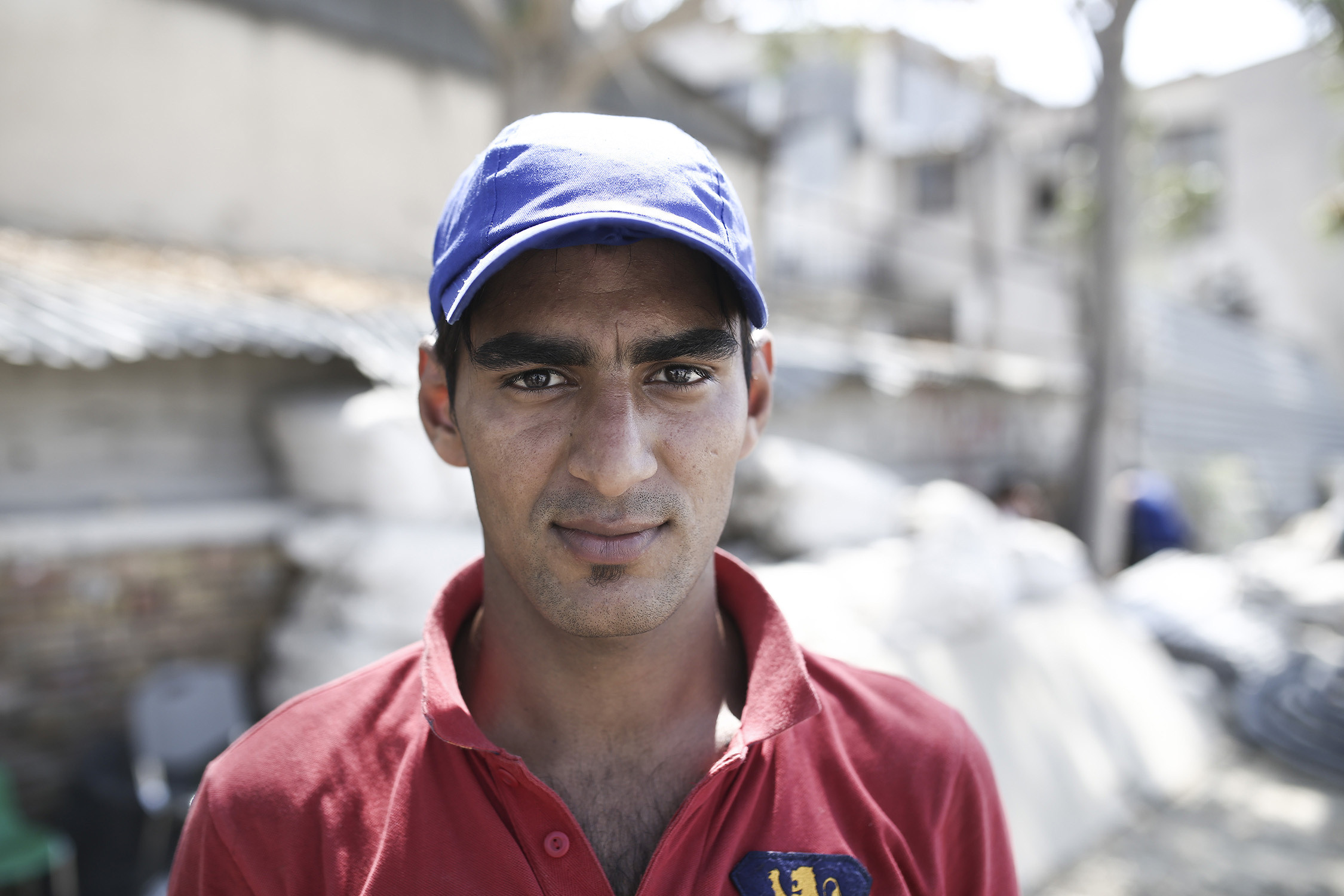 It took them, and 35 others, two and a half hours to reach European soil in the little boat. The sea was calm at first, then somewhere on the way the boat's engine crashed and started to flood. They had to empty the waters. "We were really scared," they say.

“Here, everything is great,” Mohamed says about the camp in Eleonas. “There is no such camp in Asia.” 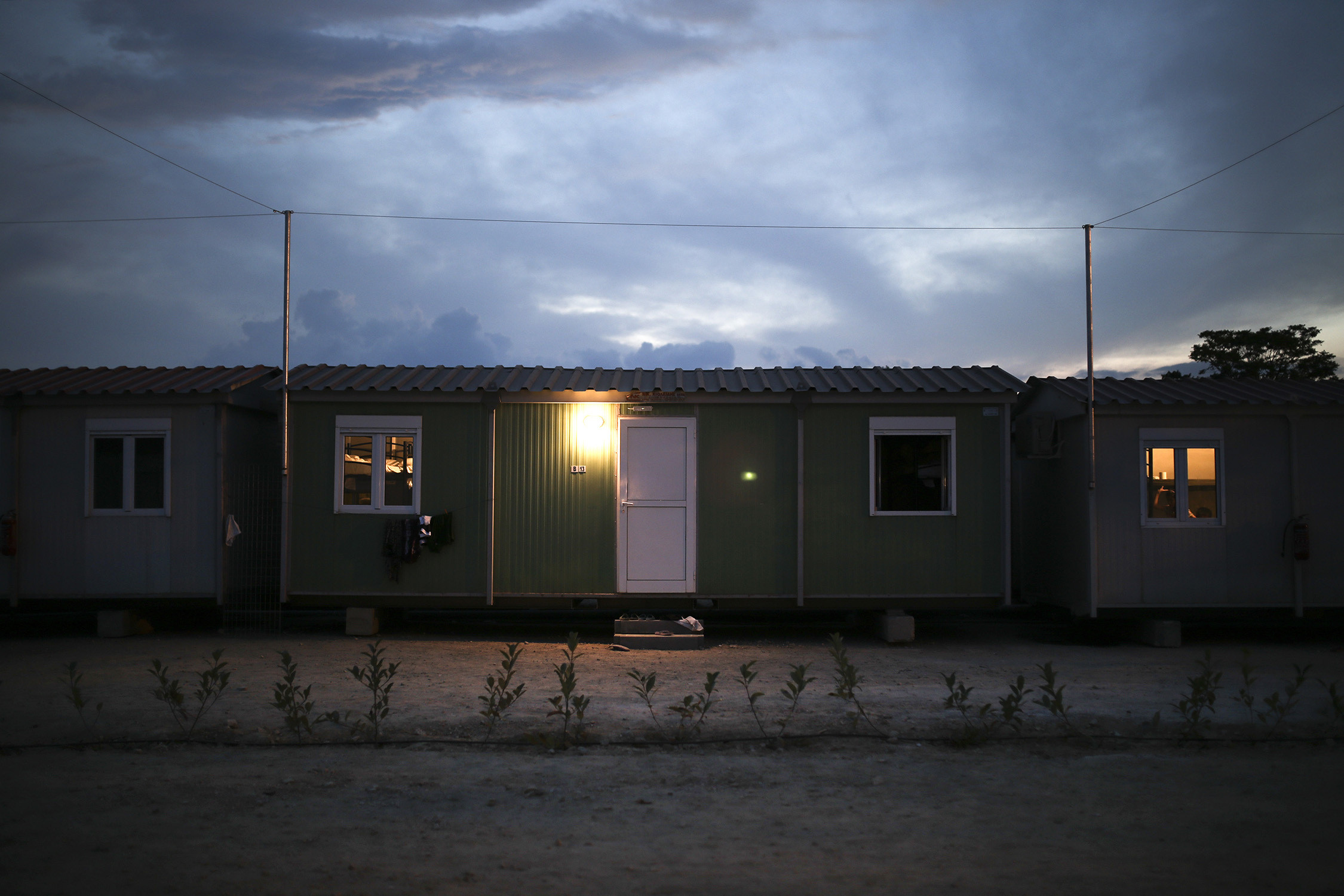 It's getting dark. Volunteers with the Greek Red Cross entertain the children with balls and drawing.

Katerina, a volunteer, says, “Despite their stress and fatigue, they are full of energy, typical children. They are so happy with the little things like painting. When they leave here, they never cry, we always see them smiling.” 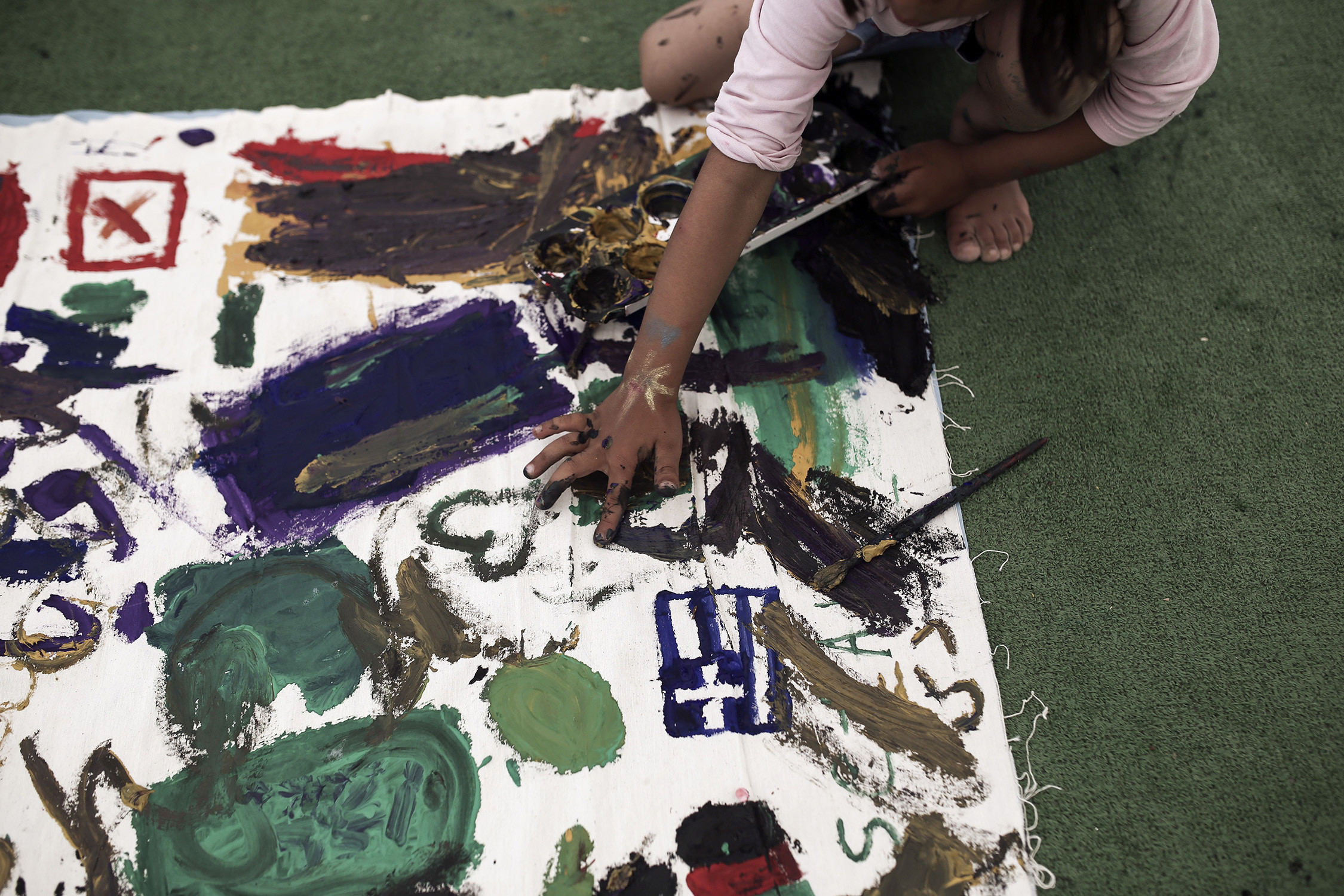 There are nights when the refugees gather in a circle and sing. “They relax. And we with them. We forget to go home,” Karaggeli says. 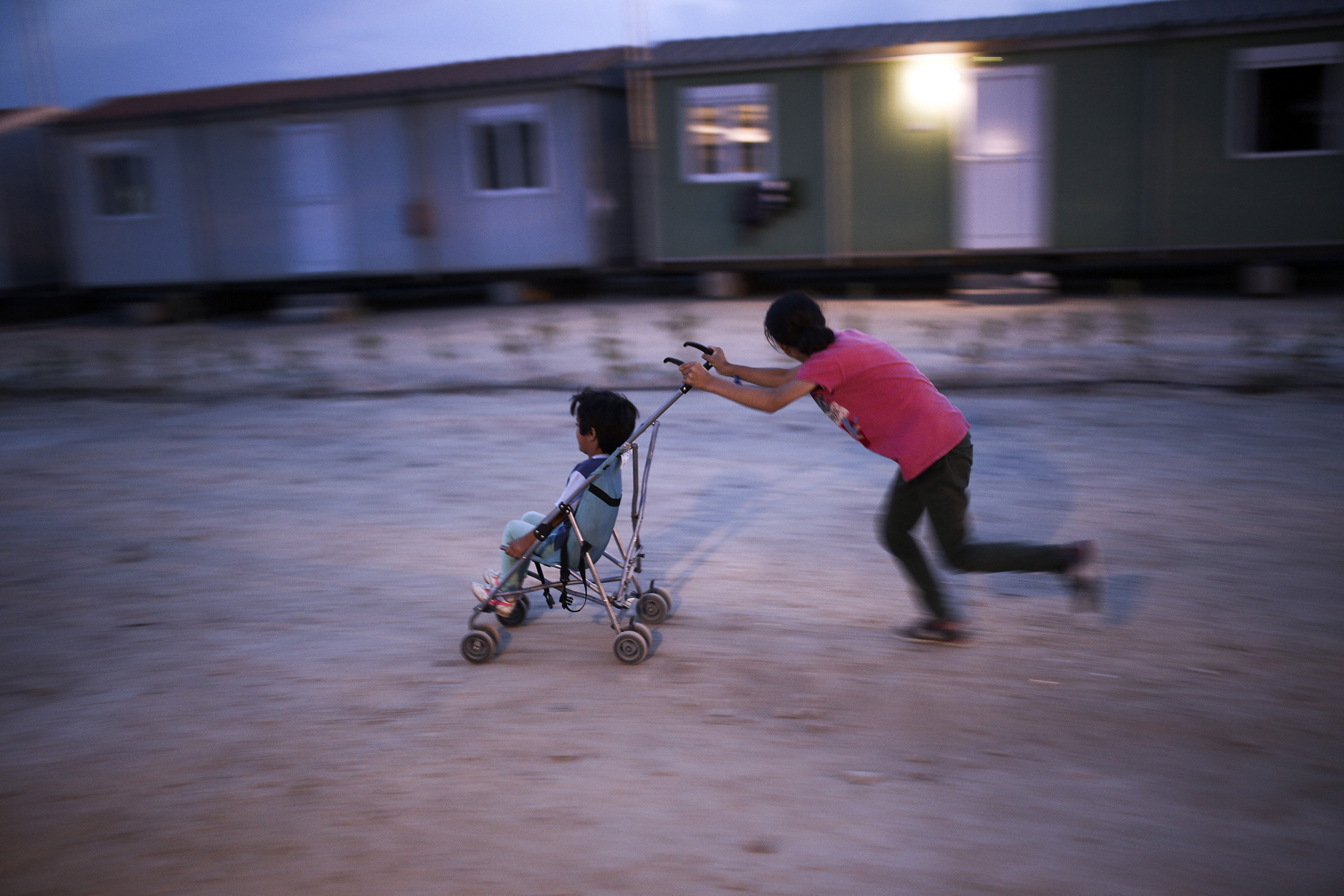 All photos courtesy of Menelaos Myrillas.

This post first appeared on HuffPost Greece and was translated into English. It has been edited for clarity.