Good news coming out of the circus industry today! Ringing Bros. and Barnum & Bailey have announced they will be eliminating elephants from shows by the year 2018 due to animal welfare concerns.

"This decision was not easy, but it is in the best interest of our company, our elephants and our customers," CEO Kenneth Feld said in a press statement. Feld's 43 elephants, which form the largest herd in North America, will retire to a 200-acre sanctuary in central Florida.

"There's been somewhat of a mood shift among our consumers," Executive Vice President Alana Feld told the AP.

The "Greatest Show on Earth" mentioned it will be difficult to fight local legislation. Oakland, California, became the largest U.S. city to ban the use of bullhooks in 2014. Los Angeles also created a ban that will begin in 2017. A bullhook, for those of you who don't know, is a sharp hook that is used to corral elephants. It is swung and inserted into the elephants' skin, causing them immense pain.

"This is a startling and tremendously exciting announcement," the Humane Society of the United States told The Huffington Post in an emailed statement. "With consumers now so alert to animal welfare issues, no business involved in any overt form of animal exploitation can survive in the long run."

Ringling Bros. and other circuses have been under careful watch from welfare groups due to their treatment of the elephants and other animals.

The American Society for the Prevention of Cruelty to Animals and other groups came to an agreement with Feld Entertainment in 2014 to end a long legal battle over allegations of mistreatment of elephants. These groups paid more than $16 million to cover Feld's legal costs for the 14-year litigation. 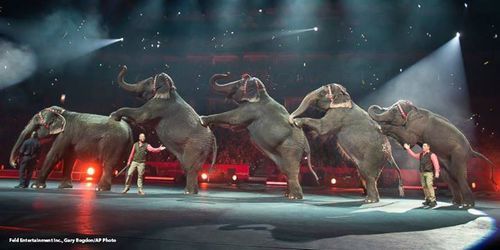 Feld Entertainment reached a $270,000 settlement in 2011 with the U.S. Department of Agriculture for the alleged violations. The settlement allowed the company to avoid admitting wrongdoing or USDA violations. "Animal care is always a top priority at Ringling Bros.," Kenneth Feld said at the time.

The penalty was the largest recorded to date in the Animal Welfare Act's four-decade history. Each violation carried a maximum $10,000 fine, meaning the USDA charged them for at least 27 violations. It was revealed that the elephants were "whipped with bullhooks, trapped in train cars filled with their own feces, and chained in place for a good part of their lives."

"This is a tremendous victory for the elephants ... as well as for everyone who fought for this change," ASPCA President and CEO Matt Bershadker said in a statement. "We continue to oppose using elephants or any wild or exotic animals in circuses, carnivals and other traveling animal shows."