Okay, fine -- elephants aren't people. But they're like people in a lot of ways, and on World Elephant Day, that counts for something.

And yet around 35,000 of these pachyderms were killed in 2013 alone, and there's a continuing demand for their valuable ivory tusks. If we aren't careful, most of these creatures could be extinct by 2020, according to some conservationists.

It's a tragedy for any animal to face extinction, but it would seem like a special tragedy to lose this one. Our very history is entwined, with elephants and humans evolving in parallel hundreds of thousands of years ago. While we're still learning about elephant intellect -- a far greater number of studies have been conducted on other large-brained mammals like chimps -- what's been found so far suggests a creature that's kind, self-aware and very loyal. Surprisingly, elephants aren't so different from us.

1. They have a sense of self, like chimps, dolphins and humans...

In a 2006 study of three Asian elephants, Emory University researchers placed a mirror in the enclosure of three female Asian elephants. Each creature investigated the mirror by touching it with their trunks to see if it was really another elephant, exploring the back side to see if there was another elephant hiding there, or inspecting some part of herself to see if the reflection copied her. One, named Happy, even passed the "mark test," which included touching a white X the researchers had painted on her (and the other elephants') foreheads, only visible in the mirror.

The fact that Happy passed that test, the researchers said, indicates the capacity of elephants to recognize themselves as individuals rather than just part of a pack. And while the other two seemed ambivalent toward the white marks, the researchers noted that only around half of chimpanzees -- generally held up as one of the most intelligent creatures -- pass such tests.

Another test showed that elephants understand pointing, using, of course, their trunks. It sounds simple, but pointing indicates a sense of self, too -- your independent thoughts may be communicated to another through gesture. Even chimps have trouble with pointing.

2. Which allows them to be more empathetic.

Having a sense of self, the Emory researchers suggested, may be a reason for elephants' social and altruistic habits. Evidence suggests helping one another out is a regular part of life in an elephant herd.

Researchers at an elephant park in Thailand studied 26 elephants in six groups to determine that elephants comfort other elephants during suffering. (No, they didn't stress the creatures out on purpose -- they waited for such an occasion to present itself naturally, like a snake rattling in the grass or the sound of a dog nearby.) They saw the elephants make chirping noises and reassure the unhappy ones with a kind "hug." Previously, this behavior was only seen in apes, wolves and some kinds of birds.

Certain anecdotes suggest their compassion extends to other creatures, as well. An elephant in India trained to lower heavy wooden posts into pre-made holes once refused to place one of them until a sleeping dog was shooed from the bottom of the hole.

In a 2011 experiment, researchers in Thailand devised a system in which two elephants could reach a platform of food only if each pulled her own rope. Pulling one end got them nowhere. Not only did all of the test subjects figure out the rope system, but they understood the importance of a helping hand trunk -- they couldn't get to the food by themselves.

One especially clever elephant, though, thought up a way to game the system. Instead of pulling on her end of the rope, she simply stood on it, forcing her partner to do all the work in pulling. (There's always that one.)

4. And they grieve for their loved ones.

It's long been thought that elephants grieve -- they're even capable of shedding tears. Deceased elephants are buried under dust, branches and leaves, and a mother elephant may stay with the body of a deceased calf for days. In one experiment, researchers at the University of Sussex found elephants have a strong interest in their own dead, preferring to investigate the skull of a deceased elephant over a piece of wood or the skull of a rhino. When members of a herd pass a dead elephant, they've been observed silently touching the bones, perhaps out of respect. And when members of a herd lose a beloved family member, they become visibly and audibly distressed. Other herds may visit the body, as well.

Although elephants have been observed displaying markedly less interest in the carcasses of other animals, one anecdote suggests otherwise. In 2004, an African elephant trampled a human mother and child to death in Kenya. Before leaving the scene, however, it covered the bodies in leaves and twigs.

5. After all, elephant families have a lifelong bond.

Unlike most human societies in history, elephant herds are matriarchal, where one female cow presides over a herd of females and adolescents. Adult males, meanwhile, roam either alone or in bachelor herds. The strongest relationship is between mother and child -- mothers and daughters, in particular, will usually remain together their entire lives until the mother passes away. And it's not uncommon for responsibility of the herd to be passed down to the deceased matriarch's closest female relative.

6. And they're smarter than we give them credit for.

Research in the past decade has shown elephants to rival the brainiacs of the animal kingdom in their ability to use tools. Elephants have been observed using tools in captivity and the wild, including branches to swat away flies. In one study, however, researchers were able to show just how insightful this species can be. After hanging a delicious cantaloupe treat in the enclosure of seven-year-old Kandula -- just out of reach -- researchers observed him rolling a square cube to the treat, standing on it for better reach. What was remarkable about that feat, the researchers explained, was that Kandula did it without any trial and error, demonstrating an understanding of cause-and-effect problem-solving. Watch him here.

And it's also been observed at a certain zoo in Poland, angering a local politician. ("We were supposed to have a herd, but as Ninio prefers male friends over females, how will he produce offspring?") Unlike humans, elephants are probably a little more accepting of others' personal preferences.

Prepare to be dazzled by the not-entirely-harmonious piano stylings of this elephant named Peter and his human friend!

8 Facts That Show Us Elephants Are People, Too
Raju the Elephant 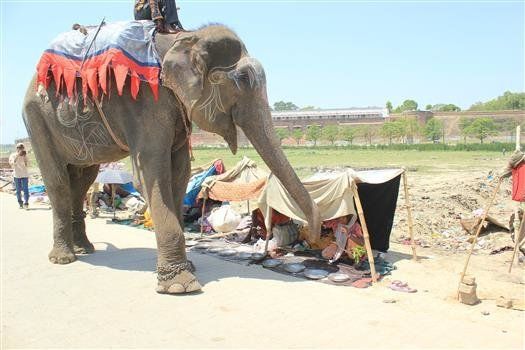