When sitting in close proximity to a group of elephants, it always amazes me how small an elephant's tusks are relative to its body. Certainly far less than a hundredth of its weight. But because of these tusks -- their teeth -- tens of thousands of elephants die each year.

I've been studying a population of African elephants in Kenya's Samburu National Reserve for the last 17 years -- how they interact, why they move, where they go, and how they make decisions. This offered the chance to really get to know different families of elephants, watch them be born, grow up, and have children of their own. With Save the Elephants, I have identified and named more than 1000 elephants and their families -- like Queen Elizabeth of the Royals, Rosemary of the Spice Girls, and Ebony of the Hardwoods families. But it also means that I have watched many of them die. Witnessed their young become orphans. Seen the destruction of entire families and the annihilation of the great male tuskers. Trying to reconstruct the killing of Bonsai of the Hardwoods family was one of the worst -- seeing the bush she was feeding on, the blood trail originating from the initial bullet strike, and the markings from when her tusk dug into the earth as her feet slipped. But she managed to rise again, was shot again, and still walked over two miles before she succumbed. We found her orphans a few days later, staying with their aunt but terrified by innocuous sounds like the wind in the acacia trees. The social fabric of elephant societies across the continent is rapidly being shredded. 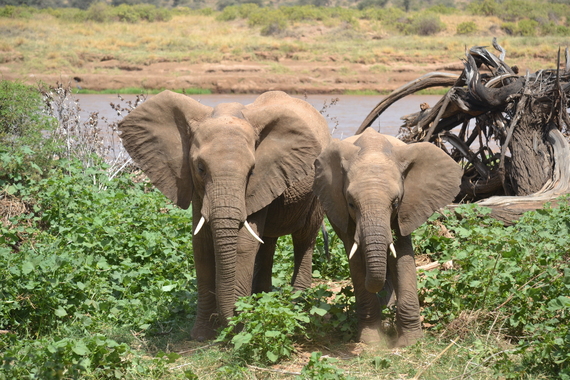 Bonsai's orphans a week after their mother's death: over a year later, they continue to stay together and rebuild their lives.

We've known that poaching of elephants has been increasing rapidly. But for the first time, we have numbers to show how many elephants have been killed for ivory across the continent in a new paper we published in the Proceedings of National Academies of Science this week. The numbers are unfathomable. 100,000 individual elephants have been killed for their tusks in three years across the entire African continent. Our research shows that the tipping point for the species was reached in 2010, when the numbers of elephants being killed began to drive an actual decline in the species.

Why is this happening? Over the last several years the demand for ivory art and trinkets has increased, driving up the price of ivory to a level that has attracted militants and professional criminal traffickers (those moving drugs, humans, weapons). This has propelled the rise in poaching rates. Now, three quarters of all elephant populations are declining. Across African ecosystems populations are being exterminated, and with their loss goes the services they provide (e.g., habitat enhancement, tourism value). But there are exceptions. Our analysis indicates that 1/4 of elephant populations are stable or increasing. They are gems of successful conservation in the face of enormous pressure from ivory markets; examples that desperately need to be replicated.

The 100,000 dead does not adequately capture the full impact of the killing on elephants. Ivory poaching targets individuals with the largest tusks, the primary breeding males, the matriarchs of families, and the mothers of the young. Elephants are intelligent and sensitive with familial bonds similar in strength to those humans experience. These killings leave behind orphans, left to fend for themselves where they may be adopted into another family or grasp onto a particularly nurturing adolescent female taking on the responsibility of leading much earlier than should be required. It has been a terrible thing to systematically record this process as it plays out in the lives of elephants we know, but also inspiring to bear witness to their resilience in the wake of these killings.

The local communities in northern Kenya have been critical to diminish the epidemic of killings where we work. Coordinated interventions and the intelligence they share with us, the Kenya Wildlife Service and our partners have helped change continuous elephant poaching to sporadic and opportunistic killings. This success is occurring across many sights in Africa, lead by a coalition of private citizens, government and non-government organizations. But the cost has been enormous, in terms of dollars, human lives and elephants in the process. Just recently, a local community scout in our area was killed. Meanwhile professional rangers are continuing to die to protect the iconic species.

The lessons of the last elephant killing spree in the 1970s and 80s taught us that pressure on elephants will only abate when demand for ivory is curbed. Education and awareness campaigns on the killings to feed the ivory markets repulsed the primary consumers of that era (primarily western and Japanese), breaking the back of the last episode of killing. Conservationists are fighting to replicate this globally again. Excellent work is being conducted to inundate the primary consumers with messaging regarding what buying figurines, chop sticks and works of art does to wild elephants. The groups need to be supported and helped to succeed.

Numbers matter. They can elicit action and measure success. Now we have them on the scale of illegal killing. We can identify the populations most at threat. We know the primary ivory consuming nations, and even their relative importance. We know what to do and where to do it. It is time for global leaders to act on this information. Global support for range nations in Africa, particularly those that have shown initiative and are demonstrating success, must be enhanced. Where they aren't, the non-governmental partners should be supported. Most importantly, the primary consuming nations must take responsibility for the devastation their consumption is causing. They must act to undermine demand, publicize the impact of ivory consumption on wild elephants in Africa, and close their domestic markets in which illegal ivory is being sold as legal ivory. The latter is critical, as end market illegal ivory laundering is the linchpin in this chain. Sanctions eliminating commerce in endangered species should be enacted on those that do not.

We know what to do, it is time to do it. Elephants don't have the time to wait.

George Wittemyer is the Scientific Board Chairman of Save the Elephants and an Assistant professor in the Department of Fish, Wildlife and Conservation Biology at Colorado State University.