In India, elephant handlers often train baby elephants to be submissive by chaining them to a post. They'll fight with all their will to break free. Day in and day out they'll try, but eventually they just give up. When the baby elephants become adults they no longer need chains to be tied in place; just a thin rope will do. 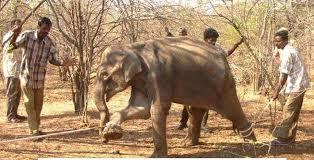 Of course an adult elephant with its tremendous strength is perfectly capable of breaking the rope, but since its experiences as a baby had convinced it otherwise, it never tries.

In many ways we're not much different from those elephants. Our own painful past experiences are capable of limiting us in a similar fashion. It's worth taking a look at some of the ropes each of us has tied around our own ankles. Being aware of what these ropes look like and feel like is important. The more we know about the causes of our own fear, the less ground our inner critic, M.A.R.V. (Majorly Afraid of Revealing Vulnerability) has to stand on. The less convincing his arguments to us will be.

But looking at a memory that has created our "elephant ropes" can be frightening, especially in cases where people have suffered crippling emotional, physical or sexual abuse. Thank God my fears weren't derived from anything that serious, but sitting here right now and typing out one of my own painful memories for everyone to see is difficult.

When I think back on the "Elephant Rope" breakthroughs I've made over the years -- moments of discovery when I realized just how I'd been fooling myself into thinking I was trapped or chained, I'm always amazed at the innocence behind the experiences. I mean, we've all had traumatic moments in our lives of some sort, and yes, those moments can become like Elephant Ropes, but more often than not, the ropes that are the most constraining and damaging are ridiculously subtle. They stay just under the radar, and they have to or else we'd recognize the illusion and they'd lose their power. Shame has its root in innocence, and to shine a light on Marv's toolbox usually requires traveling back in our past to those naïve moments of an Elephant Rope's first weaving.

I remember one such incident in the late summer of 1972.

It was a scary time for me. Soon I'd be going to junior high and meeting all sorts of new kids. I wasn't good at sports and in Minnesota, everyone played either football or hockey. The girls seemed to really be attracted to guys who played sports, and I felt like I'd never be able to compete for their attention. One afternoon, my parents were away and I called the guys in my band and asked them to come over for a rehearsal. We set up in the garage with the door closed and started running through our songs. After a while the music was sounding so good we opened the garage door so everyone in the neighborhood could hear.

Twenty minutes later, small groups of kids started walking over to watch us: kids from other elementary schools who'd be going to my junior high a month from now. It was really exciting and pretty soon the trickle of kids had grown to a crowd, including some really cute girls that I'd heard about but never actually met. To my good fortune our rehearsal had turned into a full-blown rock concert and after we'd played for an hour or so all the kids started filing into my house and into the basement where my bedroom was.

It was then that I blasted an eight track of Jimi Hendrix through enormous speakers that lit up in different colors to the beat of the music. As Jimi was singing, "Cross town traffic, so hard to get through to you," I started going wild and whipped off my tank top, spraying my underarms with a can of Right Guard in perfect time to Jimi's guitar solo. I thought it was hilarious and all the guys were playing air guitars with orgasmic expressions on their faces. All I could think about was how great I felt and how popular I'd be with all these new kids in the fall when school started.

When we finally went outside to cool off, there was a group of incredibly cute girls in my driveway. There they were -- at my house! This was the moment I'd been waiting for. These girls were going to fawn over me! To this day, I can still remember feeling supremely confident as I walked towards them. And then the record-scratching moment of panic as one dark-haired girl named Janelle Wittenberg suddenly blurted out, "Himmelman, you're so immature. You're not even ready for seventh grade."

Cue the sad violas and the lonely oboe...

Today, looking back on that moment, I don't see a loser at all. I see an incredibly creative and interesting kid who was doing something completely original and entirely different from what anyone going into Westwood Junior High was doing at the time. I had my own band. We were playing my original songs. I was into Jimi Hendrix and I was daring and funny enough to spray deodorant on my underarms in perfect time to "Cross Town Traffic." I'd love that kid if I met him today. As I think about Janelle and what she said, I wonder why I didn't just stare her down and say: "What do you know about maturity, bi^&h? You're only 12." As it turned out, Marv seized on that moment and said:

"Peter, I told you not to do weird things. Right Guard? In time to Jimi Hendrix? Oh crap, no! Please, don't embarrass yourself anymore, just try to be quiet and fit in this fall, okay? Seventh grade's a big deal."

More:
business leadershipInnovationsinger songwriterchicagoGPS For The Soul
Newsletter Sign Up