Global financial integration and the linkages between the financial and the real sides of economies are sources of huge policy challenges. This is now beyond doubt, after what we saw in the run-up to and the unfolding of the 2008 global financial crisis. A newly released book -- Dealing with the Challenges of Macro Financial Linkages in Emerging Markets -- co-edited with my World Bank colleague Swati Ghosh, sheds new light on those multiple challenges.

Asset prices and leverage by financial institutions are at the center of the interaction between finance and the real economy, and the main conduit through which booms and busts are generated or amplified. Banks and other financial intermediaries can easily extend their balance sheets when asset prices are rising, further fueling asset price booms, with a corresponding feedback loop on those balance sheets. Banks resort to funding with non-core liabilities -- different from those on which banks draw during normal times, such as retail deposits by households -- increasing exposure to balance-sheet weaknesses or mismatches on liquidity, maturity, and/or foreign exchange (Hyun Song Shin).

Systemic risks are also cross-sectional, arising from the growing interconnectedness of financial institutions and markets during booms (Viral V. Acharya). Financial innovation, growth of non-regulated "shadow banking" activities, and complex chains of financial intermediation facilitate the build-up of an increasingly vulnerable pyramid of assets-liabilities. This can potentially drag down the real-side economy once that pyramid starts to crumble.

One may think that these challenges are the domain of advanced economies and their sophisticated financial systems. After all, that is where the recent global financial boom-bust originated. Think twice. As shown by Claessens and Ghosh, emerging market economies (EMs) have to cope with even greater challenges when it comes to managing the implications of macro-financial linkages, particularly due to their propensity to heighten booms and busts.

This is due to two reasons. First, EMs are more likely to suffer shocks, such as commodity-price and terms-of-trade shocks, as well as surges and sudden stops in capital flows. It is not only a matter of frequency, but also of magnitude relative to domestic economies and the size and depth of their financial markets. As Swati and I remark in the book's overview:

On average, total net private capital flows relative to M2 [a measure of the quantity of money in an economy] over 2000-10 has been some factor 100 times that for advanced countries (ACs). As a share of local capital markets, financial flows in EMs are thus much larger than in ACs, and certainly more volatile. Also foreign bank presence is greater -- more than double -- in EMs than in ACs. Unsurprisingly, therefore, shocks to capital flows and foreign banks' operations can have significant impacts on EMs' domestic financial and real sectors. Perhaps more importantly, the amplification of shocks tends to be larger in EMs.

Second, structural and institutional features typical of most EMs tend to amplify and propagate shocks. Despite substantial progress since the 1990s, the overall quality of regulatory institutions, the strength and enforceability of legal regimes, market discipline upon financial institutions, levels of information disclosure and transparency, corporate governance arrangements, the width of investor bases, the availability of hedging instruments, and other financial-sector supporting factors still have room to grow. In such a context, investor confidence is prone to fluctuate more violently before and after shocks.

Claessens and Ghosh identify capital inflows and their potential for sudden stops as main sources of risk and shock for emerging markets. Canuto and Cavallari, in turn, approach the challenges faced by monetary policy-makers and financial regulators. Luiz Awazu Pereira da Silva and Ricardo Eyer Harris and Jong Kyu Lee respectively approach the recent experiences of Brazil and Korea.

Claessens and Ghosh also empirically show that the interaction of real and financial cycles tends to be sharper in EMs than in advanced economies, with both recessions and recoveries more often overlapping with financial events. Furthermore, the real-side impact is much larger. From1960 to 2012, cumulative GDP losses associated with different adverse financial events were typically higher in EMs (Chart 1) 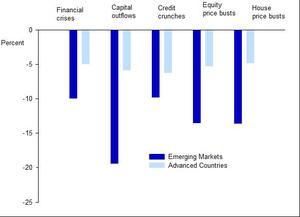 Source:
Canuto and Ghosh
, upon
Claessens and Ghosh

Bottom line: even when asset price-led cycles are not generated within EMs, they tend to be affected the most due to capital flows. This reminds me of an old Swahili proverb: