It's as a media guy that I've gotten really fascinated by elephants. In large part, anyway.

Along with many pachyderm enthusiasts around the world, I've long been in awe of these animals' gigantic majesty, their social cohesion and their well-appreciated smarts -- including, of course, that renowned and enviable memory of theirs. 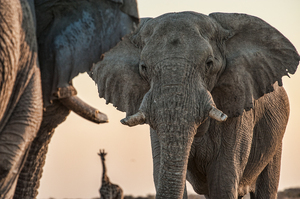 But their skill as masterful communicators is what has come to impress me most of all.

We owe our growing knowledge of their highly sophisticated communications systems to a fine lineage of animal behavior researchers, scientists who are in very large part women, as it happens. That's perhaps, only perhaps, connected (some have told me) with the strong matriarchal nature of elephant society.

Thanks must go to Cynthia Moss for starting Kenya's Amboseli Elephant Research Project back in 1972 (just when I was first getting to know elephants in that same national animal reserve of Amboseli). Her work over the decades has revealed some extraordinary complex mechanisms by which elephants message one another, often over great distances.

Moss's investigations seem unstoppable, as she has more recently turned to detailing the extent of inter-species comprehension in elephants -- she was part of a study published last year by Proceedings of the National Academy of Sciences demonstrating that elephants can distinguish -- purely by ear, it seems -- the age, gender and even ethnicity of humans whose voices can be heard nearby but are out of sight.

Katy Payne of Cornell University also broke molds when she charted the sub-sonic "rumbling" by which elephants can communicate over many miles. (The eureka moment for her evidently came in associating that rumbling with her own sense-memories from childhood, when she had felt her stomach throbbing in response to a church organ's lowest notes.) 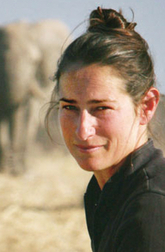 Another generation of elephant women is now represented by Caitlin O'Connell (left) of Stanford University. She has taken our understanding in a wholly new direction by exposing how elephants "talk" to each other not merely through the air (via sound-waves, either within or outside of our own human hearing-range) but also through the ground.

O'Connell's detailing of the great beasts' seismic -- or "vibro-tactile" -- messaging (published by the American Physiology Society) was little short of astounding. An elephant, she showed, can send information underground to other elephants, even many miles away, which will be received (through highly sensitive mechano-receptors in the pads of their huge feet, it appears), decoded and answered via the same medium.

Her discoveries were dramatically underscored by the Asian elephants who received, and sent out, early warnings of the huge 2004 Indian Ocean earthquake and tsunami. Working elephants in Thailand's tourism industry became deeply agitated and fled to higher ground before the devastating tidal wave struck, so managing to save themselves and many tourists riding on their backs. 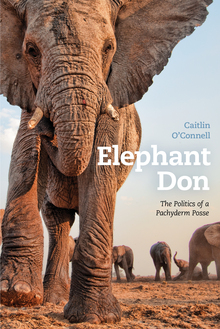 O'Connell's own latest communications come not in an academic journal or treatise, but in decidedly more popular realms of publishing. The first is "Elephant Don" (from University of Chicago Press), a highly engaging and at times deeply affecting personal memoir of her years monitoring elephant society.

The title is drawn from the world of organized crime. "Don" is not a name; it's a label -- as with a "don" in the mob -- here applied to the often swaggering lead figure in a particular group of male elephants that she studied in Namibia. His real name -- given by O'Connell, at least -- is Greg. Her skillful narrative amplifies her gangland parallel fully and convincingly -- it neatly brings alive the book's alliterative subtitle, The Politics of a Pachyderm Posse.

The photo reproduced near the top of this article comes from the book and shows Greg (at right) facing off, in typical glaring mode, against another aggressive male.

Altogether the 256-page volume displays to advantage O'Connell's consistent life-mission, which she once described to me very straightforwardly: "As a scientist, I try to bridge the gap between science and the public in many different ways." 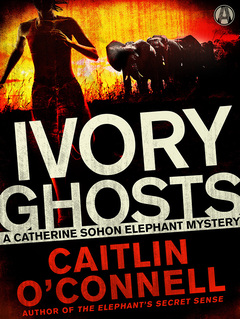 Another of those different ways is evident in a second new book from her, issued almost simultaneously with Elephant Don, and even more populist in flavor. It's a crime thriller, Ivory Ghostspublished by Random House.

It tells the story of an elephant researcher (female... and with no similarities to Dr. O'Connell, I am sure!) who works in southern Africa and ends up fighting murderous poachers and smugglers -- murderous of humans as well as elephants, that is.

It's a classically fast-paced read, a good pulse-racing example of its genre, and, yes -- it contrives also to provide us with compelling illustrations of just how elephants communicate.